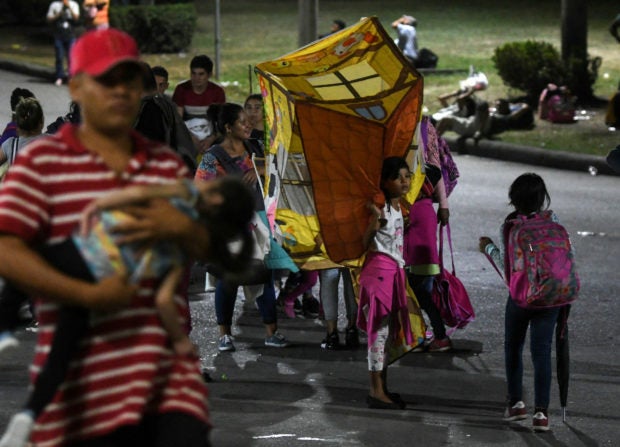 Honduran families are waiting to board a bus leaving the Metropolitan Center of San Pedro Sula, 300 kms north of Tegucigalpa, to travel to the Guatemala border on April 9, 2019. – At least one thousand of Hondurans migrants including women and children were convened by social medias to a new caravan to the US. About four caravans of 2,000 hondurans left San Pedro Sula between October 2018 and January 2019 escaping violence and poverty. (Photo by ORLANDO SIERRA / AFP)

“There are more than 800, almost a thousand,” a police official told AFP, with the Red Cross reporting the same number.

The caravan, which followed a call on social media, took the authorities by surprise after similar appeals since February failed to muster numbers.

Many families with children were among those gathered, and some have already started their journeys in crowded minibuses.

Alexis Perez, 27, said: “We are done with this government, there is no work.”

Since October 13, when the first caravan of 2,000 set off, three other similar convoys of migrants have left Honduras for the US in search of work or fleeing drug-traffickers.

The groups are a target of President Donald Trump, who has vowed to tighten migration policy and build a wall to stop them from entering the United States through Mexico.

Several thousand Central Americans have trekked across Mexico by caravan since last year, fleeing poverty and violence in their home countries.

They travel en masse in hopes of finding safety in numbers against Mexican gangs that regularly extort, kidnap and kill migrants, sometimes in collusion with local authorities./gsg