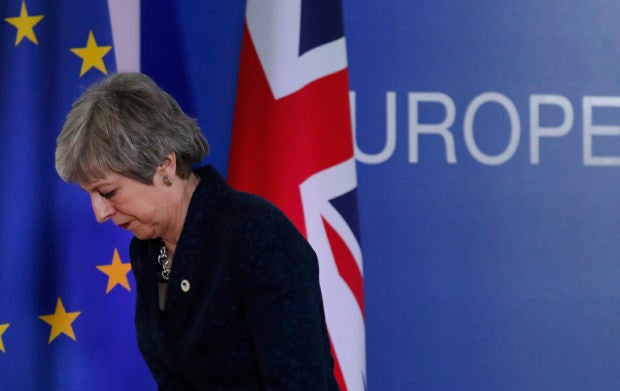 In this Friday, March 22, 2019 file photo, British Prime Minister Theresa May leaves after addressing a media conference at an EU summit in Brussels. May is off to Brussels to ask for a delay to Britain’s departure from the European Union. EU leaders want to know she has a plan to break the U.K.’s political impasse, but talks between the government and its political opponents over a compromise have yet to bear fruit. Meanwhile, Britain is scheduled to leave the EU in two days on April 12, 2019. (AP Photo/Frank Augstein, File)

BRUSSELS – Just days away from a potentially calamitous no-deal Brexit, European Union leaders meet Wednesday to discuss granting the United Kingdom a new delay — possibly of up to a year — to its departure from the bloc.

It’s likely to be a rough day for British Prime Minister Theresa May as she pleads for a second extension until June 30, to prevent Britain’s scheduled departure from the EU this Friday.

European Council President Donald Tusk has suggested an even longer delay of up to a year with conditions attached to ensure Britain does not stymie EU decision-making if it remains a member.

Britain’s Brexit Secretary Stephen Barclay told the BBC he doesn’t want a delay of up to a year.

“But, the key with any delay is we are able to terminate it once we ratify in order that we can then get on and get a deal through Parliament, ratify that agreement and leave the EU,” he said.

May arrives in Brussels for a pre-summit meeting with Tusk before explaining her delay request to the leaders who will then discuss their next move.

If they don’t grant an extension, Britain leaves the bloc on Friday with no deal regulating the departure.

A drastic cliff-edge exit would have huge costs to businesses and trade across the English Channel and be very cumbersome to travelers as it would likely hit airports, ports, tariff rules and standard regulations overnight.

EU countries, especially France, have become increasingly exasperated with the political division and uncertainty in Britain about a way forward.

The bloc’s leaders have tried to help May over two years of negotiations, even after she missed her hand-picked Brexit departure date on March 29 because of a parliamentary revolt.

Seeking support from European heavyweights Tuesday, May flew to Berlin and Paris to plead for good terms with German Chancellor Angela Merkel and President Emmanuel Macron, who has been taking a tough stance ahead of the Brussels summit.

May’s charm offensive appeared to bear fruit with an official in Macron’s office saying that France was ready to accept a new delay.

While Macron still has a long list of conditions, it was a notable shift in France’s tone compared to last week.

The reason for the change was unclear, though concerns have been growing about how badly a hard Brexit would hit the French economy, too. France was also encouraged by May’s outreach last week to Britain’s political opposition to find a compromise, and Macron may have been swayed in part by a meeting with the Irish prime minister.

Among conditions France is now setting to agree to a new delay: A “credible prospect” of some kind of solution to the British political deadlock.

A promise that Britain won’t keep asking for more delays. And guarantees that Britain would not be involved in future EU decisions while its Brexit drama is playing out.

“The longer the extension might be, the more guarantees are needed,” the French official said, speaking on condition he not be named in keeping with presidential policy.

Every British initiative to get a deal has floundered so far. Several days of talks between May’s Conservative government and the main opposition Labour Party aimed at finding a compromise Brexit deal have failed to produce a breakthrough.

Labour favors a softer Brexit than the government has proposed, and wants to retain a close economic relationship with the bloc. /gsg