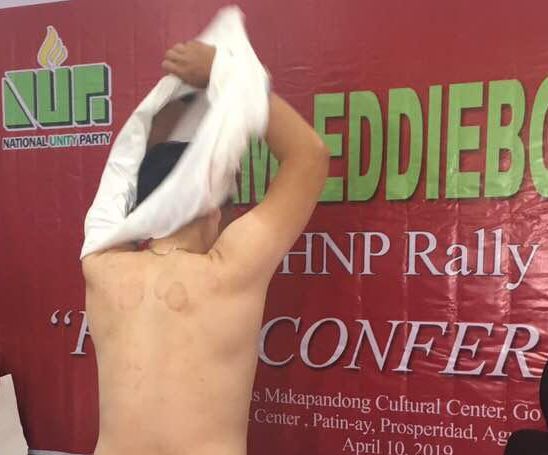 In a press conference in Prosperidad on Wednesday morning, Go turned to his back as he took off his white campaign polo shirt to show that his back was unblemished.

“Para matapos na itong istorya (Let’s put an end to all these talks),” said Go after showing his back to reporters.

Go did the back-baring pose amid allegations that he has a dragon tattoo that showed his membership to drug syndicates, and that he has been using drug money for his campaign.

Go vehemently denied claims contained in the third segment of the videos released by a certain “Bikoy” on Tuesday, April 9, who accused the former presidential aide of having four bank accounts where supposed drug money totaling around P3 billion were allegedly being funneled through from 2010 to 2018.

The hooded self-confessed former drug syndicate member in the video entitled “The Real Narcolist-Episode 3” alleged that Go was using the codename “TESOROGOLF-TSG-002” and that the former Cabinet official is sporting a dragon tattoo on his back.

Go said he suspected that the supposed whistleblower, who also implicated the First Family in the illegal drug trade, was in fact the real drug lord.

Bikoy has also made a similar claim against presidential son and former Davao City vice mayor Paolo “Pulong” Duterte during the first segment of his so-called exposé.

Unlike Go, however, the young Duterte has refused to bare his back and would not say whether or not he had a tattoo. Instead, Pulong challenged his critics to get their own tattoo.

“Klaro ha? Ito ang tatak ko (It’s clear. This is my tattoo),” Go said, pointing to the number 34 emblazoned on the back of his red polo shirt, which he changed into after taking off his white campaign shirt.

With his revelation, Go said he was hoping allegations of his supposed involvement in illegal drugs would stop even as he reiterated his support to President Duterte’s campaign against narcotics trade, criminality and corruption.

“President Duterte said even if it would cost his freedom when the time comes, and I know he is just doing his job. I would go with him in prison if necessary,” Go said./ac