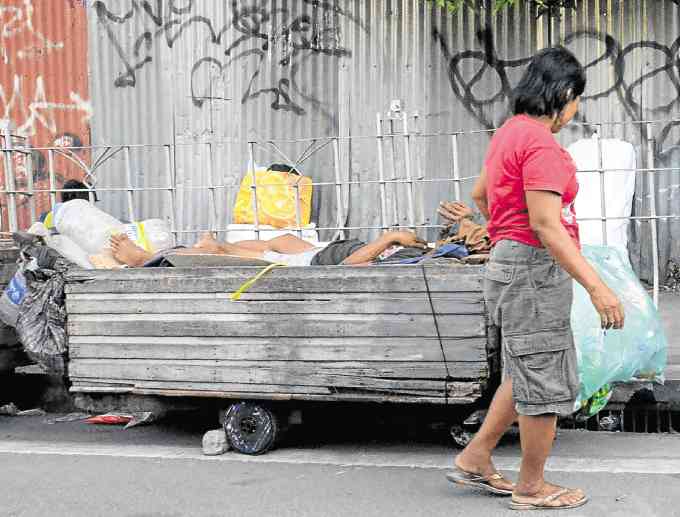 People sleeping in carts, like this family in Manila, are familiar sights in many highly urbanized areas in the country. INQUIRER FILE / ARNOLD ALMACEN

MANILA, Philippines — The number of poor Filipinos fell by 6.6 percent in the first half of 2018 compared to the same period in 2015, the Philippine Statistics Authority (PSA) reported Wednesday.

This translates to 23.1 million Filipinos living below the poverty threshold in the first half of 2018.

Poverty incidence is the proportion of the population living below the poverty line to the total Filipino population.

National Economic Development Authority (Neda) Undersecretary Adoracion Navarro attributed the decrease in the “sustained economic growth and critical and broad-based reforms and investments that have translated to employment generation and social protection.”

Meanwhile, poverty incidence among Filipino families clocked in at 16.1 percent in the first half of 2018, also lower than the 22.2 percent recorded in the same period in 2015.

The National Capital Region (NCR) had the highest average poverty threshold at the regional level in the first semester of 2018.

During the first half of 2018, a family of five needed around P10,481 per month to meet their minimum basic food needs and non-food needs, the PSA further noted.

However, a family of five living in the NCR needed at least P11,752 per month to meet their minimum basic food needs and non-food needs during the first half of 2018. /cbb