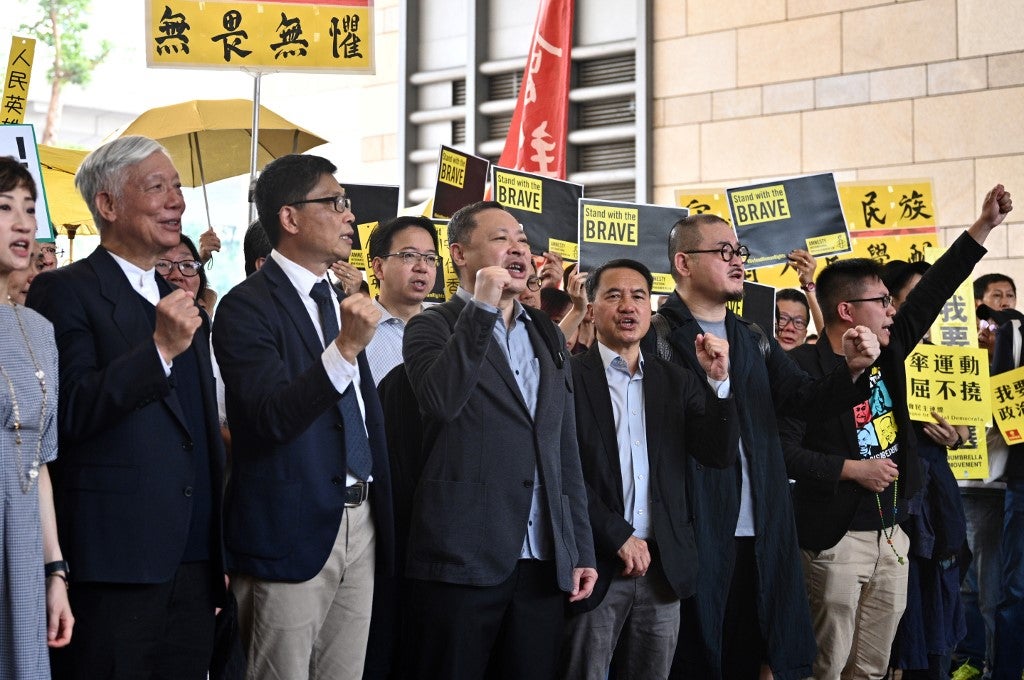 HONG KONG, China – A group of Hong Kong activists face jail after being convicted Tuesday on colonial-era “public nuisance” charges for their role in organizing mass pro-democracy protests that paralyzed the city for months and infuriated Beijing.

The convictions followed a trial that has renewed alarm over shrinking freedoms under an assertive China which has rejected demands by Hong Kongers asking for a greater say in how the financial hub is run.

Nine activists were all convicted on Tuesday of at least one charge in a prosecution that deployed rarely-used colonial-era public nuisance laws over their participation in the 2014 Umbrella Movement protests, which called for free elections for the city’s leader.

It is the latest blow to strike the beleaguered pro-democracy camp which has seen key figures jailed or banned from standing as legislators since their civil disobedience movement convulsed the city but failed to win any concessions.

Among the most prominent members of the group on trial were sociology professor Chan Kin-man, 60, law professor Benny Tai, 54, and Baptist minister Chu Yiu-ming, 75.

The trio founded the pro-democracy “Occupy Central” movement in 2013, which joined the student-led Umbrella Movement a year later that brought parts of the city to a standstill for months.

Of the remaining six defendants — a group of younger protest leaders, including two sitting lawmakers — all were convicted of at least one public nuisance charge.

In an unusual move prosecutors tried the group under Hong Kong’s common law system, which carries a much steeper sentence than statutory public nuisance laws.

Each protest leader could now face up to seven years in jail, rather than three months had the charges been brought under statutory law.

Judge Johnny Chan ruled that the 2014 protests, which took over key intersections for many weeks, were not protected by Hong Kong’s free speech laws because the demonstrations impinged on the rights of others.

“The unreasonableness of the obstruction was such that the significant and protected right to demonstrate should be displaced,” he said. “The act was one not warranted by law.”

The defendants remain on bail with the court expected to continue hearing mitigation arguments in the coming days before handing down sentences.

There were emotional scenes on Tuesday afternoon as the oldest defendant, Reverend Chu, delivered a statement in which he described the dock as “the most honorable pulpit of my ministerial career”.

“The bell tolls. It gives out a warning sound, that something bad and disastrous is happening,” he said.

In a submission sent to journalists fellow defendant Shiu Ka-chun added: “I want to warn the authoritarian government, even if you kill all the roosters, you cannot stop the dawn’s arrival.”

Human rights groups and critics hit out at the convictions, saying the use of the vaguely worded public nuisance laws — and wielding the steeper common law punishment — would have a chilling effect on free speech in Hong Kong.

Chris Patten, the last British governor of Hong Kong, said it was “appallingly divisive to use anachronistic common law charges in vengeful pursuit of political events which took place in 2014.”

Chinese foreign ministry spokesman Lu Kang fired back at those criticisms, saying other countries would also have brought such a prosecution to “maintain order”.

“The central government resolutely supports (Hong Kong) in punishing the main organizations and planners of the illegal Occupy Central movement in accordance with the law,” he told reporters.

Hong Kong enjoys rights unseen on the Chinese mainland, which are protected by the 50-year handover agreement between Britain and China, but fears are growing that those liberties are being eroded as Beijing flexes its muscles.

At the trial, prosecutors argued that the mass protests had caused a “common injury done to the public”, who had been affected by the blockage of major roads, and that the leaders of the movement deserved to be punished.

In his verdict, Judge Chan denied his ruling would impact the ability of Hong Kongers to protest.

The Occupy movement highlighted widespread frustration, especially among the young, over Hong Kong’s direction but failed to win any reforms from Beijing. /cbb