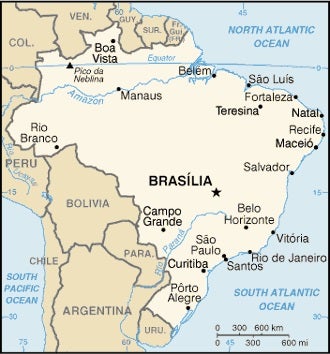 RIO DE JANEIRO, Brazil – Brazilian soldiers opened fire on a family driving to a baby shower in Rio de Janeiro, riddling their vehicle with more than 80 bullets and killing one of the occupants, reports said Monday.

Ten army personnel have been arrested over Sunday’s incident, which also wounded two others, on suspicion of “failure to comply with rules of engagement,” the military said in a statement.

Five people were inside the vehicle, including a seven-year-old boy, who was unhurt.

The soldiers had been on the look-out for a car-load of criminals during a regular patrol of the area secured by the military, the military statement said.

“Everything indicates that the military really confused the vehicle for a vehicle of robbers,” Salgado said.

No weapons were found in the car, which belonged to “a normal family who ended up being victims of the military,” he added.

“I don’t see a legitimate defense for the number of shots.”

In its statement, the military said it was committed to “transparency and legal parameters imposed by the rule of law on the legitimate use of force by its members” and opposed “excesses or abuses that may be committed when carrying out their activities.”

Army patrols had already been used in the impoverished favelas but the military intervention saw generals replace civilian authorities in top security jobs, as well as an increase in the use of soldiers to back up police.

The intervention was unheard of after the country’s return to democracy in 1985 ended 21 years of military rule.

In Witzel’s first two months in office, 305 people were killed by police, according to government statistics, or one such death every four and a half hours.

That is a 17.6 percent increase compared to the same period in 2018, and a record high for the 16 years that statistics on police-involved killings have been kept.

Witzel recently told local media that snipers had been deployed in the city. /cbb