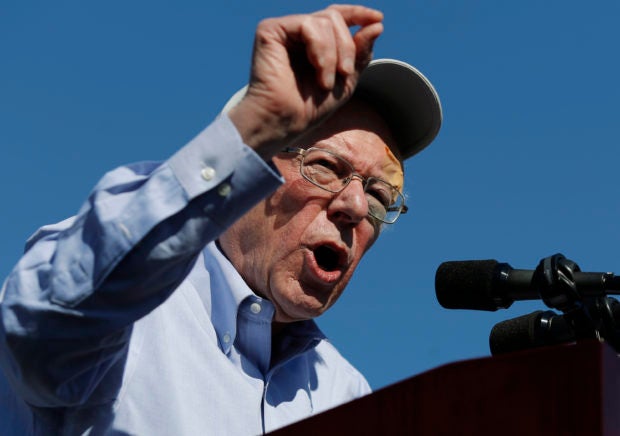 FILE – In this March 16, 2019, photo, Democratic presidential candidate Sen. Bernie Sanders, I-Vt., speaks at a rally in Henderson, Nev. One of the big questions facing Sanders is whether he could translate his upstart success from 2016 into front-runner status in 2020. So far, the answer is yes. (AP Photo/John Locher)

DAVENPORT, Iowa – Vermont Sen. Bernie Sanders is quieting critics who questioned whether he could recapture the energy of his upstart 2016 campaign, surpassing his rivals in early fundraising and establishing himself as an indisputable front-runner for the Democratic presidential nomination.

Less than two months into his second White House bid, no other declared candidate in the crowded Democratic field currently has amassed so many advantages: a $28 million war chest, a loyal and enthusiastic voter base and a set of clearly defined policy objectives.

That puts Sanders on markedly different footing than during his first White House run, creating new challenges for a candidate whose supporters relish his role as an underdog and an outsider.

He now carries the weight of high expectations and will face heightened scrutiny over everything from the cost and feasibility of his government-funded policy proposals to his tax returns, which he has not yet released.

He initially blamed “mechanical issues” for the delay, and his campaign now says he wants to wait until after the April 15 tax filing deadline to fulfill his promise to release a decade worth of returns.

Sanders has largely embraced his new front-runner status. More than any other candidate, he draws explicit comparisons with President Donald Trump in his campaign remarks, previewing his approach to a general election faceoff with the incumbent Republican.

Behind the scenes, Sanders is also building out a larger, more diverse campaign operation, responding to criticism that his 2016 organization skewed too heavily white and male.

Still, Sanders’ message and style hasn’t changed from 2016, when he stunned many Democrats by mounting a formidable challenge to Hillary Clinton and besting her in more than 20 primary contests.

After briefly acquiescing to his advisers’ suggestions that he reveal more about his upbringing and personal history, Sanders has returned to his comfort zone: delivering lengthy campaign speeches chockablock with the same policy prescriptions he campaigned on during the 2016 campaign.

“With your help, we are going to complete what we started here,” Sanders told the 1,200-person crowd, referring to his virtual tie with Clinton in the 2016 Iowa caucuses.

Sanders’ approach underscores his belief that his success in 2016 was not a fluke or simply a function of being the next best alternative to Clinton.

His advisers argue the populist economic message Sanders has espoused for years, often in obscurity, has now been embraced not only by a slew of his Democratic rivals, but also Trump./gsg