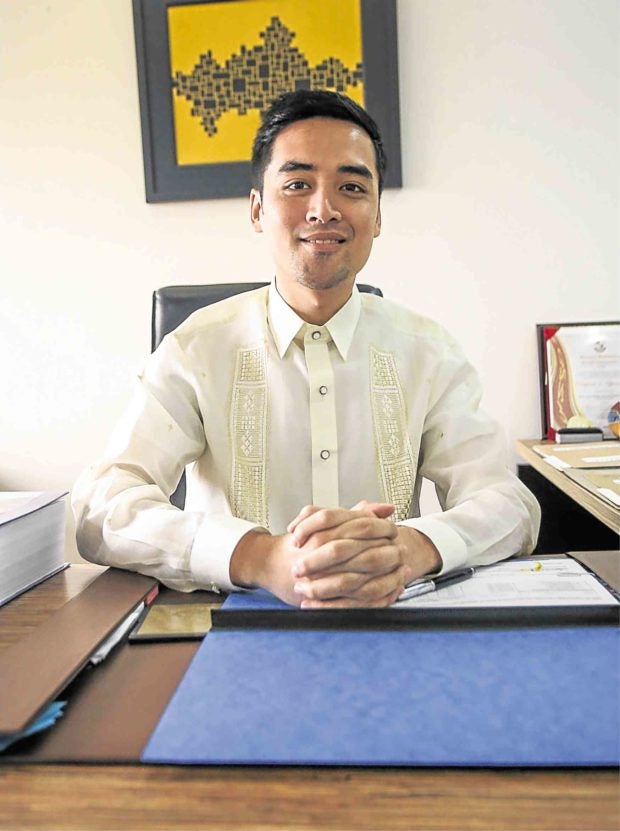 UNEXPECTED CONTENDER The 29-year-old Vico Sotto says he did not set out to run for Pasig mayor but he saw the need for change in the city. —JAM STA. ROSA

MANILA, Philippines — In August 2018, the Philippine National Police called a press conference to prop up President Rodrigo Duterte’s claim that Naga City, the hometown of Vice President Leni Robredo, was a “hotbed” of illegal drugs.

The briefing, however, became controversial after Police Gen. Oscar Albayalde, the PNP chief, mistakenly said Naga was the country’s fifth most crime-ridden city. The number actually referred to Region 5 (Bicol region), where Naga is located.

As netizens exploded in anger, one voice stood out — that of Pasig City Councilor Victor Ma. “Vico” Sotto, who had just been to Naga.

“It really is a hotbed here!” Sotto tweeted in Filipino, before adding, “Hotbed of citizen empowerment and participation in governance!!!” His tweet racked up thousands of likes, drawing attention to the low-key Pasig official with a high-profile last name.

Eight months later, participatory governance is a core tenet of Sotto’s messaging as he runs for Pasig’s highest post. Should he win, the 29-year-old would be Metro Manila’s only millennial chief executive and the city’s first mayor with a different surname.

Sotto was bullish about his chances when he spoke recently to the Inquirer, even as he acknowledged his inability to match the money and machinery of the Eusebios — the family at the helm of the country’s fourth richest city since 1992.

Weapon is the message

“Our weapon is the message,” Sotto said. “Our message is — we see how poverty has not improved for 27 years, how the rich have benefited but the poor have not. Right now, the momentum for that message is growing.”

He is remarkably disciplined about sticking to that message, seemingly loath to bank on the star power of his parents, show business icons Vic Sotto and Connie Reyes, or the political heft of his uncle, comedian turned Senate President, Vicente “Tito” Sotto III.

The young Sotto is focused instead on heralding a new era that will mark not just a familial and generational shift in power, but a breakdown of the entire power structure itself. He said Pasig, bogged down by a “culture of patronage, fear and corruption,” would forge ahead with a “new style of politics.”

Sotto rattled off what this meant, operationally — regularizing government employees to “insulate them from politics,” distributing benefits more equitably, and enshrining anticorruption measures into city hall systems. But the overarching theme, he said, was inclusivity.

“Let’s treat Pasigueños not just as beneficiaries, but as partners. If we treat our citizens as partners in governance, the services that we give to them will be more responsive, and will become better,” Sotto said.

But first, he must beat incumbent Mayor Robert “Bobby” Eusebio in a matchup that has been likened to the biblical battle between David and Goliath.

Sotto is, in fact, almost a one-man army. Running under Aksyon Demokratiko, he has no candidates for vice mayor or councilor.

Sotto is aware about how brazen it must seem for a first-term councilor like him to take on Eusebio. He knows he will need to parry doubts about his age and qualifications. But running for mayor, he insisted, wasn’t the original plan.

Sotto emerged as the top councilor in Pasig’s first district in 2016, one of three independent candidates. Three years later, he is the only one left.

“I didn’t even attempt to join their party,” Sotto said of the Eusebios. “My advantage is they can’t punish me because I don’t get anything from them anyway. I don’t owe them a debt of gratitude.”

Yet, he still managed to enlist his fellow councilors’ support for his pet ordinance, which was passed in October. Dubbed the “Pasig Transparency Mechanism Ordinance,” it made history as the first local version of a freedom of information (FOI) bill to be passed in Metro Manila.

Whereas most politicians zealously avoid FOI measures, Sotto dove straight into the effort, equipped with a fellowship from the Iowa Public Information Board in the United States.

“The first step of good governance is really transparency,” he said. “You want people to participate in decision-making, but if they don’t have information, then it will be a token form of participation.”

Sotto’s brand is built on his willingness to touch on issues that are often a political no-man’s land. He has proposed mandating that civil society groups monitor all government bidding. He has also thrown his support behind an antipolitical dynasty law so stringent it will bar him from running.

For the councilor who has a political science degree aside from a master’s in public management from Ateneo de Manila University, the fascination has always been with governance rather than politics.

Over a three-hour interview, he talked about the city’s P10.7-billion budget, which he said was more than enough to implement his top priority of universal healthcare in Pasig. Based on his estimates, it would cost about P3,000 per head.

“We have two city hospitals, one national hospital [and] a bunch of health centers, but their medicines are always out of stock,” Sotto said. “There can’t be any good reason [for this] because the budget is big.”

A lifelong Pasigueño, Sotto speaks regularly of the city’s two faces—the prosperous western area anchored by Ortigas, and an impoverished eastern portion that has deteriorated.

It remains to be seen whether his new brand of politics will make him win.

But in a capital long dominated by political dynasties, the verdict is sure to carry implications far beyond Pasig City.

“It’s difficult to run a campaign focused on issues and not personality and money, which is the traditional model,” Sotto said. “But if we keep building momentum, it’s going to be very difficult to stop that ball from rolling.”