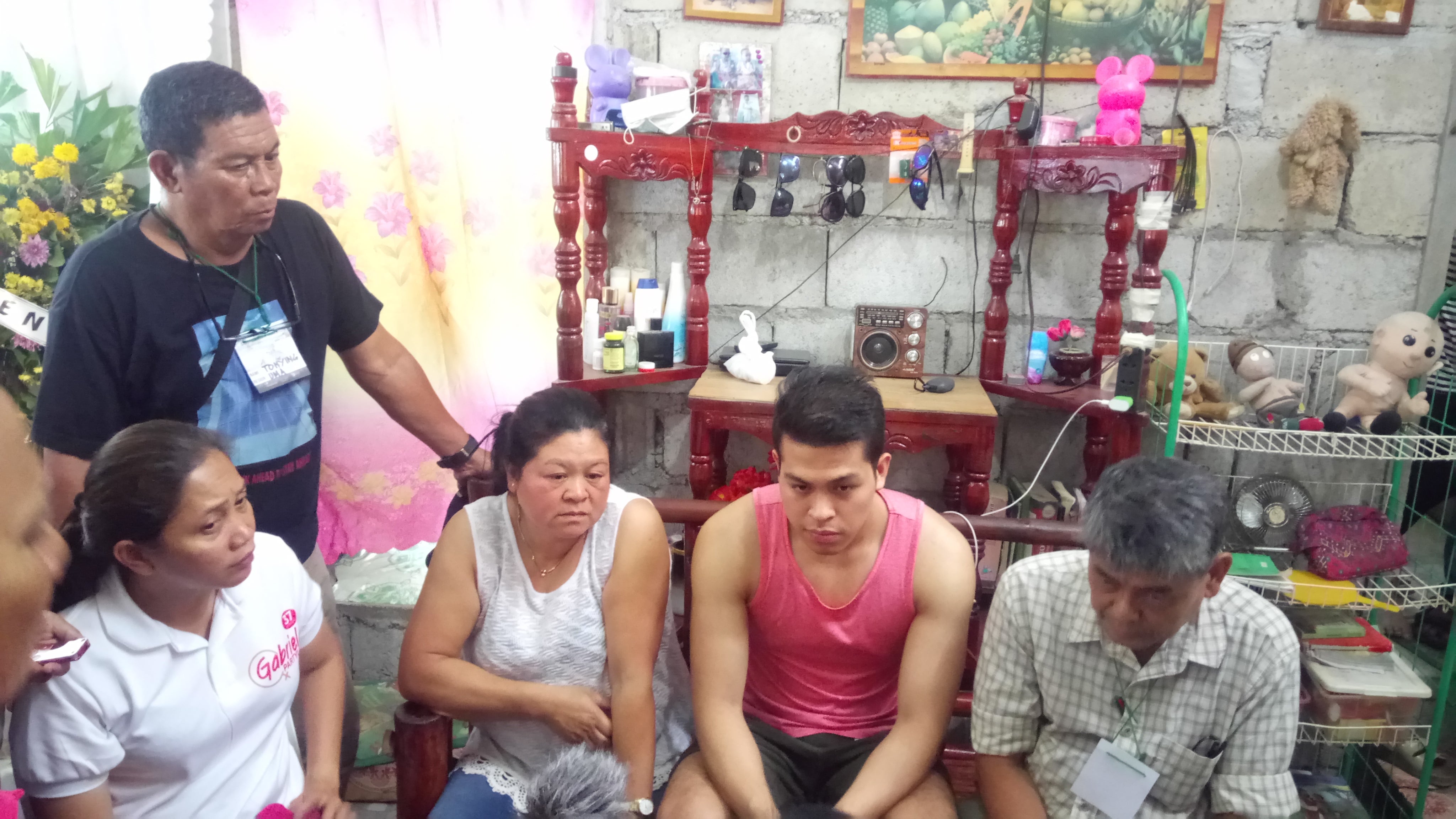 BACOLOD CITY — The 14 farmers who were killed in joint police and military operations in two towns and a city in Negros Oriental province on March 30 were also robbed of cash and valuables, according to the victims’ relatives.

The allegations by the kin of at least two of the slain farmers came even as Malacañang stood behind Gen. Oscar Albayalde, the Philippine National Police chief, and asked the people not to be swayed by “communist propaganda.”

Argie Acabal, son of Valentin Acabal, barangay chair of Candabong in Manjuyod town, said policemen took P37,000 cash when they barged into their house and killed his father.

“They took the P30,000 I sent to my family. They also took the P7,000 that was kept in a locked box. The P7,000 is from the church where my mother is a treasurer,” said Argie, an overseas Filipino worker in Qatar, who returned home after learning of his father’s death.

According to Valentin’s wife, Angenate, the policemen roused them from sleep and then shot her husband as he pleaded for his life.

She said her husband suffered seven gunshot wounds in the body, including the genitals.

Acabal was one of the 14 farmers who were killed in an alleged shootout with policemen and soldiers who were separately serving search warrants to the victims around 1 a.m. on March 30.

Ordered out of house

Aside from Acabal, three others died in Manjuyod, two in Santa Catalina town and eight in Canlaon City.

Carmela Avelino, Edgardo’s wife, said she and her two children were ordered out of their house before her husband was killed while also pleading for his life.

She accused the policemen of taking their two cell phones, an electronic tablet and P2,000 cash.

Albayalde earlier said the subjects of the warrants were members or supporters of the communist New People’s Army (NPA), a claim refuted by the victims’ families.

Lawmakers from the militant Makabayan bloc in the House of Representatives and human rights groups earlier denounced what they described as a “massacre” and demanded Albayalde’s resignation as well as an impartial investigation.

But Malacañang said the PNP chief “had even acted objectively” by relieving four police officials in the province pending an investigation to find out if they followed proper operating procedures. 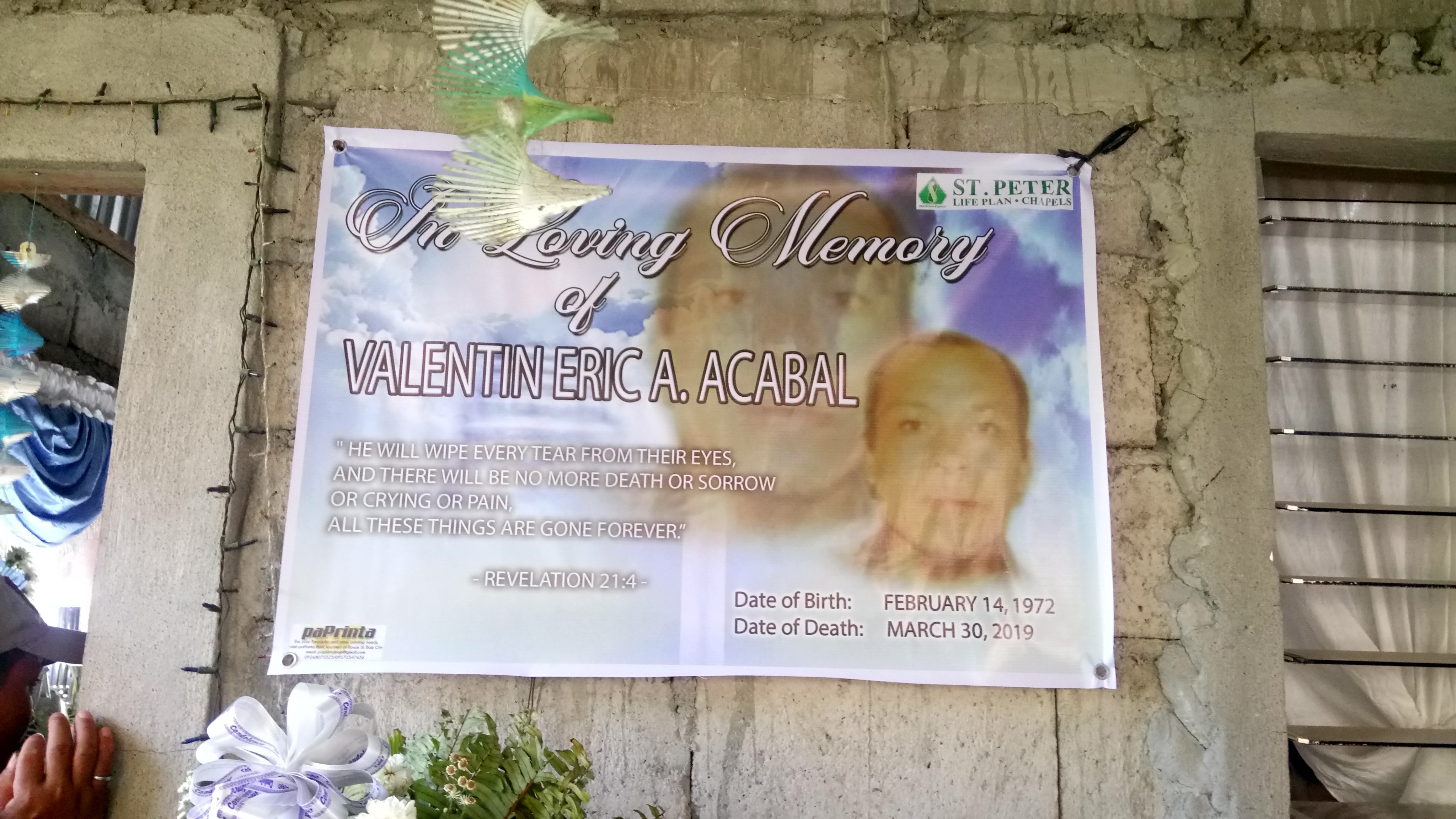 IN MEMORIAM Valentin Acabal was shot as he pleaded for his life, according to his wife. —CONTRIBUTED PHOTO

“There is absolutely no basis in fact and in law for PNP chief Albayalde to resign,” presidential spokesperson Salvador Panelo said in a statement on Friday night.

Abayalde on Thursday said he would not resign.

The militant lawmakers should themselves resign out of “delicadeza” for “enjoying the perks and privileges  shouldered by the Filipino people” while supporting the cause of groups that call for the “violent overthrow of the constitutionally elected government,” he said.

But Bishop Gerardo Alminaza of the San Carlos City diocese belittled the relief of the four police officials, saying they were not aware of the operations since these were carried out by the Police Regional Office in Central Visayas based in Cebu City.

Panelo said the incident “arose from a legitimate police operation.”

It was “unfortunate,” he said, that Karapatan and other human rights groups were using the incident “to sow hate and fear toward our duly constituted authorities.”

“[W]e urge the public not to be swayed by leftist propaganda, especially those stemming from groups linked to the Communist Party of the Philippines and the [NPA], designed to stigmatize each and every operation of our law enforcers intended to protect the general welfare and safety of the Filipino people,” Panelo said.

“Authorities were implementing search warrants that were duly issued by competent courts,” he said, adding that the policemen “lawfully apprehended” those who “surrendered without forceful resistance.”

According to the police, 15 other farmers who were also subject of the search warrants were arrested in the simultaneous operations.

“In fact, a policeman was wounded [in the operations], which goes to show that there were indeed some who used violent resistance when authorities were conducting the search,” Panelo said.