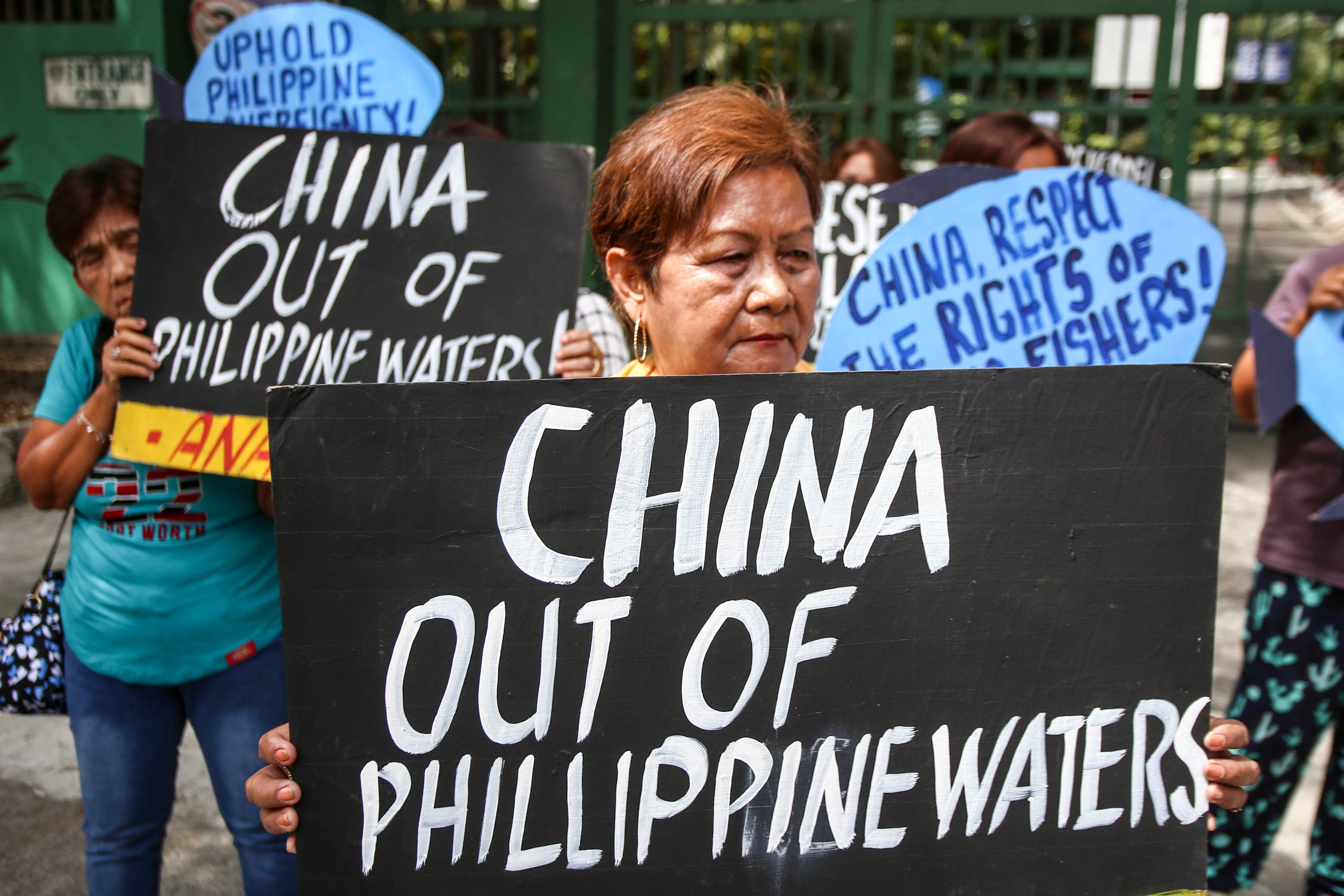 ANTIDREDGING, ANTI-CHINA The opposition to a plan to dredge sand from Lobo River in Batangas province for use in the expansion of the Hong Kong international airport on Friday in Lobo town also was a protest against Chinese incursions in Philippine-claimed maritime territories and China’s moves to drive away Filipino fishermen from their traditional fishing grounds in the West Philippine Sea. —JAM STA. ROSA

The mayor of Lobo town in Batangas province on Friday asked fishery authorities to inspect the site where a 2,990-ton Chinese-manned dredging ship had dropped anchor to determine whether it had caused damage to marine life.

The MV Emerald, whose arrival on March 28 had alarmed residents of the fishing village of Lagadlarin, lifted anchor early on Friday and moved to the waters off the international port of Batangas in Batangas City, according to Commodore Artemio Abu, the Philippine Coast Guard’s Southern Tagalog district commander.

Mayor Gaudioso “Jurly” Manalo said he asked the Bureau of Fisheries and Aquatic Resources to check for possible damage on the coral reef and seagrass at the anchorage site, about 500 meters off Lagadlarin’s shores.

Lagadlarin is home to Lobo’s 30-hectare mangrove forest, a rich marine reserve where fish and sea turtles breed. Lobo’s waters are part of the Verde Island Passage marine sanctuary, the world’s center of the center of marine shorefish biodiversity.

Manalo said the local government would seek compensation for any environmental damage.

Abu told the Inquirer in a phone interview that Coast Guard divers found “no violations” during an inspection on Thursday.

“They’re saying there could be corals [that could have been damaged]. There are no corals there,” he added.

He said the divers found sand but no seagrass or corals on the seafloor.

The ship, a hopper dredger, was chartered by Seagate Engineering and Buildsystems to remove 2 million cubic meters of sand from a 6.5-kilometer section of Lobo River under a 2008 memorandum of agreement (MOA) with the municipal government. The flood control project would be at no cost to the local government.

Seagate was supposed to sell the sand for $2 per metric ton to Hong Kong-based Synergy Group Holdings Ltd. for the expansion of the Hong Kong international airport.

The project, however, stalled because Seagate lacked the required government permits, including one for dredging from the Department of Public Works and Highways (DPWH), and another for exporting mineral ore from the Mines and Geosciences Bureau.

That was the reason the Department of Environment and Natural Resources (DENR) on Wednesday suspended the three environmental compliance certificates (ECCs) it issued to Seagate in May and June 2018 for the desilting of the river’s mouth, foreshore and estuary.

Manalo said the MOA had been superseded by a 10-year contract in 2012 between the local government and another company, FS Suntan Sand Corp., which had already started dredging and desilting the river.

He also said the dredging system to be used by Seagate could lead to the collapse of the river dikes being built by the DPWH.

Mafriel Dimaano, Lagadlarin village chief, said his constituents, most of them fishermen, were “stressed” by the 19-m by 17-m ship’s unannounced arrival and its looming presence in their waters.

“Thank you for your prayer[s] and care to our marine sanctuary,” said Fr. Dakila Ramos of the Lipa Archdiocese Ministry on the Environment in a Facebook message after the ship departed from Lobo.

It was unclear how long the ship would stay in the Philippines. Seagate CEO and general manager Leo Campos said he would appeal the suspension of the ECCs and submit other requirements.

He was also awaiting a permit from the National Security Council (NSC), which gives the clearance for the operation of any foreign ship in Philippine waters.

In Manila, DENR Undersecretary Benny Antiporda said Seagate was set to face a “technical conference investigation.” If the company is found to have committed any violation, it will likely be slapped a “steep fine,” he added.

“They will be penalized, and it will be a big fine,” he said. —WITH A REPORT FROM PATRICIA DENISE M. CHIU