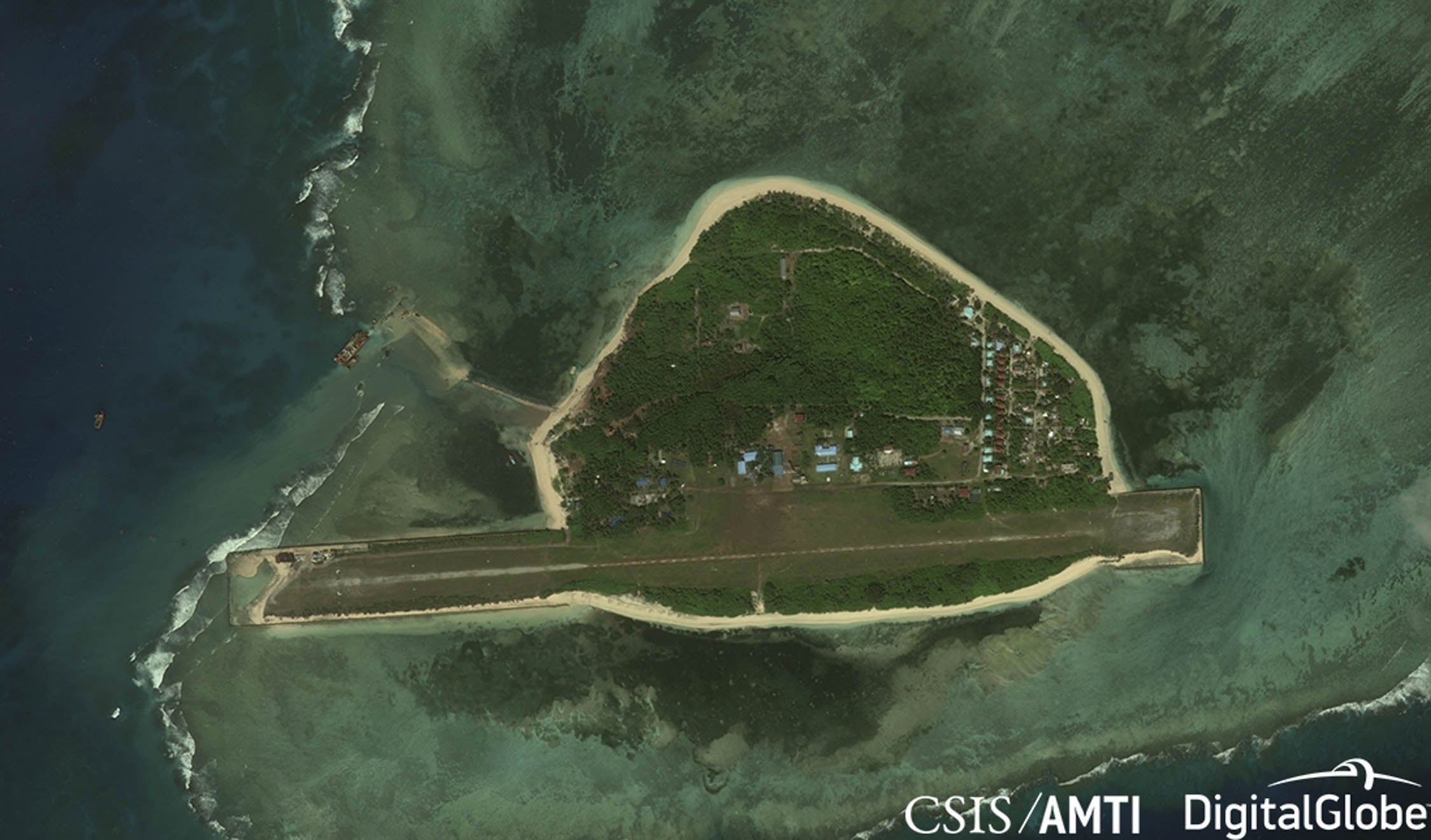 BIGGEST PH-HELD ISLAND The waters around Pag-asa Island have drawn about 275 Chinese vessels believed to be part of China’s maritime militia over the past three months as the Philippines repaired and reconstructed some of its facilities, including the washed-out portion of an airstrip seen in this Dec. 14, 2018, satellite picture. —PHOTO COURTESY OF CSIS/AMTI

President Duterte has told China not to “touch” Pag-asa Island, the largest in the Kalayaan Island Group occupied by Filipinos, otherwise he would send Philippine troops on a “suicide mission” in response.

The President, who spoke during a campaign rally in Puerto Princesa City, Palawan province, on Thursday night, said he was just giving “a word of advice,” not a warning, to Beijing.

“I am asking you, I will not plead or beg, but I’m just telling you, lay off the Pag-asa because I have soldiers there. And if you lay a finger on them, it’s another story. I will tell my soldiers, prepare for a suicide mission,” Duterte said.

“Let us be friends, but do not touch Pag-asa Island, otherwise, things would be different,” he said.

The President made the remarks following a report by the military’s Western Command that at least 275 Chinese vessels believed to be part of China’s maritime militia had been monitored around Pag-asa since January.

China’s claims to nearly all of the South China Sea, including Pag-asa, have been invalidated by the international arbitral tribunal in 2016 in a ruling on a case filed by Manila against Beijing, which has ignored the decision.

The President said he would rather strike a compromise than resort to an armed conflict with China because the Philippines was incapable of waging war over the West Philippine Sea.

“If I go to war, it will pulverize my Navy in a matter of minutes. And if I go to war with China, their missile will reach Manila in seven minutes,” he said during another campaign rally in Malabon City on Tuesday night.

Duterte has been criticized for taking a soft stance on China’s expansion in the South China Sea and for setting aside the arbitral tribunal’s ruling in favor of closer ties with Beijing in hopes of getting Chinese aid and investments.

Duterte on Thursday also expressed doubts on whether the United States, the country’s treaty ally, could send help “on time” in case the Philippines was attacked.

“America said it will help us because we have a US defense [treaty]. That’s a gamble. They say, ‘I have your back covered.’ They’re only good with words,” he said.

Duterte pointed out that the Americans still had to first get permission from their Congress before they could send help to the Philippines.

“Do I trust the Americans? Yes. But will that help be on time? That’s the problem,” he said.

During his visit to Manila last month, US Secretary of State Mike Pompeo assured the Philippines the United States would come to its defense if it came under attack in the South China Sea.

This was “the first time that the US made a [clear] policy statement that any attack on the Philippines will trigger a US response,” according to presidential spokesperson Salvador Panelo.

The Philippines, China, Vietnam, Brunei, Malaysia and Taiwan have overlapping claims in the Spratly Islands in the South China Sea.

On his Twitter page on Friday, Sen. Panfilo Lacson said that as “an elected senator of the republic and as a freedom-loving Filipino,” he would join the President on a visit to Pag-asa.

No Philippine President has visited the island. A visit by the  highest official of a country to a disputed territory would draw opposition from other claimants. The Philippines and Vietnam strongly protested Taiwan President Chen Shui-bian’s visit in 2008 to Ligao (Itu Aba) Island, the biggest island in the Spratlys chain.

Lacson also reminded Duterte that Pag-asa was a village in the “Municipality of Kalayaan, Province of Palawan, Mimaropa (Region IV-B), Republic of the Philippines.”

“We should not allow China to encircle, much less occupy, the island of Pag-asa. Let’s be reminded of what we sing every Monday morning, during our flag-raising ceremony,” Lacson said.

Lacson has been critical of the administration for displaying a defeatist stance in the maritime conflict with China, saying that would only embolden Beijing to further “bully” Manila.

The Department of Foreign Affairs (DFA) said it had lodged a protest with Beijing against what the military described as a “swarm” of Chinese vessels around Pag-asa.

“Such actions, when not repudiated by the Chinese government, are deemed to have been adopted by it,” the DFA said in a rare rebuke of China on Thursday.

The presence of the Chinese vessels near Pag-asa, also called Thitu Island, raises questions about their intent and role “in support of coercive objectives,” the DFA said.

Without referring directly to Manila’s protest, China’s foreign ministry spokesperson, Geng Shuang, said in Beijing that bilateral talks on the South China Sea held in the Philippines on Wednesday were “frank, friendly and constructive.” —WITH REPORTS FROM INQUIRER RESEARCH, AFP