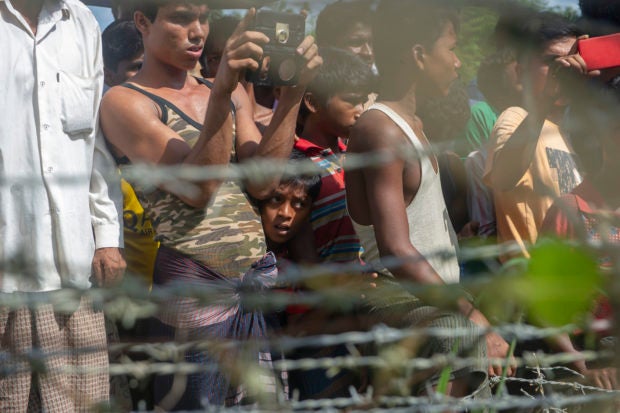 Rohingya refugees gather near the fence in the “no man’s land” between Myanmar and Bangladesh border as seen from Maungdaw, Rakhine state, on June 29, 2018.
Fewer than 200 Rohingya Muslims have been resettled in Myanmar’s northern Rakhine state from the 700,000 who fled a violent army crackdown in August that the US and UN have called ethnic cleansing. / AFP PHOTO / Phyo Hein KYAW / To go with AFP story: Myanmar-Bangladesh-Rohingya-refugee-unrest, FOCUS

BANGKOK — The main United Nations human rights agency expressed concern Friday about an upsurge in fighting between Myanmar’s army and guerrillas of the Rakhine minority’s Arakan Army, especially attacks on civilians by both sides.

A spokeswoman for the U.N. High Commissioner for Human Rights said in Geneva that the agency had “credible reports of the killing of civilians, burning of houses, arbitrary arrests, abductions, indiscriminate fire in civilian areas, and damage to cultural property.”

The spokeswoman, Ravina Shamdasani, said recent fighting in Rakhine state has led to the displacement of more than 20,000 civilians.

Rakhine is best known as the site of a brutal counterinsurgency campaign by the military against the Muslim Rohingya minority which caused more than 700,000 to flee to neighboring Bangladesh.

The Arakan Army, which is aligned with Rakhine’s Buddhist population, seeks autonomy for the region.

Shamdasani said the civilian victims included Buddhist Rakhines and Rohingya Muslims as well as other ethnicities.

“The impact of the violence on civilians in northern Rakhine has been exacerbated by the Government’s near-suspension of humanitarian access since January 2019,” she said.

She said sources in the area reported an incident on Wednesday in which two military helicopters flew over south Buthidaung township and fired on civilians tending cows and rice fields, killing at least seven civilians and injuring 18 others.

The area had seen 4,000 Rohingya villagers displaced in the past two weeks, she said. According to Rohingya activists, the casualties were Rohingya.

Shamdasani said her office calls on the Myanmar military and the Arakan Army “to immediately cease hostilities and to ensure that civilians are protected.

Humanitarian access to all areas of northern Rakhine must urgently be restored, including those areas affected by recent clashes.”

“As the international community is taking steps toward accountability for the crimes committed against civilians in previous years, the Myanmar military is again carrying out attacks against its own civilians — attacks which may constitute war crimes,” she said in a statement. “The consequences of impunity will continue to be deadly.” /gsg