Abducted trader, family about to leave PH due to threats to life, wife says

MANILA, Philippines – The businessman, who was recently abducted in Laguna, and his family was set to leave the country because of the threats to his life, his wife revealed on Friday.

His wife, Noreen, said the family was set to fly out of the country on April 7, had Fajardo not been abducted. 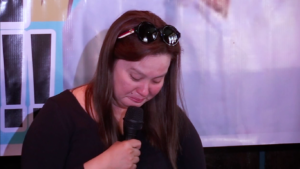 Noreen Fajardo says her family was set to fly out of the country on April 7 had her husband not been abducted. Photo by RYAN LEAGOGO/INQUIRER.net

She said the meeting Fajardo attended in Sta. Rosa, Laguna, was his last itinerary before leaving the country.

However, she said she didn’t know why Fajardo chose to have the meeting in Laguna because it was one of the areas that he should avoid.

Fajardo’s lawyer, Ferdinand Topacio, said that Fajardo should have avoided areas in Calabarzon because he has enemies who are police officers there.

Noreen Fajardo noted that her husband has been receiving many threats to his life which prompted them to decide to leave the country.

Fajardo used to lead the MACG in Tanauan City which arrested and paraded petty criminals in the city for the mayor’s “shame campaign.”

He was also linked to the illegal drug trade, which put him in the “drug matrix” of the police in Calabarzon. He was also tied to contract to kill activities.

However, Topacio said police officials only made up the drug matrix to implicate Fajardo.