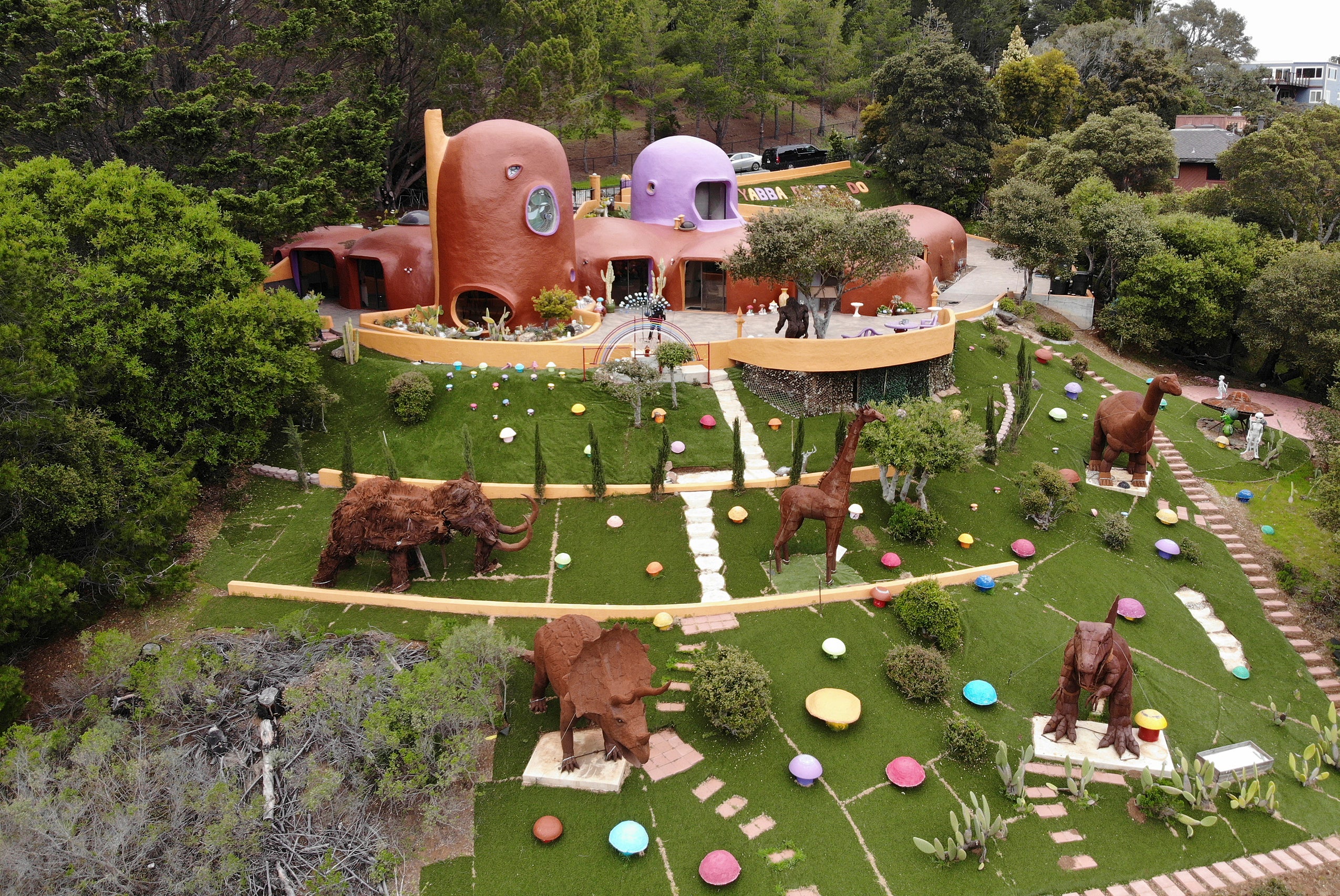 This Monday, April 1, 2019 photo, shows an aerial view of the Flintstone House in Hillsborough, Calif. The San Francisco Bay Area suburb of Hillsborough is suing the owner of the house, saying that she installed dangerous steps, dinosaurs and other Flintstone-era figurines without necessary permits. The owner and her attorney say they will fight for the rights of property owners and Fred and Barney fans everywhere. (AP Photo/Terry Chea)

HILLSBOROUGH, California — Towering dinosaurs stand among fanciful mushrooms in the sloping backyard. A life-sized Fred Flintstone welcomes visitors near the front door. And by the driveway on the lawn is a giant “Yabba Dabba Do” sign in orange, purple and red.

The latest battle in the war between government rules and property rights is playing out in a posh San Francisco suburb, where a retired publishing mogul has installed an elaborate homage to “The Flintstones” family. The bold, bulbous house is surrounded by Stone Age sculptures inspired by the 1960s cartoon, along with aliens and other oddities.

The controversy has sparked international media coverage and an online petition signed by thousands to preserve the attention-grabbing property, visible from a nearby highway.

The 2,730-square-foot (832-square-meter) house itself is not at stake, but the town of Hillsborough said Florence Fang’s multimillion-dollar property is a public nuisance and an eyesore. Officials filed a lawsuit in state court last month to make her remove the unpermitted garden installations. Fang does not live in the house but uses it to entertain.

An attorney for the 84-year-old said snobby officials want to squelch Fang’s constitutional right to enjoy her yard, and promises a vigorous fight.

“Mrs. Fang has made people smile, she’s giving them joy. What’s not to love about Dino, who acts like a dog?” said Angela Alioto, a former San Francisco supervisor. “What is wrong with these people?”

The oddly shaped house, currently painted red and purple, was designed by architect William Nicholson and built in 1976. Fang, a prominent philanthropist who once published the San Francisco Examiner, bought the property in June 2017 for $2.8 million.

The whimsical front yard has statues of Barney and Betty Rubble, along with Fred and Wilma. A sign reads “No Dino Allowed” and features a purple cartoon dinosaur. Colorful mushroom sculptures dot the front and back. A steep staircase, deemed unsafe by town officials, leads to a garden of giant metal prehistoric animals.

The case is simple, he said.

“Whether she is building a project with amusing cartoon characters or Rodin statues or anything else, she still has to go through the process like everyone else,” he said.

Government has the right to enforce public safety codes, and to ensure property owners don’t impinge on the rights of other property owners, said Tim Iglesias, a property professor at the University of San Francisco School of Law. Private property has been regulated in the United States since colonial times, he noted.

But Iglesias said it’s unusual for a homeowner to ignore three work-stop orders issued by the city, as the March 13 complaint states Fang did. She also ignored an administrative order to remove the installations by December 5, 2018, although she paid a $200 fine.

“This is a situation where a very wealthy, sophisticated homeowner has basically thumbed her nose at the city consistently,” he said. “If they let her get away, then all the other wealthy people in Hillsborough can say, ‘Hey, I can do whatever I want with my property. Who cares about the planning department?'”

At a media tour of the property this week, Alioto said Fang will respond to the lawsuit with a counter-claim, but she declined to discuss specifics. She said Fang’s constitutional rights to free speech and religion were violated. Fang was not made available for an interview.

“They want everything removed. They want the dinosaurs removed,” Alioto said. “They wanted her to put a tree in front of the dinosaur, so you couldn’t see the dinosaur.”

David Levine, who specializes in civil litigation and remedies at the University of California Hastings College of the Law, said property owners flout permit regulations all the time. Usually, they pay a fine and correct any safety issues.

And as for which party might prevail in court?

“You have to figure out: Who’s the twit? They’re going to rule against the one that’s being a twit,” he said. “Is the twit the homeowner that ignored all the orders or the twits saying, ‘We don’t like Wilma and Betty?’.” /kga