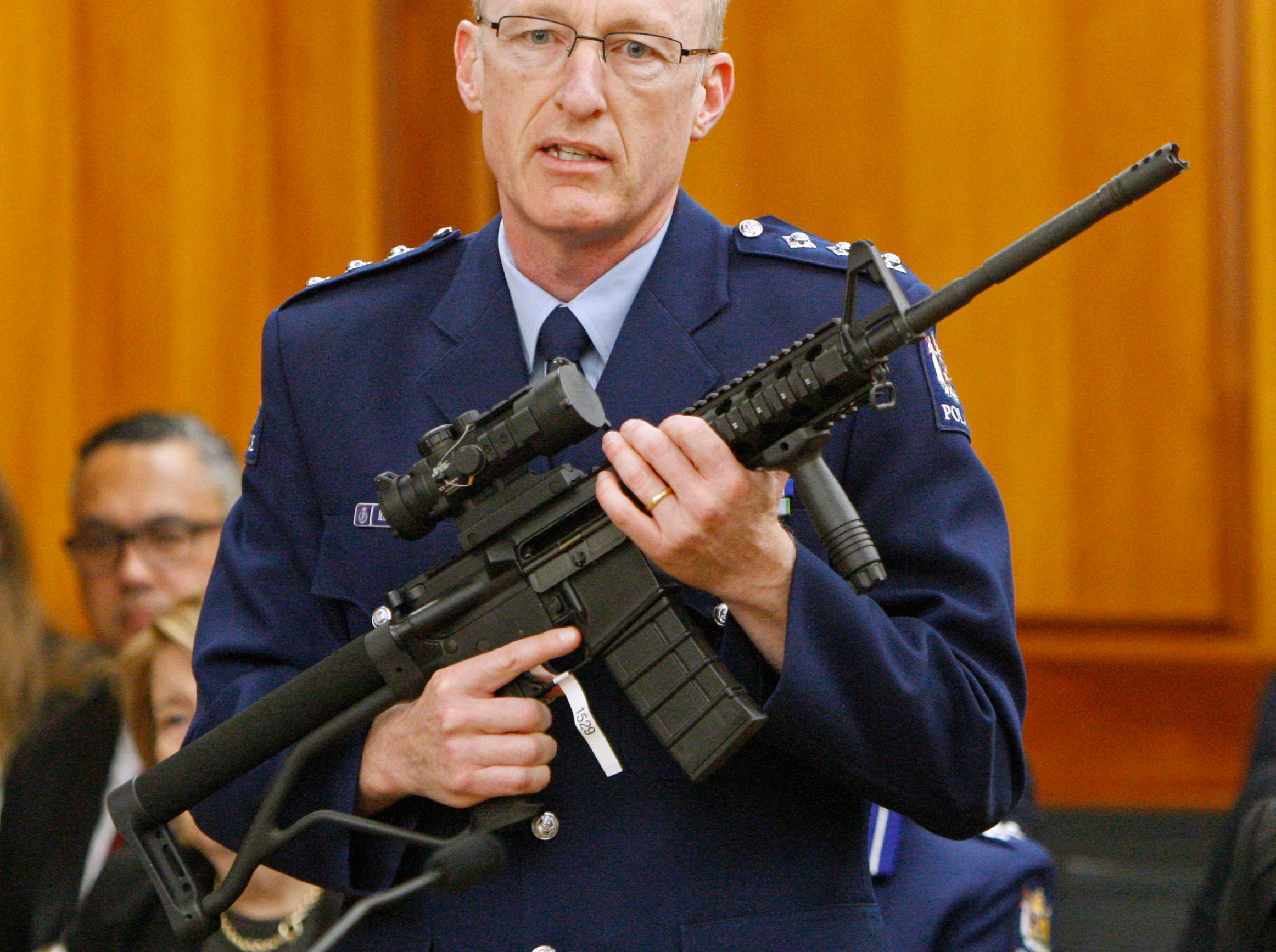 Police acting superintendent Mike McIlraith shows New Zealand lawmakers in Wellington, an AR-15 style rifle similar to one of the weapons a gunman used to slaughter 50 people at two mosques, Tuesday, April 2, 2019. New Zealand lawmakers on Tuesday voted overwhelmingly in favor of new gun control measures during the first stage of a bill they hope to rush into law by the end of next week.(AP Photo/Nick Perry)

Australian Brenton Tarrant was previously charged with one murder as a holding measure, but police said Thursday that all the deaths and injuries in the March 15 attacks will be reflected in upgraded charges during his next appearance.

“The man arrested in relation to the Christchurch terror attacks will face 50 murder and 39 attempted murder charges when he appears in the High Court in Christchurch on Friday,” they said in a brief statement.

Tarrant, 28, will appear via video link in the Christchurch court from a maximum-security prison in Auckland.

A note from the court this week said the appearance was likely to be brief and would “ascertain the defendant’s position regarding legal representation” and other procedural matters.

Tarrant sacked a court-appointed lawyer after his first court appearance on March 16, raising fears he wanted to represent himself and attempt to use any trial as a propaganda platform.

The court said Tarrant would not be required to enter a plea during Friday’s hearing.

The court has now barred media from filming or photographing the accused.

Police said further charges were being considered against Tarrant — a self-avowed white supremacist — but did not specify what they were.

They may relate to whether the court deems the attack a terrorist act, something Prime Minister Jacinda Ardern has repeatedly labelled the atrocity.

However, New Zealand’s Terrorism Suppression Act, introduced after the 9/11 attacks, is little used and could complicate the prosecution.

Criminal charges, such as murder and attempted murder are easier to pursue, although prosecutors may want the accused tried as a terrorist to make the point that right-wing extremism is just as dangerous as its Islamic counterpart.

New Zealand’s Corrections Department revealed last month that Tarrant was segregated from other prisoners and able to be observed constantly, either directly by staff via CCTV camera.

It said he had no access to television, radio or newspapers and no visitors.

Local media have reported that if convicted, he will likely face long-term isolation to prevent him being targeted by the largely Polynesian prison population over his white supremacist views.

New Zealand is in the process of tightening its gun laws after the attack and the government has also said it will review laws dealing with hate speech.

Ardern has called for action by social media giants after the alleged gunman livestreamed the attacks online.

The latest update from health authorities earlier this week said 24 people remained in hospital after the attacks, four of them critical, including a four-year-old girl. /muf

Read Next
Drilon: Duterte has ‘no choice’ but to veto P75-B unconstitutional funds
EDITORS' PICK
Smart celebrates all kinds of ‘#SimplyLove’ for Pride Month
‘Work from beach’ suits Pinoy digital nomads
SANTIS Delicatessen: The road to survival is sweet and savory
SWS: Over 12M Filipinos still jobless as of May 2021
Smart brings KCON:TACT especially 4U to subscribers from June 19 to 27
Another Filipino falls victim to hate attack in California
MOST READ
Gordon eyes VP running mate for 2022 polls
Landmark tale of corruption
William Martinez sometimes feels his kids ‘don’t remember’ him anymore
Gilas Pilipinas routs Indonesia anew, stays unbeaten in Fiba Asia Cup qualifiers
Don't miss out on the latest news and information.