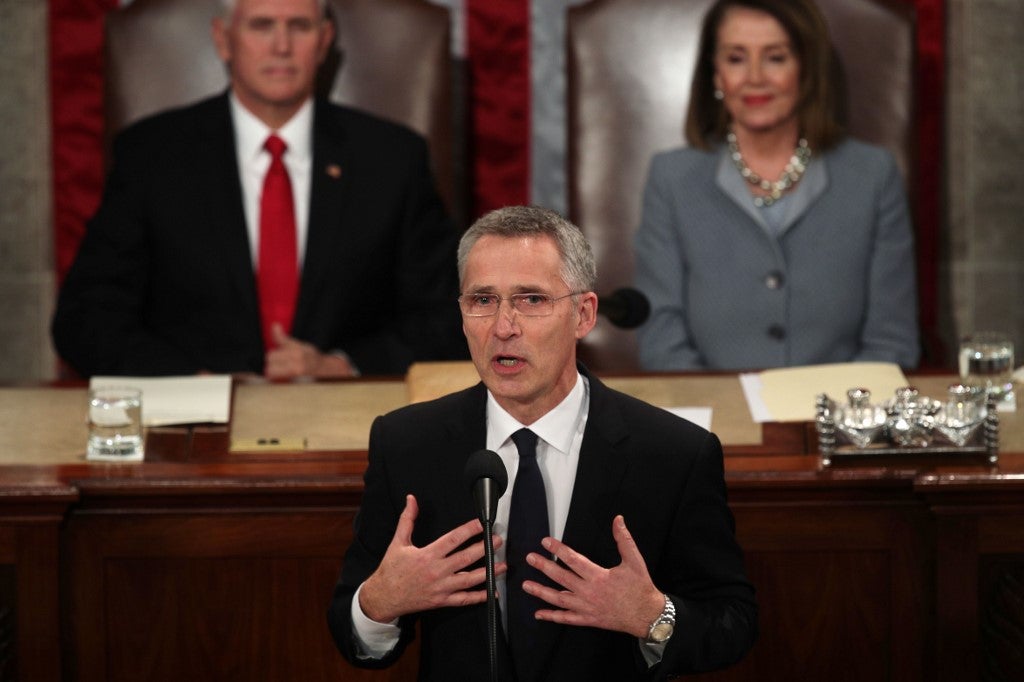 WASHINGTON, United States – Tensions soared Wednesday between the United States and two of its NATO partners, Germany and Turkey, as the alliance opened a 70th birthday celebration aimed at showing a united front against a resurgent Russia.

Hours before foreign ministers from the 29-member Western alliance opened talks in Washington, Vice President Mike Pence delivered a stinging rebuke both to Germany over its level of defense spending and to Turkey for buying a major arms system from Russia.

“Germany must do more. And we cannot ensure the defense of the West if our allies grow dependent on Russia,” Pence told a think-tank forum on the NATO anniversary, held incongruously in a hip new music venue.

“It is simply unacceptable for Europe’s largest economy to continue to ignore the threat of Russian aggression and neglect its own self-defense and our common defense,” Pence said.

President Donald Trump has repeatedly voiced annoyance that few allies in the North Atlantic Treaty Organization are meeting a goal set by the alliance in 2014 to devote two percent of GDP to defense.

Germany last month announced that defense spending would slip to 1.25 percent in 2023.

Hungry for energy, Germany has also forged ahead with Nord Stream 2, a gas pipeline with Russia that will double capacity.

“If Germany persists in building the Nord Stream 2 pipeline, as President Trump said, it could turn Germany’s economy into literally a captive of Russia,” Pence said.

Pence, however, promised that the United States “is now and will always be Europe’s greatest ally” — a tonal shift from Trump, who has loudly wondered whether it is worth defending smaller NATO members such as Montenegro.

German Foreign Minister Heiko Maas, speaking afterward, said that burden-sharing was about more than expenditure and that NATO was foremost “an alliance of values.”

Noting that Germany’s history made military spending controversial, Maas pointed out that Berlin is the second largest troop contributor to Afghanistan and is constructing a new NATO command center in the city of Ulm.

“We in Europe know that we cannot take our security for granted. We have to shoulder responsibility in order to continue safeguarding it, in our own interest,” he said.

Western powers have also increasingly clashed with Turkish President Recep Tayyip Erdogan’s Islamist-rooted government, which has cracked down on dissent at home and threatened to strike US-backed Kurdish fighters in Syria.

On Monday, the United States said it was suspending Turkey’s participation in the F-35 fighter-jet program due to Ankara’s plans to buy Russia’s S-400 missile defense system, raising fears that Moscow could gain data to hone its hardware and shoot down Western aircraft.

“Turkey must choose — does it want to remain a critical partner of the most successful military alliance in the history of the world, or does it want to risk the security of that partnership by making reckless decisions that undermine our alliance?” Pence said.

But Turkish Foreign Minister Mevlut Cavusoglu ruled out a change of heart, saying: “The S-400 deal is a done deal and we will not step back from this.”

“We have been working with Russia,” he said. “But it doesn’t mean that we are undermining the alliance and we agree with Russia on everything. There is no shift on our foreign policy.”

The 70th anniversary comes amid rising concern over Russia, which has supported separatists in Ukraine and Georgia, sought to sway the 2016 US election and was accused in a poisoning attack in England.

NATO Secretary General Jens Stoltenberg, in an address to the US Congress, said the alliance wanted better relations with Russia — but needed to prepare a strong defense.

Stoltenberg appeared to soothe Trump during a White House meeting on Tuesday, crediting the US leader’s tough rhetoric with pushing the Europeans and Canada to bolster their defense budgets by $100 billion between 2016 and 2020.

Lawmakers repeatedly rose to standing ovations as Stoltenberg hailed the value of the alliance.

“The strength of a nation is not only measured by its economy or the number of its soldiers, but also by the number of its friends. And through NATO, the United States has more friends and allies than any other power.” /cbb