MANILA, Philippines — Sen. Leila De Lima on Wednesday said leaking the sex video of musician Jim Paredes was only a diversionary tactic to distract the public from pressing issues plaguing the country.

“It should be clear to everyone that it’s but another mean tactic to stifle dissent and divert our attention from grave national issues and controversies incessantly hounding the Duterte regime,” De Lima said in a handwritten statement, a photo of which was posted on her Facebook timeline.

“Do not be fooled by their diversionary scheme,” the senator, who is detained on drug charges in Camp Crame, added in Filipino.“Let’s just focus on more important issues, such as President Rodrigo Duterte’s possible involvement in illegal drug activities.”

The sex video was leaked on social media a few days earlier.

While initially denying its legitimacy, the musician admitted on Monday that it was him in the video.

The musician said that the video was “private” and “not meant for public consumption.” 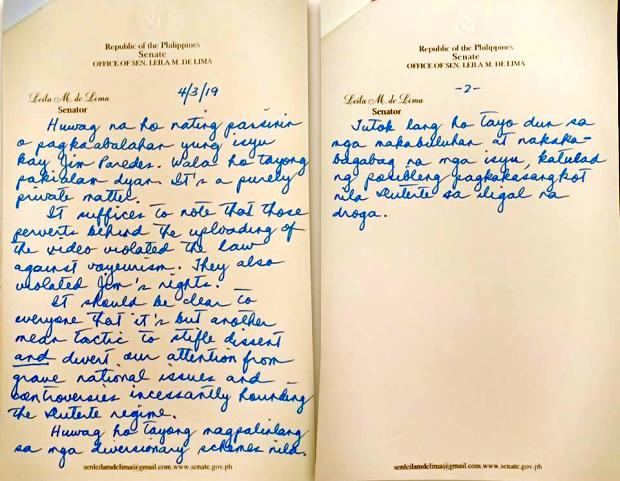 Sen. Leila de Lima issued this note about the Jim Paredes video on Wednesday, April 3, 2019. (Photo from her Facebook account)

“It suffices to note that those perverts behind the uploading of the video violated the law against voyeurism. They also violated Jim’s rights,” De Lima said.

The Department of Information and Communications Technology (DICT) on Wednesday also warned that those who would share the video would be held liable under the Cybercrime Prevention Act. /atm