In Israel election, Palestinians are nowhere to be found 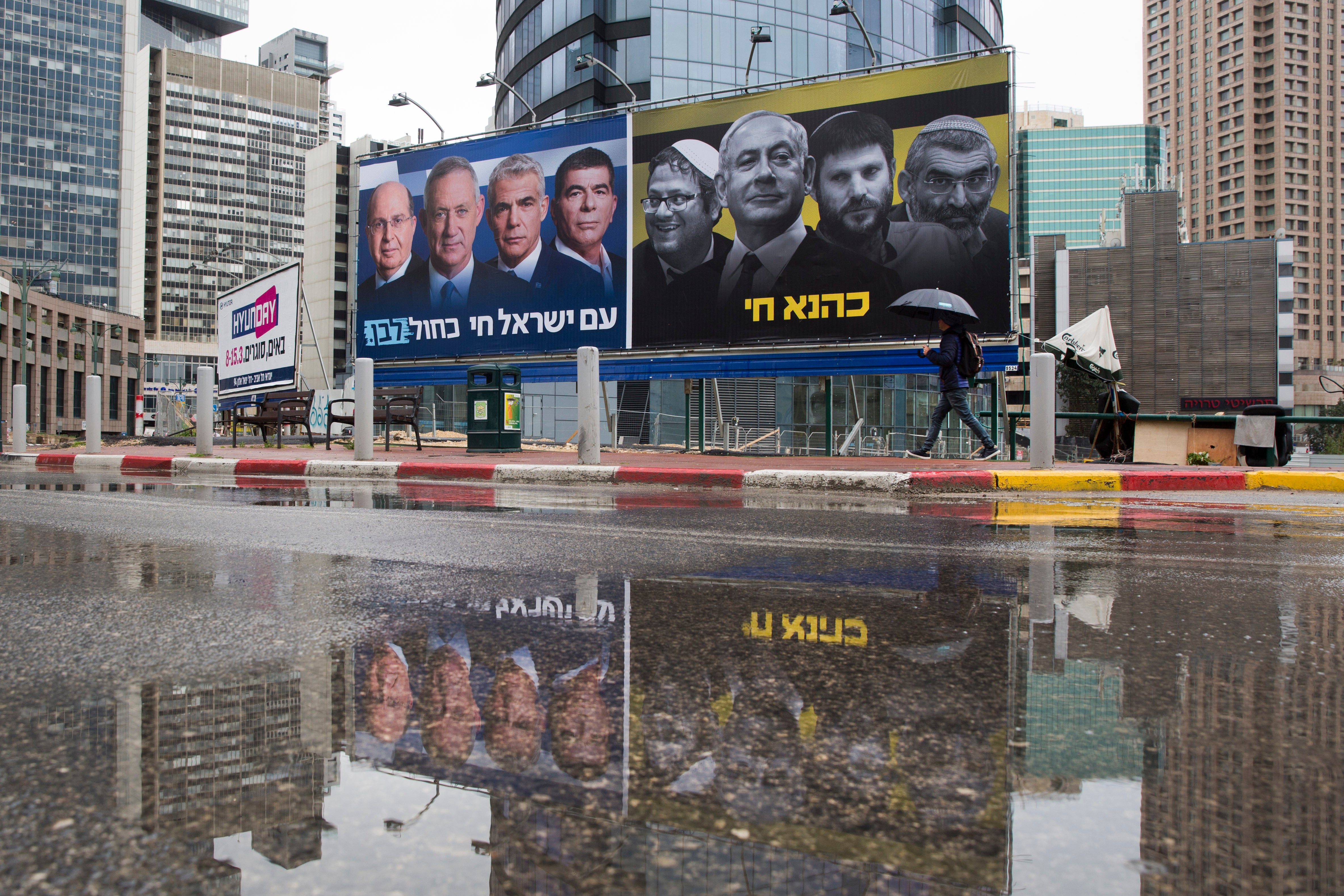 FILE – In this Saturday, March 16, 2019 file photo, an Ultra-Orthodox Jewish man looks at an elections billboards of the Blue and White party leaders, from left to right, Moshe Yaalon, Benny Gantz, Yair Lapid and Gabi Ashkenazi, alongside a panel on the right showing Prime Minister Benjamin Netanyahu flanked by extreme right politicians, from the left, Itamar Ben Gvir, Bezalel Smotrich and Michael Ben Ari in Ramat Gan, Israel, In a charged campaign that has been heavy on insults and short on substance, Israel’s conflict with the Palestinians has been notably absent from the discourse. Hebrew reads on the left billboard “The nation of Israel lives” and on the right billboard “Kahana Lives” in a reference to a banned ultranationalist party. (AP Photo/Oded Balilty, File)

JERUSALEM — In a charged election campaign that has been heavy on insults and short on substance, Israel’s conflict with the Palestinians has been notably absent from the discourse.

Prime Minister Benjamin Netanyahu’s ruling Likud Party has offered no plan for what many believe is the country’s most existential problem. His main challenger speaks vaguely of “separation,” while Netanyahu’s hard-line partners speak openly of the once unthinkable idea of annexing all or parts of the West Bank. Talk of a Palestinian state, the international community’s preferred solution for the past two decades, is non-existent.

It is a far cry from past elections, when peace with the Palestinians was the central issue for voters. This apparent lack of interest reflects widespread disillusionment in Israel over years of failed peace efforts.

But it also is a testament to Netanyahu’s success in sidelining the issue. Capitalizing on internal Palestinian divisions and promoting sometimes contradictory policies, Netanyahu has succeeded in managing the conflict without addressing the bigger issue of how two intertwined peoples will live together in the future. Strong backing from the Trump administration has given him an extra boost.

“The peace track is currently in a coma,” said Shmuel Rosner, a senior fellow at the Jewish People Policy Institute. “There’s not much hope for a viable solution to be revived in the near future, so people can just keep pushing it aside until someday it comes back to haunt them.”

Netanyahu took office in early 2009 and under heavy pressure from then-President Barack Obama reluctantly stated his support for an independent Palestinian state, albeit with many conditions, which were rejected.

Throughout his tenure, Netanyahu has repeatedly cast blame on the Palestinians, accusing President Mahmoud Abbas, who seeks a negotiated settlement with Israel, of incitement and promoting “terror.” At the same time, he has maintained behind-the-scenes security cooperation with Abbas’ forces in the West Bank in a joint struggle against the Hamas militant group.

In the Hamas-controlled Gaza Strip, Netanyahu has engaged in frequent rounds of fighting, but is also conducting behind-the-scenes negotiations with his bitter enemy in hopes of maintaining calm.

The Trump administration has further sidelined the Palestinians by cutting hundreds of millions of dollars in aid and recognizing Jerusalem as Israel’s capital, prompting the Palestinians to sever ties with the U.S. A long-promised peace plan, which the White House says will be released after the election, faces dim prospects, if it is even released.

With the peace process in a deep freeze, it is perhaps no surprise that none of the major Israeli parties are talking about the Palestinians.

“The Palestinian cause is totally absent in the Israeli elections, and when it comes, it comes only in a negative context,” said Ahmed Majdalani, a senior Palestinian official. “This is worrisome, because it tells us that we are going from bad to worse.”

The Palestinians seek the West Bank, east Jerusalem and Gaza Strip — areas captured by Israel in the 1967 Mideast war — for an independent state. The so-called two-state solution is widely backed internationally as the best way to end the conflict.

If Israel continues to rule over millions of Palestinians, the thinking goes, the Palestinians will eventually abandon their dream of statehood and instead demand Israeli citizenship and full equality. In such a scenario, Israel would no longer be able to be both Jewish and democratic.

Israelis accuse the Palestinians of rejecting generous peace offers, most recently in late 2008, a narrative the Palestinians reject. The Israelis also point to the 2005 withdrawal from Gaza, which cleared the way for Hamas to seize power from Abbas’ forces two years later.

Ahead of the election, several religious and nationalist parties, along with individual members of Netanyahu’s Likud party, have openly called for annexing parts or all of the West Bank. These plans include a range of proposals for the Palestinians, including nonvoting residency rights, possible citizenship or financial incentives to emigrate.

It remains unclear how hard these parties, all potential coalition partners for Netanyahu, will push, though Trump’s recent recognition of Israel’s annexation of the occupied Golan Heights has led to stepped-up calls for annexing West Bank territory.

Likud spokesman Eli Hazan said he does not expect annexation to be on the agenda. He said the party “strongly believes” in the status quo. “We are against the one-state solution and two-state solution. Both ways may lead to the end of Israel as a Jewish and democratic country,” he said.

Yohanan Plesner, president of the Israeli Democracy Institute and a former lawmaker, said he did not think Netanyahu would give in to the annexation calls. “At the end of the day, West Bank annexation is the prerogative of the prime minister,” he said.

His Blue and White party’s platform devotes just a few sentences to the Palestinians, promising “an open horizon for political settlement” and pledging to work with Arab neighbors to find a way to “deepen the separation.” It makes no mention of Palestinian statehood, and says Israel will continue to maintain control of parts of the West Bank and never divide Jerusalem.

Ghassan Khatib, a former Palestinian negotiator, said the lack of interest on the Israeli side is harmful to the Palestinians in the short term but much worse for Israel in the long term.

“It means the end of the two-state solution,” he said. “The alternative will be an apartheid system, and this will cause huge damage to Israeli democracy and the image of Israel.”

Yossi Beilin, one of the chief architects of Israel’s historic 1993 interim peace agreement with the Palestinians, said Netanyahu’s policies have been “devastating” for peace prospects. Yet he remains confident the two-state solution will one day be adopted due to a lack of alternatives, and even believes that Gantz “for sure” will pursue a peace deal if elected.

Ironically, Trump’s peace plan, if released, may force Netanyahu’s hand, Beilin said. If elected, Netanyahu will have a hard time resisting his close friend’s proposal while his hard-line coalition partners oppose any concessions to the Palestinians.

“The impact of the plan might be very interesting,” Beilin said.  /muf