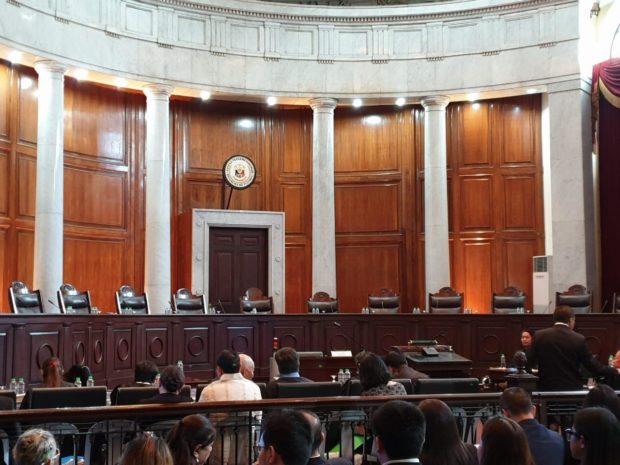 MANILA, Philippines – The Supreme Court has ordered the Office of the Solicitor General (OSG) to release all ‘Oplan Tokhang’ police reports to human rights groups and victims that questioned the legality of the government’s war on drugs.

Petitioners that will be given copies are the Center for International Law (CenterLaw) on behalf of residents of 26 barangays in San Andres Bukid in Manila and the Free Legal Assistance Group (FLAG).

Last February, the CenterLaw prodded the High Court to order the OSG, through Solicitor General Jose Calida to provide them copies of documents related to the government’s crackdown on illegal drugs.

CenterLaw filed a petition in 2017 with the High Court seeking the issuance of a writ of amparo to protect the residents of 26 barangays in San Andres Bukid, Manila against the government’s anti-illegal drug war.

The Free Legal Assistance Group (FLAG) also filed a petition with the high court then, asking the magistrates to declare as unconstitutional the Philippine National Police’ “Oplan Double Barrel,” which it said allows the police to “neutralize” suspected drug pushers instead of arresting and prosecuting them.

A three day oral argument was conducted and eventually ordered Calida to submit within 60 days the following:

-Names, addresses, gender of those killed

-Whether search warrants or warrants of arrests were issued

-Names of representatives of media, NGOs and barangay officials present during the police operations

On  “death under investigation” cases,  the High Court asked the submission of the following:

-Date, time and place of the killing

-Charges have been filed against the suspects if there are any

The High Court also asked  government lawyers to submit the records of all buy-bust operations conducted in San Andres Bukid, the subject of one of the two petitions, the pre-operations plan and post-operations plan.

Calida maintained that the documents are confidential and that they only agreed to provide the High Court with a copy on the condition that it will not be given to the other parties. / gsg