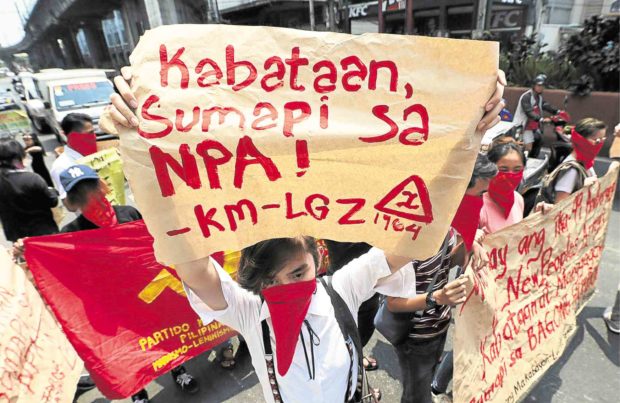 He said parents and school officials should be mindful of extracurricular activities, including social immersion programs, teach-ins, symposia, and social field works in rebel-infested areas, that are not approved by school authorities.

“The communist terrorist movement, through its front organizations, exploits such activities to recruit fighters from among the ranks of unsuspecting students,” Albayalde said in a press briefing at Camp Crame.

According to Albayalde, some members of militant youth groups are also known to participate in “indoctrination” and “social immersion courses” in training camps during summer break without permission from their parents.

He specifically cited the arrest of Aljon Tamuyang Cardenas, an 18-year-old student of the state-run University of Eastern Philippines in Calbayog City, during the attack of NPA rebels at the Victoria Municipal Police Station in Northern Samar on March 28. Three rebels were killed in the encounter.

“Cardenas is not the first, and hopefully he would be the last student to fall for the grand communist deception who allowed himself to be used as cannon fodder in this 50-year protracted war of the CPP [Communist Party of the Philippines]-NPA that is going nowhere,” Albayalde said.

The PNP recognizes that academic freedom is important to promote critical thinking in the educational system, Albayalde said.

“We have no problem with student radicalism, but the moment militant students take up arms to topple the government, they become enemies of the state and subject to appropriate law enforcement response,” he said.

“God forbid, but we do not want these unwary students to be along the line of fire when our maneuver forces launch a summer offensive in the CPP-NPA heartland in the coming weeks,” he added. /atm

UP, PUP students being forced to join NPA, says ex-rebels