Moving up: ‘Lumad’ students on a long march from strife 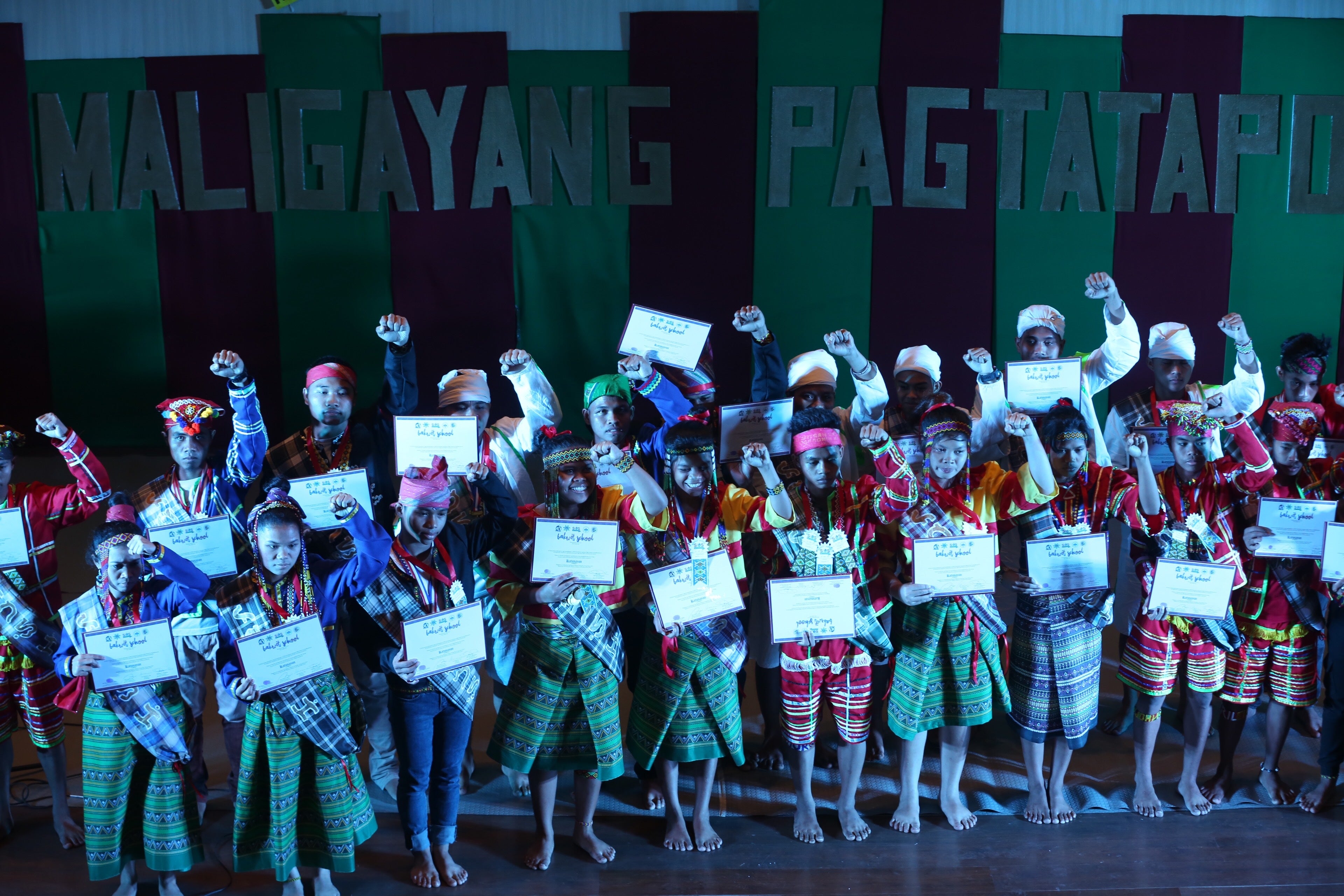 IN A FIGHTING MOOD “Lumad” students from the “bakwit” school at the University of the Philippines in Diliman, Quezon City, celebrate their moving up ceremony with clenched fists and a vow to use their learning to defend their ancestral lands. The young lumad had to flee their communities in Mindanao after President Duterte threatened to bomb their schools “for teaching students to rebel against the government.” —NIÑO JESUS ORBETA

MANILA, Philippines — The road to the University of the Philippines Integrated School (UPIS) auditorium could be the longest march yet for 70 “lumad” students, whose moving up ceremonies on Friday also became a rallying call to end martial law in Mindanao.

“Even though we had to wade through the wilderness to get here, this serves as a challenge for us to continue our struggle for true freedom anchored on social justice,” Grade 10 student Catherine Dalon (“Katkat”) told an audience of lumad elders and leaders, university students, activists, priests and educators.

KatKat, from Mindanao Interfaith Services Foundation Inc. in Davao City, joined other colorfully garbed lumad students in recalling their bittersweet journey from their communities in Mindanao in July to escape the military’s threats to bomb their schools.

The group eventually found sanctuary at the University of the Philippines (UP) in Diliman, Quezon City, after eight months of being shuttled from various universities and shelters in Metro Manila. While battling homesickness in the country’s capital, their families remained in Mindanao, caught in the crossfire between government and rebel forces.

Their last stop was the UP College of Home Economics, where 50 volunteer teachers taught the lumad students from Grades 3 to 11 subjects from the curriculum prescribed by the Department of Education (DepEd).

Katkat recalled how the so-called “bakwit” school (school for evacuees) helped her discover that academic endeavors can coexist with awareness on social issues. One of her most cherished memories was seeing constellations and an enlarged image of the moon for the first time through a telescope at the UP Observatory.

“Our studies will have meaning only when they help us forge a free society,” she said.

Though she shares the longing of fellow lumad students for their families and friends left in Mindanao, she is determined to realize her dream of defending their rights and their ancestral lands.

“I told my parents: Our dreams are stronger than our longing for home,” she said.

Lumad teacher Mimi Alegre, 21, sees the moving up event as more than just a benchmark of successfully finishing an academic year.

“This day allowed us to show to the world that we value education despite the many challenges confronting our communities,” she said.

Alegre said she saw a lot of her younger self in her students when she recalled how she almost decided to become a house help because of poverty, until she found a new purpose in their town’s lumad school.

According to Save our Schools (SOS) Network, at least 73 of 228 lumad schools in Mindanao have closed since the start of the Duterte administration in 2016.

In July 2017, the President accused lumad schools of “teaching children to rebel against the government” and threatened to bomb them using the Armed Forces of the Philippines and the Philippine Air Force.

Alegre fears that with martial law extended in Mindanao, more schools and lumad leaders will come under threat.

UP Diliman chancellor Michael Tan, meanwhile, assured the lumad that the university would continue to offer them shelter as well as a safe educational and cultural space.

At the moving up ceremonies, Tan signed a memorandum of understanding between UP and 32 lumad schools, which acknowledges the state university’s responsibility to provide teaching assistance and protection to national minorities whom he described as the “Iskolar of the Iskolar ng Bayan.”

“I hope the day would come when [the] lumad do not have to stay in a bakwit school, and celebrations like this would be held in their own communities in Mindanao,” said the chancellor, adding that UP has been linking up with the DepEd and other concerned groups to lobby for the lumad’s right to education and recognition for their schools.

Tan also appealed to the police and the military to stop their armed attacks that have closed down lumad schools.

As the lumad youth fervently sang the song of the “children of Mindanao,” the walls of the UPIS auditorium echoed with their cry for justice, education and peace, an end to martial law, and respect for human rights in their communities thousands of kilometers away.

The cry couldn’t have been more timely.

Reports indicated that Cafgu member Eroy Balentin, who was drunk at the time, indiscriminately fired at the houses in the community, hitting Pangadas, who was then watching television in one of the houses, in the head.

Another report said that Balentin had an altercation with one of the residents in the barangay after the latter refused to join the paramilitary group.