Del Rosario, others get Commission on Appointments nod 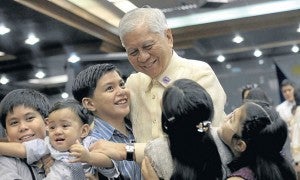 MANILA, Philippines—The Congressional Commission on Appointments on Tuesday gave its nod to Foreign Secretary Albert del Rosario after throwing out the “improper opposition” of a Chinese businessman.

Businessman Chung Hing Wong, aka Joseph Wong, appeared as an oppositor to Del Rosario’s appointment, but was thrown out by the CA committee on foreign affairs on a motion from chair Sen. Miriam Defensor-Santiago.

Santiago was annoyed that Wong raised a syndicated estafa case he filed against Del Rosario which is pending in the Department of Justice.

“It’s not a function of the committee to litigate a case. Plus this committee is not clear at all what disqualification is involved in this complaint pending in the DoJ,” she said.

Since Del Rosario is presumed innocent and the DoJ has not ruled on the matter, Santiago dismissed Wong’s complaint.

“Don’t do that again. That is contemptuous. You’re insulting us here. You come here and you can’t explain what his fault is. We’re all in suits and ready to work. Please get this oppositor out of the premises,” she said.

In his affidavit, Wong of Unisteel/Unesco Metals Inc. alleged that the officers and directors of Private Development Corp. of the Philippines Bank had deceived him into taking out a loan from the bank through misrepresentation and with the sinister purpose of taking over his corporation.

Del Rosario was a director of PDCP Bank.

Except for Mariño, all are career ambassadors.