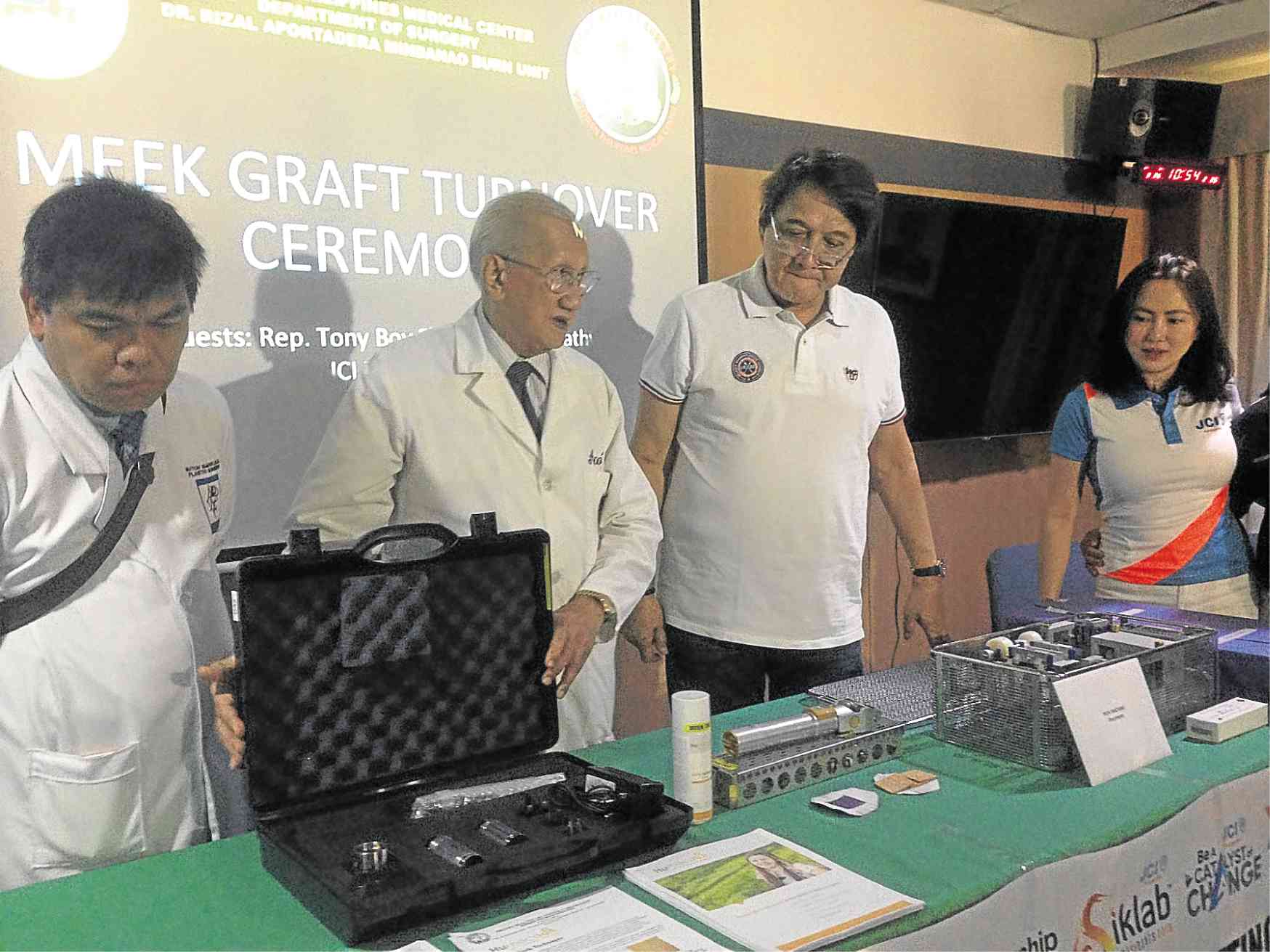 DAVAO CITY — Melissa Ceniza, mother of 5-year-old Nemlord Niel, was profuse in thanking hospital staff and officials as her son became the first beneficiary of skin micrografting at the burn unit of Southern Philippines Medical Center (SPMC), one of the country’s biggest in terms of number of patients.

Treatment by the modern machine was made possible for Nemlord Niel, who hails from Compostela Valley, through the P2.9-million Humeca Meek micrografting equipment that was donated on Tuesday to the hospital’s burn unit.

SPMC was the first hospital in the country to get the machine.

Humeca Meek helps in the process of expanding unburnt skin up to nine times its size so this could be used to cover burnt portions of a victim’s body to speed up healing, according to Dr. Rizal Aportadera, director emeritus of SPMC Burn Unit.

The life-saving equipment was donated by Davao del Norte Rep. Antonio Floirendo Jr. to the hospital for patients with severe burns, like Nemlord Niel, who needed a skin grafting operation.

Melissa said she was preparing a meal on that day when the kerosene lamp she had left on the table suddenly tipped over.

Flames burst. The next thing she saw was her son, who had been sitting near the table, already on fire.

Floirendo, a burn victim himself when he was 5 years old, said in his visits to many places in the country, “I have noticed so many burnt houses.”

“There are people who were in a hurry to cook and make a little money but they don’t know that getting burned is very painful,” the lawmaker said.

“I have been through a lot of operations in my days,” he said. “Maybe my favorite place in a hospital is the operating room,” he added in jest.

Floirendo recounted the pain of suffering from burns.

“It really hurts like you were stripped of skin, then burned, then alcohol was poured on it,” he said.

“And you feel it all the time.”

Since Davao City was the regional center, Floirendo said he decided that it would be an ideal place to donate the burn equipment.

“I want everyone in the whole of Mindanao to benefit from this,” he said.

Aportadera said more than half of them were children.

Many adult victims, he said, were “breadwinners of the family or workers” who could barely afford treatment and “rely on assistance provided by well meaning donors.”

“This day, Davao is rejoicing,” Aportadera said. “We have been praying for this kind of equipment for months, years,” he added.

“Every day, I look at the burn victims exposed with no skin,” Aportadera said.

“This is heaven-sent,” he said. “Today I’m happy,” Aportadera added.

Floirendo said his donation was also meant to make people aware that “burn is really something painful because you’re awake and you feel it.” —JOSELLE R. BADILLA