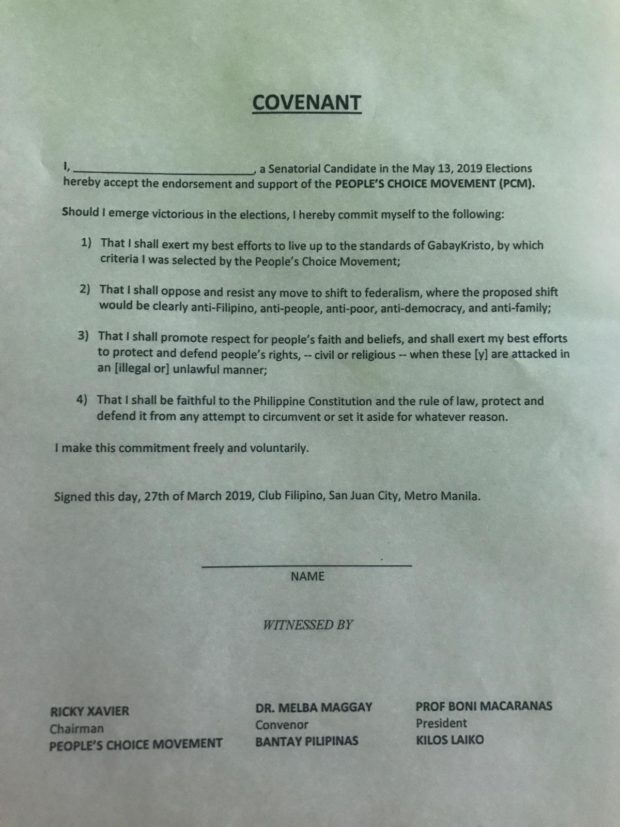 The covenant signed by senatorial candidates endorsed by PCM

MANILA, Philippines — The People’s Choice Movement (PCM) officially presented Wednesday its 10 endorsed senatorial candidates which the group of lay leaders said “our country and people need during these times.”

Eight of the senatorial contenders endorsed by the group came from the Otso Diretso opposition coalition, one from the Makabayan coalition, and one independent aspirant.

The PCM is a group of individual leaders coming mostly from different faith-based organizations from the Catholic, evangelical and protestant communities in the country.

During the event in Greenhills, San Juan City, Bantay Pilipinas convenor Melba Maggay, a member of the PCM, said they chose candidates who “believe in God,” “oppose Charter Change and federalism,” “would fight for Filipino fishermen being harassed in the West Philippine Sea,” and would fight for human rights and justice.”

Ricky Xavier, PCM chair, said their support for the 10 candidates would go beyond their organizations, adding that they vouch for the contenders who have “no record of corruption,” and “do not belong to political dynasties.”

“We will ask our members to go and engage in the parishes. There are many people there who are not part of our organizations but who desire the same things that we do,” Xavier added.

Maggay also stressed that the Catholic, evangelical and Protestant churches were not involved in the project.

“This is a purely lay or citizen initiative by the leaders of various faith-based organizations in the country,” she said.

The PCM said they have screened 62 senatorial candidates and 30 were removed based on two “knock-out issues: candidates must believe in God and must be against Charter change.” Of the remaining, the 10 highest scorers based on their “GabayKristo” guide were declared the selected candidates.

The said guide included four categories: character and honor, competence and abilities, faithfulness to public service, and faithfulness to God, the Constitution and the law.

Joey Carignan, a PCM member and president of the Coalition Against Federalism in the Philippines, said they made the stance of candidates on the revision of the Constitution as a qualifier because “we see it as a real threat to the Filipino people and our democracy.”

“The Senate is our last line of defense against Charter Change and federalism. Thus, we must elect senators who are against them,” he added in a statement. /muf