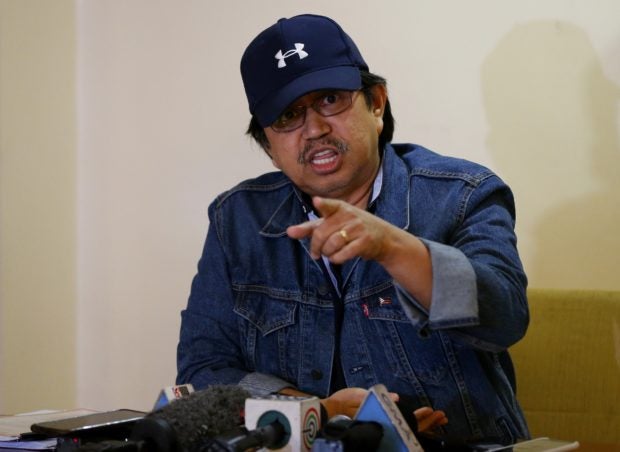 Sen. Panfilo Lacson on Tuesday said authorities should not gloss over the disturbing allegations of dismissed Police Senior Supt. Eduardo Acierto, who claimed he was implicated in the smuggling into the country of “shabu” (crystal meth) worth P11 billion after he told Malacañang that two Chinese nationals often seen with President Rodrigo Duterte were into the illegal drug trade.

Lacson, a former chief of the Philippine National Police, said Acierto had visited him in his office in the Senate and gave him a copy of his confidential report on the alleged drug dealings of Michael Yang, whom the President had already cleared of involvement in the narcotics business, and a certain Allan Lim.

This was before Acierto was alleged to be involved in the smuggling of one ton of shabu through the Port of Manila in July last year, Lacson said.

Narcs later found four magnetic lifters in which the shabu had been concealed at a warehouse in Cavite province.

In an interview with selected reporters on Sunday night, Acierto claimed Yang and Lim, who was previously charged with running a shabu laboratory in Cavite, were behind the manufacturing of illegal drugs in Davao and Cagayan de Oro cities.

“They should pursue the investigation because the one being involved occupies the highest position in the government,” Lacson told reporters, referring to the President.

This would be “just to clear the air if Acierto’s accusations have basis,” he said. “I am not saying that his accusations are credible. I have seen the report even before the Senate hearing (on the shabu smuggling through the Port of Manila).”

Lacson, a seasoned police investigator, said he himself found wanting the evidence that Acierto had against Yang then.

Besides photos showing the President with the alleged drug lords, he said the report did not contain any other evidence supporting Acierto’s claims.

Sen. Richard Gordon, chair of the blue ribbon committee that investigated the shabu smuggling, said he had received a copy of Acierto’s report.

The document, copies of which Acierto said he gave to his superiors in the PNP, Philippine Drug Enforcement Agency chief Aaron Aquino and Executive Secretary Salvador Medialdea, was in the custody of the committee.

Gordon, however, said Acierto himself had told the senators that he had no evidence directly linking the President to the alleged illegal activities of Yang, reportedly an economic adviser to the President.

In a news conference at the PNP headquarters, Albayalde blasted Acierto for implying that he and other high-ranking law enforcement officials failed to act on his report.

“I can only speculate that Acierto could be doing all these indiscriminate allegations in a vain attempt to muddle the ongoing case resulting from his indictment [in the shabu smuggling],” the police chief said.

In his interview with reporters on Sunday, Acierto lamented that nothing happened after he submitted his report to Malacañang and that instead he was implicated in the shabu smuggling.

He said he went into hiding after certain people from the “Davao group” put out a P15-million contract to kill him.

Acierto did not identify the people who wanted him dead but said they could be “police officials” or “politicians.”

In Malacañang, Medialdea said he could not find the report that Acierto claimed he had submitted to him.

“We are still looking for that report and as of now we can’t find any submitted to our office,” Medialdea told Inquirer.net.

He also said Yang was no longer an economic adviser to President Duterte.

“There is an allegation and let the allegation be processed, investigated and then if there is a validation, then the Palace will make a move,” Panelo said.

On Tuesday, he said the President would “kill” Yang if it turned out he was into drug trafficking after all.

“You don’t know this guy [President Duterte]. He will kill him if he is involved in [illegal drugs],” Panelo said.

But the President defended Yang in a speech in Koronadal, Cotabato province, on Tuesday night.

He said Yang had been doing business in Davao City since 1999.

“Michael Yang is always with premier of China,” the President said. “Do not believe Acierto. I want to ask the military and the police, why is that son of a bitch still alive?”

He said Acierto was dismissed from the service on Aug. 14 last year “due to procurement of AK-47 rifles [that] eventually landed in the possession of of the New People’s Army.”

“I know he kidnapped Chinese (nationals) and the Korean who was killed in Camp Crame,” he said, referring to South Korean businessman Jee Ick-joo, who was killed in the camp where the PNP headquarters is located in October 2016.

Earlier on Tuesday, Samira Gutoc, an opposition senatorial candidate in May’s midterm elections, said in a statement that Malacañang needed to explain why it ignored Acierto’s report.

“There is an appearance of impropriety so it should have been explained. The public deserves an answer,” Gutoc said.

“This is a challenge to the Ombudsman because there are government officials involved … Do your homework, these people are not immune from suit. You can investigate them and file appropriate charges if warranted,” Tañada said.

“I call on relevant local authorities and international institutions to look into this matter. This issue should not be dismissed by just attacking the credibility of the messenger,” Alejano said in a statement. —With reports from DJ Yap, Christine O. Avendaño, Nestor Corrales, Jaymee T. Gamil and Melvin Gascon