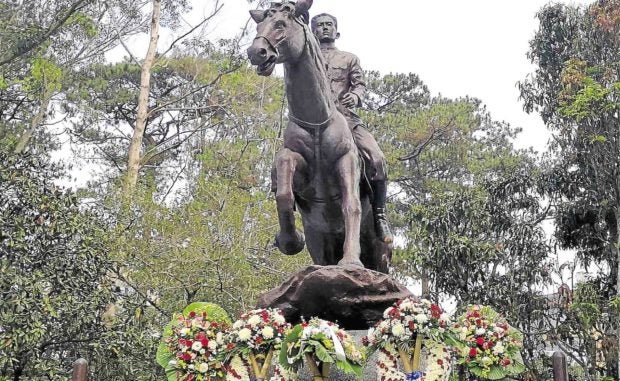 BAGUIO CITY — Letters kept by the family of the country’s first president, Gen. Emilio Aguinaldo, revealed that he quietly endured the scorn and malice while he lived, after establishing the Philippine Republic while fighting two superpowers toward the end of the 19th century.

Aguinaldo, who declared Philippine independence from Spain in 1898 and who was appointed president when the revolutionaries formed the first democratic republic in Asia, “is often ridiculed and the subject of unfounded and unwarranted — even hateful — comments over the past decades,” said Emilio Aguinaldo Suntay III during the celebration of the hero’s 150th birth anniversary here on Friday.

Suntay, the general’s great-grandson, said many of what Filipinos knew today about Aguinaldo were fueled by propagandists during the Philippine-American War, including accounts about the execution of Katipunan founder Andres Bonifacio.

“The letters, which we will bring out soon, state that [Aguinaldo] did not want to confront the propagandists, concluding that ‘what will sully one’s reputation, will smear everyone else’s reputations,’” said Suntay, who is the custodian of what is considered as the country’s first flag at Aguinaldo Museum here.

Suntay said the late dictator Ferdinand Marcos had described Aguinaldo as “a man who suffered in quiet dignity knowing he triumphed with his blood, sweat and tears to shape a nation.”

According to Suntay, many people believe Aguinaldo’s legacy was diminished because he did not die a martyr during the revolution. “And living [after the revolution] was more difficult — to suffer all the intrigues and to see your sons and daughters struggle while forming a new republic,” Suntay said.

He said his great-grandfather “continues to be reviled when this generation of Filipinos should appreciate and agree we have a glorious past.”

“We believe our own oppressors who started the line of thinking that Aguinaldo was a murderer, [and was mainly responsible for the deaths of] Bonifacio and Antonio Luna,” he said.

He added: “Aguinaldo was labeled a savage, a barbarian, and later on, a bandit by the administration of US President William McKinley. But never a revolutionary. The revolution was never recognized because it painted the Americans as colonialists.”

For Spain and the Catholic Church, Aguinaldo was “an atheist, a blasphemer, who was excommunicated,” Suntay said, although the general returned to Catholicism before he died in 1964.

But like some revolutionary heroes, Aguinaldo was not as well-schooled and was not eloquent enough to sustain a political career, Suntay said.

As a failed politician, Aguinaldo’s speeches were sometimes described as “meek,” he said.

Suntay also said his great-grandfather preferred to remain a “front general,” or the military commander on the battlefield, often deferring to people who he believed were more suited to political tasks.