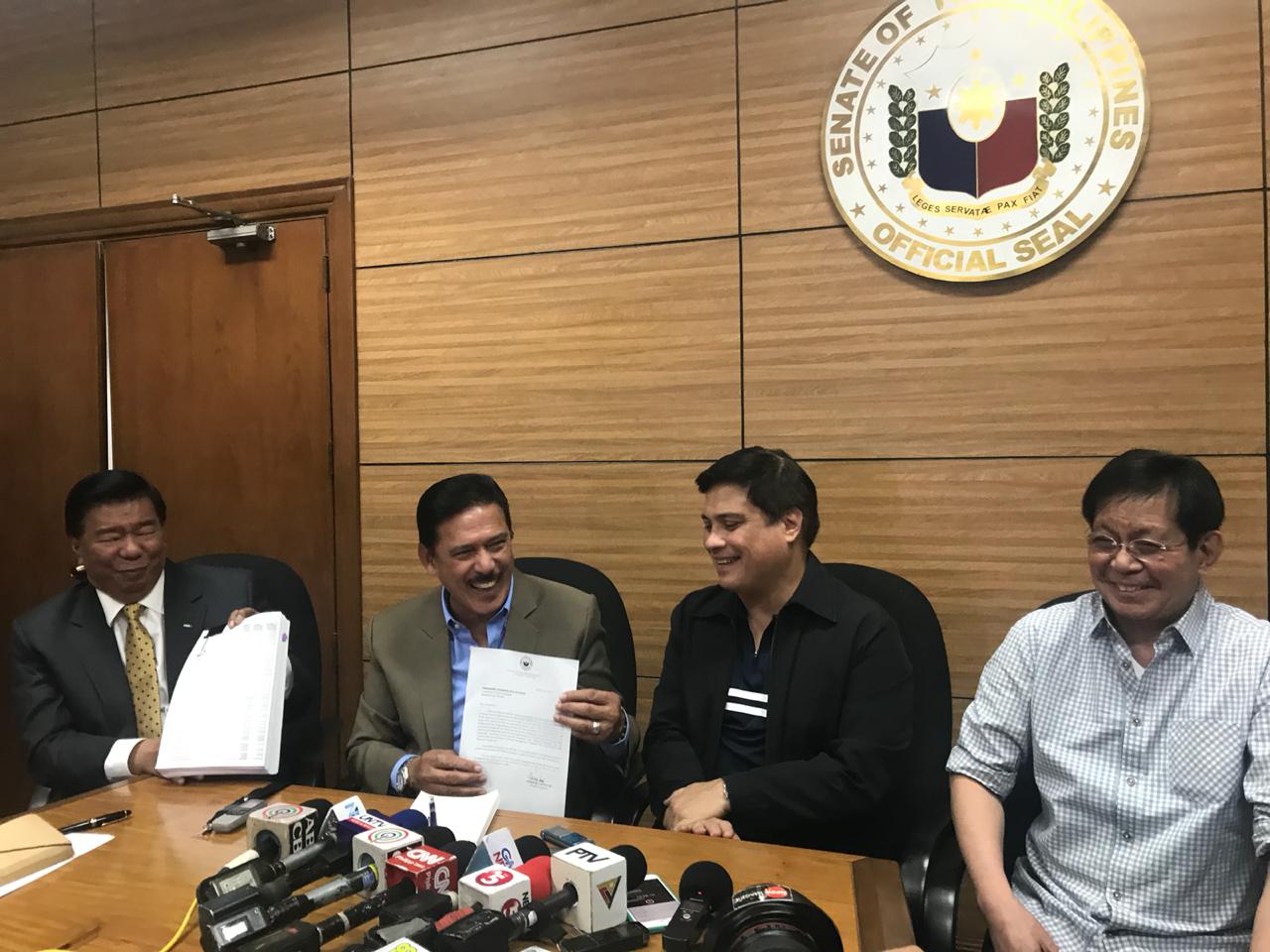 “I already signed the enrolled copy. It’s now going to be an enrolled bill presented to the President but I placed my reservations on the signature,” the Senate leader said.

In his signature, Sotto said he attached an annotation where he expressed his strong reservations.

“I affix my signature with strong reservations,” he said, reading a copy of the attachment.

“My attestation is limited only to those items approved by the bicameral conference committee and ratified both Houses of Congress.”

But Sotto maintained that the P75 billion worth of programs or projects under the Local Infrastructure Program of the Department of Public Works and Highways funded through “internal realignments” were unconstitutional.

“The President  may wish  to consider  disapproving  these  unconstitutional  realignments, pursuant to his  constitutional  power to  veto particular items in  the General Appropriations Bill,” Sotto said.

Sotto said the budget has been sent already  to President Rodrigo Duterte for signature.

The transmittal of the budget  bill  to the President   had been  stalled  due to  alleged realignments made by the House of Representatives even after the ratification of the measure by both chambers last February  8.

The House of Representatives later transmitted to the Senate the modified version of the  budget bill, which the Senate refused to  sign, saying the lower chamber’s  amendments  were unconstitutional.

But the House countered the Senate’s allegation and blamed the latter for alleged  unconstitutional lump sum appropriations in the budget.

Because of the Senate’s refusal to sign the modified  measure,  the lower chamber decided to recall  the same.

On Monday, a three-man team from both the Senate and  the House  met to iron out their differences.

Lacson said the compromise solution was  Drilon’s  idea, which the latter confirmed.

“The compromise solution  that we  have proposed is proof that while we belong to different political  persuasions in the Senate, pagdating po   sa kapakanan ng ating bayan sama-sama   kaming  nagkakaisa for the interest of the country,”  Drilon said.

He said he first raised the proposal to Lacson over a week  ago in order  to break  the deadlock.

“Because if the deadlock remains, you have about 20 percent  of the gross domestic product coming from the public sector which could not be realized because it depends on the budget,” Drilon further said.

The Minority Leader pointed out  that Sotto’s  signature in the budget measure  does not mean that the Senate agreed  with the constitutional amendments of the House.

Zubiri said Sotto signed the national budget because  he saw the “urgency” of passing it.

“We believe that it’s up to the President hopefully to be able to  look at this  and veto it if necessary if he feels  it’s unconstitutional  as we feel it,” the Majority Leader said. / gsg

Read Next
LTO: New motorcycle license plates won’t be made of metal
LATEST STORIES
After winning title, time for LA Tenorio to give back to Batangas folk
‘Mia’: Rom-com with a cause a career-boosting showcase for Coleen Garcia
No.13 lucky for Orlando Bloom
The ties that bind: Why the guys of Black Eyed Peas prefer to stay together
How Yam handles flirtatious guys
MOST READ
Nadine Lustre’s phone stolen in Brazil
Will you be the first P16 Billion Powerball jackpot winner from the Philippines?
Gretchen Barretto’s daughter Dominique graduates magna cum laude from California college
Ginebra beats Meralco again to capture PBA Governors’ Cup title
Don't miss out on the latest news and information.