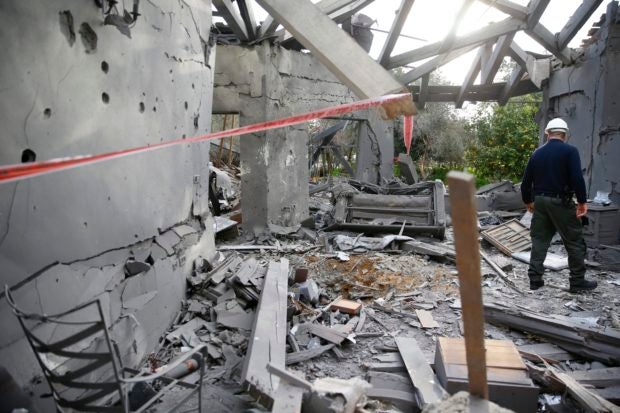 A police officer inspects the damage to a house hit by a rocket in Mishmeret, central Israel, Monday, March 25, 2019. An early morning rocket from the Gaza Strip struck a house in central Israel on Monday, wounding six people, including one moderately, an Israeli rescue service said, in an eruption of violence that could set off another round of violence shortly before the Israeli election. (AP Photo/Ariel Schalit)

The military quickly mobilized troops and called up reserves, setting the stage for a potential major conflagration shortly before Israel’s upcoming elections.

The rocket destroyed a residential home in the farming community of Mishmeret, north of the city of Kfar Saba, wounding six members of a family.

The others, including two children and an infant, had minor wounds.

The sounds of air raid sirens jolted residents of the Sharon area, northeast of Tel Aviv, from their sleep shortly after 5 a.m., sending them scurrying to bomb shelters. A strong sound of an explosion followed.

The Israeli military said militants from Gaza’s ruling Hamas movement fired the rocket from one of their launching pads in southern Gaza Strip, near Rafah.

Maj. Mika Lifshitz, a military spokeswoman, said it was a self-manufactured rocket with a range of 120 kilometers (75 miles).

She added that two armor and infantry brigades were being mobilized to the Gaza front and that a limited drafting of reserves was also taking place.

The family home in Mishmeret was left in ruins, with tiles, broken furniture and debris scattered about. A shattered baby’s crib lay among the rubble and two family dogs died in the explosion.

“It’s a miracle that nobody got killed,” said Assi Dvilanski, a Magen David Adom paramedic who was one of the first responders at the scene.

Netanyahu, in Washington to meet President Donald Trump, held emergency consultations with military officials back in Israel and decided to cut his visit short, cancelling a planned address to the AIPAC conference and meetings with congressional leaders.

“There has been a criminal attack on the State of Israel and we will respond forcefully,” he said. “In a few hours I will meet with President Trump. I will return to Israel immediately afterward.”

Israel also shut down its main crossings into Gaza and imposed restrictions on fishing off the Gazan coast. /gsg

Read Next
MWSS aims for full rebates for Manila Water customers
EDITORS' PICK
On Day 2 of implementation, gov’t says workers now exempt from ‘no vax, no ride’ policy
Gear up and get ready to play with Yamaha Mio Gear
DOH: 28,471 new COVID-19 cases in PH; active cases now 284,458
Metro Manila posts lowest temperature yet this ‘amihan’ season at 19°C
Over 3 Million worth of prizes to be won at Smart Padala’s SENDali Manalo Promo!
Acer starts the year off strong with the Aspire Vero National Geographic Edition
MOST READ
Emma Stone calls Andrew Garfield a ‘jerk’ after he ‘lied’ about his ‘Spider-Man: No Way Home’ appearance
LOOK: Edu Manzano, Cherry Pie Picache enjoy Palawan with her son Nio Tria
Unvaccinated has rights but it has limits—DOJ
Retirements prompting major reshuffle in PH military
Don't miss out on the latest news and information.