Israel says Trump to recognize Golan as its territory Monday 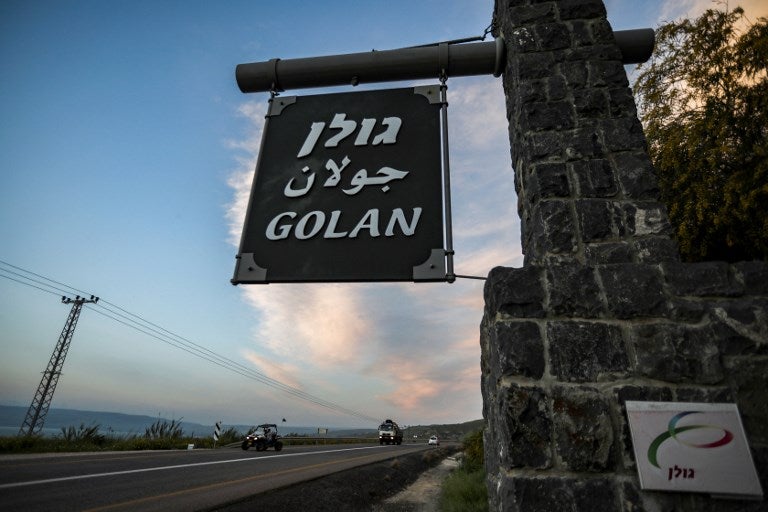 A picture taken on March 24, 2019, shows a sign reading Golan in Hebrew, Arabic, and English, located at the 1967 Israel-Syria border point, near the sea of Galilee in the Israeli-annexed Golan Heights. Israel conquered the Golan from Syria in the Six-Day War of 1967 and annexed it in 1981, but until now, the international community has not accepted the move, hoping the territory could serve as a bargaining chip in a future peace deal between the countries. US President Donald Trump is expected to sign an order recognizing Israel’s sovereignty over the disputed territory when he meets the Israeli prime minister during his visit to Washington on March 25, Israel’s foreign minister said. AFP

“President Trump will sign tomorrow in the presence of PM Netanyahu an order recognizing Israeli sovereignty over the Golan Heights,” Foreign Minister Israel Katz wrote on Twitter on Sunday.

Again breaking with longstanding international consensus, Trump said on Thursday that the United States should acknowledge Israeli sovereignty over the strategic plateau it seized from Syria in the 1967 Six-Day War.

He however left unanswered if or when he would follow through with an order to do so.

Netanyahu has long pushed for such recognition, and many analysts saw Trump’s statement, which came in a tweet, as a campaign gift ahead of Israel’s April 9 polls.

Syria and other states in the region condemned Trump’s pledge, saying it violates international law. France said the same.

Israel annexed the Golan in 1981 in a move never recognized by the international community.

The decision is the latest major move in favor of Israel by Trump, who in 2017 recognized the disputed city of Jerusalem as the country’s capital. /cbb