Party drugs: The dark side of Cebu’s club scene 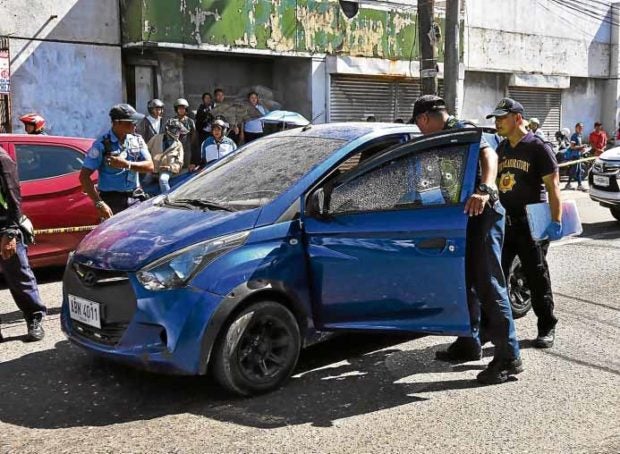 KILLED IN AMBUSH Police investigators examine the body of businessman Neil Benjamin Yap, who was shot dead by motorcycle-riding gunmen in Mandaue City on March 6. Yap was in the police diagram of a syndicate trafficking ecstasy and other party drugs in Cebu province. —JUNJIE MENDOZA

CEBU CITY—Nineteen-year-old Ashley Abad was having fun with friends at a party on Jan. 19, the eve of the Grand Sinulog parade, when she suddenly collapsed.

To their shock and disbelief, her family was told that she died from an overdose of ecstasy, a drug that induces a sense of euphoria but is deadly when taken with alcohol and in excess.

The death of Abad, a college student from a well-off family in Cebu province, has exposed what has long been talked about in whispers here—the proliferation of ecstasy, the recreational drug of choice among partygoers and other revelers in the city.

Chief Supt. Debold Sinas, director of the Central Visayas police, said the use of ecstasy and other party drugs had just been discovered in Cebu, compared to frequent reports of police seizing them during concerts or raids on suppliers in Metro Manila.

“Party drugs are not available [every day] and are only used when there are big events or parties. It’s not that alarming for now, but we should not be complacent,” Sinas said.

Sinas admitted that investigators were having difficulty tracking the source of the drugs and going after the traffickers.

“The operations are closely knit or the drugs are sold [only] to people they know,” Sinas said.

Looking like ordinary pills, ecstasy comes in different colors and are shipped through couriers.

They cannot be detected by police sniffer dogs, which are trained to uncover only “shabu” (crystal meth) and explosives.

“These drugs are associated with parties because [they] give a feeling of euphoria. Some users don’t know [what these are] so there [have been deaths],” he said.

Police officers cannot pose as buyers because ecstasy peddlers deal only with people they know and only at specific places, like bars where partygoers meet, Sinas said.

At least five clubs in Cebu are being watched by the police on suspicion that party drugs are being sold there.

Police are also investigating a suspected syndicate behind the proliferation of party drugs in Cebu.

The supplier, a businesswoman, runs a 15-member distribution channel, according to a police diagram.

Sinas, however, declined to name the suspects so as not to jeopardize the investigation.

According to sources, the woman comes from an affluent family and is known in social circles.

Eleven members of the ring have already been arrested and are now police informants.

But the same sources said the woman had been recruiting new members to replace those she had lost.

Among those arrested was Kenneth Dong, owner of LIV Superclub at the North Reclamation Area in Mandaue City.

Dong was arrested in Metro Manila on Feb. 4 for his alleged involvement in the smuggling of shabu worth P6.4 billion into the Philippines in 2017.

Another alleged member of the ring, Ken Kenneth Rosales, was killed in a shootout with police during a raid in Barangay Zapatera, Cebu City, on Feb. 22.

A businessman, identified as Neil Benjamin Yap on the police diagram, was shot dead by motorcycle-riding gunmen in Mandaue on March 6.

Police said Yap’s death could be linked to charges that he was among the suppliers of ecstasy in Cebu.

Authorities have yet to determine the value and extent of the ring’s operations in Cebu.

But Senior Supt. Remus Medina, chief of the Police Regional Intelligence Division in Central Visayas, said the supply would spike during big events or parties in Metro Cebu.

Psychologist Maryjun Delgado said young people were  drawn to ecstasy and other forms of narcotics by “peer pressure” or the need to belong.

Delgado also cited “curiosity” as a reason. “The question of how it feel[s] if I take this drug,” she said.

Wardley Getalla, regional director of the Philippine Drug Enforcement Agency (PDEA), said the drugs were coming from countries in Europe, particularly the Netherlands, and smuggled through the ports of Cebu.

“It is brought here in bulk from outside the country,” Medina said.

According to the PDEA, ecstasy is sold to the affluent because it is expensive. A tablet costs P1,000 to P3,000 each.

Drug traders also have devised their own system to keep law enforcers at bay.

During the run-up to the Sinulog grand celebration on Jan. 20, PDEA agents kept a tight watch on the party areas and the parade route.

But it was at one of those parties that Abad passed out and later died from drug overdose.

Benny Abad, the family spokesperson, denied that his niece had been using party drugs, saying she was a “victim.”

“She is everybody’s friend. Very sweet, friendly, beautiful inside and out,” he said. “And by just looking at her face, nobody would believe that she used drugs.”

Police have filed homicide charges against Abad’s boyfriend, identified as Nel Spencer Tiu, who was with her at the time.

“As the wheels of justice start to grind, we express faith in our justice system that Nel Spencer Tiu and his cohorts will be made accountable for their actions and dare them not to hide behind the phony skirt of wealth and influence,” the Abad family said in a press statement.

Delgado advised parents to always monitor their children and to always make them feel at home.

“Financial [support] isn’t enough. They must also be ready to give their children emotional care,” she said.

“If children feel the love of the family, they won’t easily give in to peer pressure,” she added.