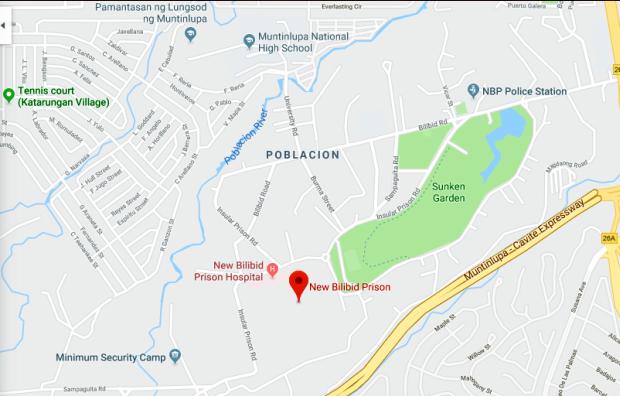 The NBP Reservation in Poblacion, Muntinlupa (Image from Google Maps)

MANILA, Philippines — Residents living around the premises of the New Bilibid Prison (NBP) are calling on the government of Muntinlupa to provide them with affordable housing as they fear displacement over projects that are supposedly part of the administration’s “Build, Build, Build” program.

Bella Diaz, president of the Kalipunan ng Mamamayan na Pinagkaisa sa NBP, Inc. (Kampina), decried the government’s move to force residents out of their homes to make way for mixed-use projects on NBP’s 366.7 hectares of land.

[Our call is for land to be given to us. If it can’t be for free, then we’ve agreed to go for affordable housing. We agreed that we will go to our mayor to ask him to help us get facilities here on NBP land which is so big.]

In a letter dated March 5, 2019, issued by the Bureau of Corrections (BuCor), NBP residents were given 15 days to vacate their houses as they were said to have been occupying government property.

“The New Bilibid Prison Reservation is a public place and danger area because convicted felons are found in the prison reservation,” the letter read. “Thus, we demand you vacate the premises within 15 days from receipt hereof; otherwise, we will be constrained to evict you from your house to protect the interest of the government.”

However, Diaz said that residents have yet to vacate their homes.

She added that the BuCor supposedly had cut off the water and electricity in the area to allegedly drive away the residents.

She noted that employees from BuCor have told them that due to Build, Build, Build projects to be constructed on the NBP land, residents would need to leave the area.

[BuCor told us that, because of the Build, Build, Build project of the government they will have to remove those living at NBP.]

[The NBP land is very big, some measuring 70 hectares, some 90 hectares, some 44 hectares, some 22 hectares. What we want is to be given some land where we can live because the land is idle. And it’s better than just giving it or selling it to foreigners.]

Diaz said that with this move would displace an estimated 10,000 NBP residents, with some who had lived in the area for more than 30 years.

On Monday, Kampina will lead 600 NBP residents in a march from the NBP gate to the Muntinlupa City Hall to hold a picket and engage in a dialogue with local officials to slam the NBP Master Development Plan, which aims to privatize the NBP for mixed-use projects on its land.