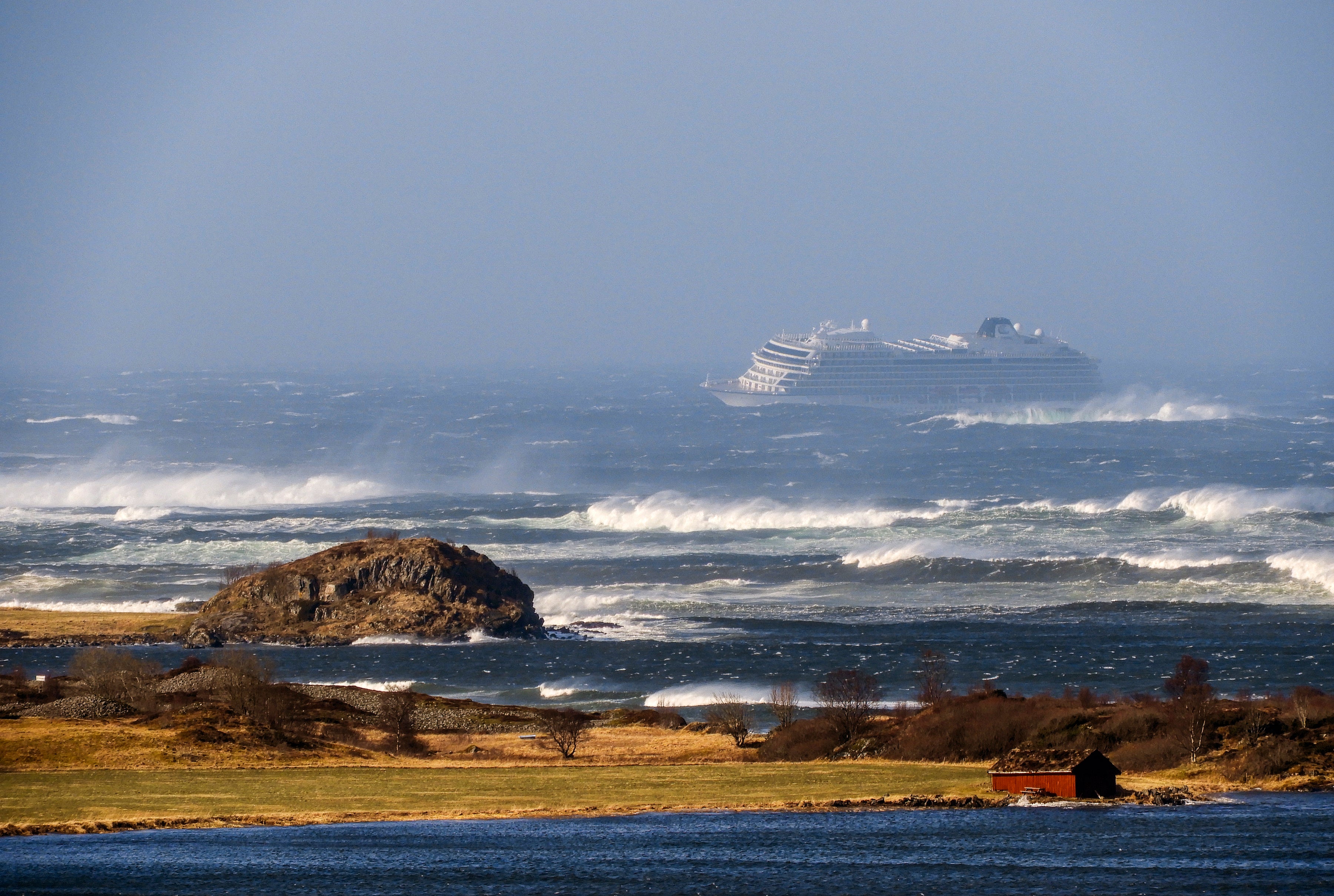 The cruise ship Viking Sky as it drifts after sending a Mayday signal because of engine failure in windy conditions near Hustadvika, off the west coast of Norway, Saturday, March 23, 2019. The Viking Sky is forced to evacuate its estimated 1,300 passengers. AP

HELSINKI, Finland — Rescue workers off Norway’s western coast rushed to evacuate 1,300 passengers and crew from a disabled cruise ship by helicopter on Saturday, winching them one-by-one to safety as heaving waves tossed the ship from side to side and high winds battered the operation.

The Viking Sky issued a mayday call as bad weather hit and engine problems caused it to start drifting toward the rocky shore, the Norwegian newspaper VG reported. Police in the western county of Moere og Romsdal said the crew, fearing the ship would run aground, managed to anchor in Hustadvika Bay, between the Norwegian cities of Alesund and Trondheim, so the evacuations could take place.

Rescue teams with helicopters and boats were sent to evacuate the cruise ship under extremely difficult circumstances, including gusts up to 38 knots (43 mph) and waves over 8 meters (26 feet). The area is known for its rough, frigid waters.

Norwegian public broadcaster NRK said the Viking Sky’s evacuation was a slow and dangerous process, as passengers needed to be hoisted one-by-one from the cruise ship to the five available helicopters.

“I was afraid. I’ve never experienced anything so scary,” Janet Jacob, among the first group of passengers evacuated to the nearby town of Molde, told NRK.

She said her helicopter ride to safety came amid strong winds “like a tornado,” prompting her to pray “for the safety of all aboard.”

The majority of the cruise ship passengers were reportedly British and American tourists. About 180 have been evacuated so far, according to rescue officials.

Per Fjeld of the Joint Rescue Center Southern Norway said there is no danger to the remaining passengers and the airlift can accommodate all of them. He said the rescue will speed up when there is better light and the weather improves.

Video and photos from people on the ship showed it heaving, with chairs and other furniture dangerously rolling from side to side. Passengers were suited up in orange life vests but the waves broke some ship windows and cold water flowed over the feet of some passengers.

American passenger John Curry told NRK that he was having lunch as the cruise ship started to shake.

“It was just chaos. The helicopter ride from the ship to shore I would rather not think about. It wasn’t nice,” Curry told the broadcaster.

NRK said one 90-year-old-man and his 70-year-old spouse on the ship were severely injured but did not say how that happened.

Later, reports emerged that a cargo ship with nine crew members was in trouble nearby, and the local Norwegian rescue service diverted two of the five helicopters working on the cruise ship to that rescue.

Fjeld said rescuers were prioritizing the nine crew members aboard the Hagland Captain cargo ship, but later said they had all been rescued and the helicopters had returned to help the Viking Sky.

He said that with two more of the Viking Sky’s engines now in operation there is the possibility of sailing, though he would not say whether there is an intention of sailing to shore.

Norwegian authorities said late Saturday that the evacuation of the Viking Sky would proceed all through the night into Sunday.

The Viking Sky was on a 12-day trip that began March 14 in the western Norwegian city of Bergen, according to the cruisemapper.com website.

The ship was visiting the Norwegian towns and cities of Narvik, Alta, Tromso, Bodo and Stavanger before its scheduled arrival Tuesday in the British port of Tilbury on the River Thames.

The Viking Sky, a vessel with gross tonnage of 47,800, was delivered in 2017 to operator Viking Ocean Cruises. /cbb