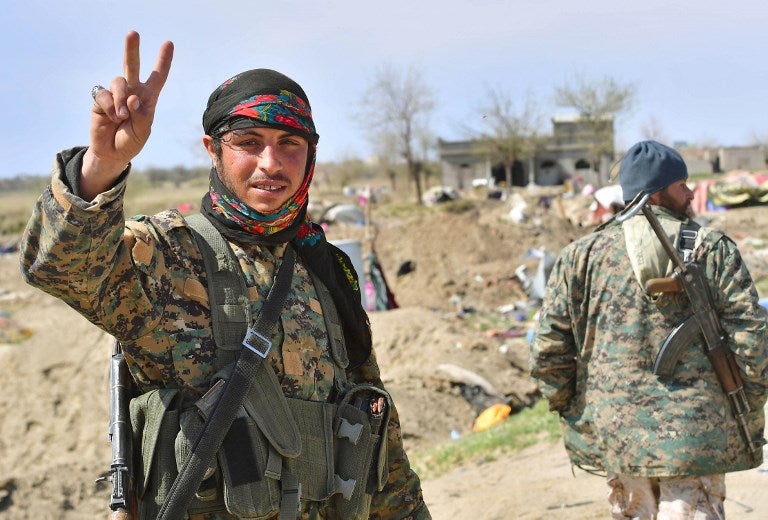 A picture taken on March 23, 2019, shows a fighter of the US-backed Kurdish-led Syrian Democratic Forces (SDF) flashing the V for victory sign in the fallen Islamic State group’s last bastion in the eastern Syrian village of Baghuz after defeating the jihadist group. Kurdish-led forces pronounced the death of the Islamic State group’s nearly five-year-old “caliphate” on March 23, 2019 after flushing out diehard jihadists from their very last bastion in eastern Syria. AFP

PARIS, France – Governments greeted the fall of the Islamic State group’s last bastion, marking the end of its self-declared “caliphate”, as a “milestone” Saturday, but warned of remaining dangers, as Syrian Kurds announced a “new phase” in the conflict.

Here is a roundup of reactions.

US President Donald Trump welcomed the news, but added: “We will remain vigilant… until it is finally defeated wherever it operates.”

Acting Defense Secretary Patrick Shanahan also welcomed the “critical milestone,” but warned that “our work is far from complete”.

President Emmanuel Macron said a source of potential terror attacks had been “eliminated,” but warned that “the threat remains and the fight against terrorist groups must continue”.

Prime Minister Theresa May called the bastion’s fall “a historic milestone” in the fight against IS, and said the British government remained “committed to eradicating their poisonous ideology”.

Foreign Minister Heiko Maas described the end of the caliphate as “an important step”, but warned “it is nonetheless clear that IS continues to represent a considerable threat,” adding: “We shall not underestimate that threat”.

NATO chief Jens Stoltenberg tweeted: “The liberation of the last territory held by ISIS/Daesh is a remarkable achievement of the Global @coalition. #NATO remains committed to our common fight against terrorism.”

“A new phase in the fight against terrorists” is beginning, said Mazloum Kobane, the overall commander of the Syrian Democratic Forces, adding that the target was now to eliminate IS “sleeper cells.” /cbb