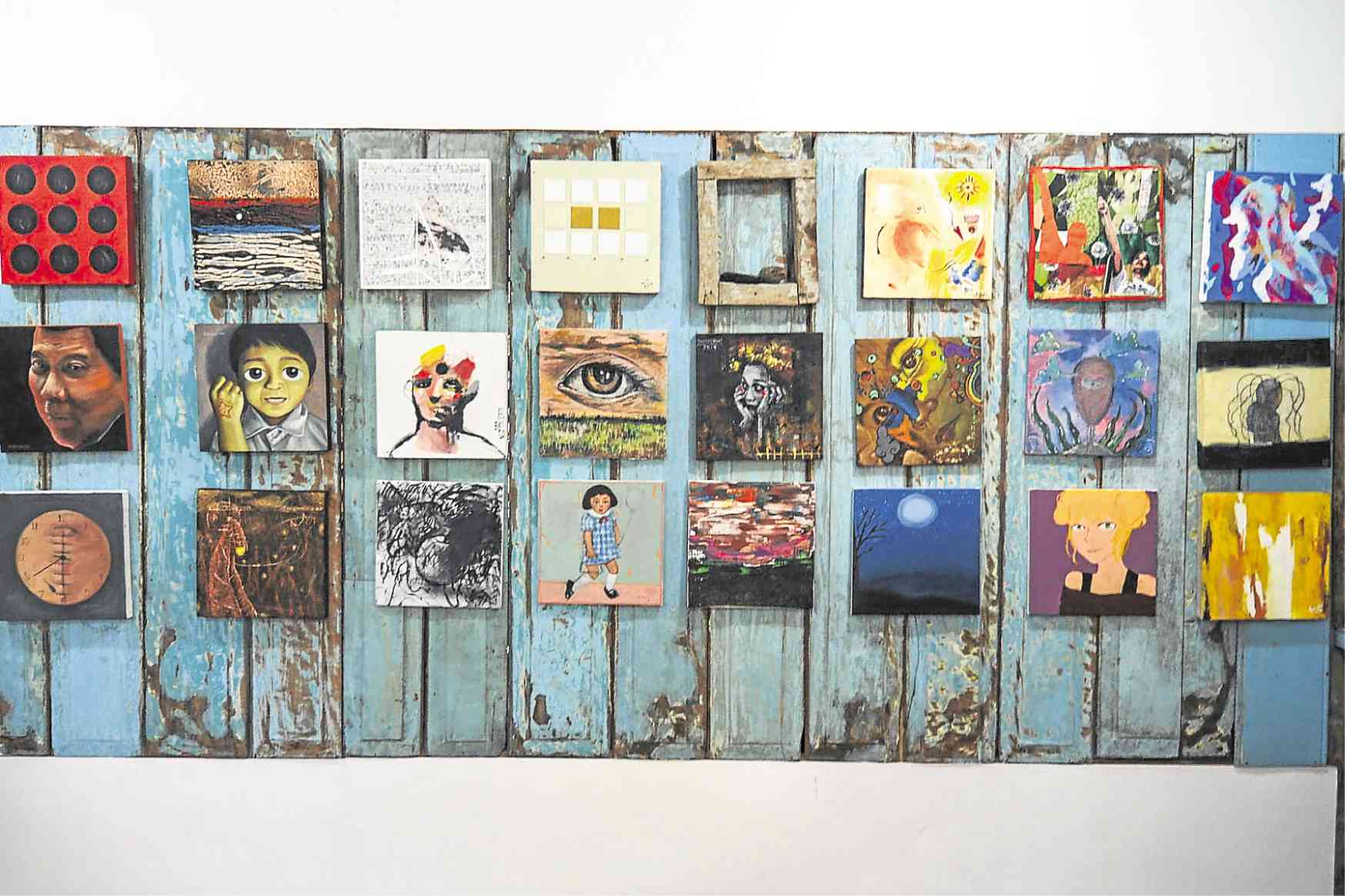 SENSORY DELIGHT A lush pocket in Amadeo town, Cavite province, is a delight for the senses as this community transforms into a haven for artists. —PHOTOS BY REM ZAMORA

AMADEO, Cavite — While hanging out over a few drinks at Barangay Halang here, visual artist Henry “Bokeng” Ancanan and sculptor AJ Manuel came up with the idea of naming the place “Alitaptap.”

The property once belonged to Ancanan’s family, and Manuel’s son wanted one evening in 2018 to catch a spider in the area but ended up collecting fireflies flickering in the mango trees.

“So we thought, ‘Why not call this place ‘alitaptap’ (firefly)?’” said Ancanan, who is also an art instructor. “Let’s make this place glow.”

Last year, his family decided to sell portions of the 5-hectare lot, paving the way for the Alitaptap artists’ village in Amadeo, a lush, coffee-producing town in Cavite province. 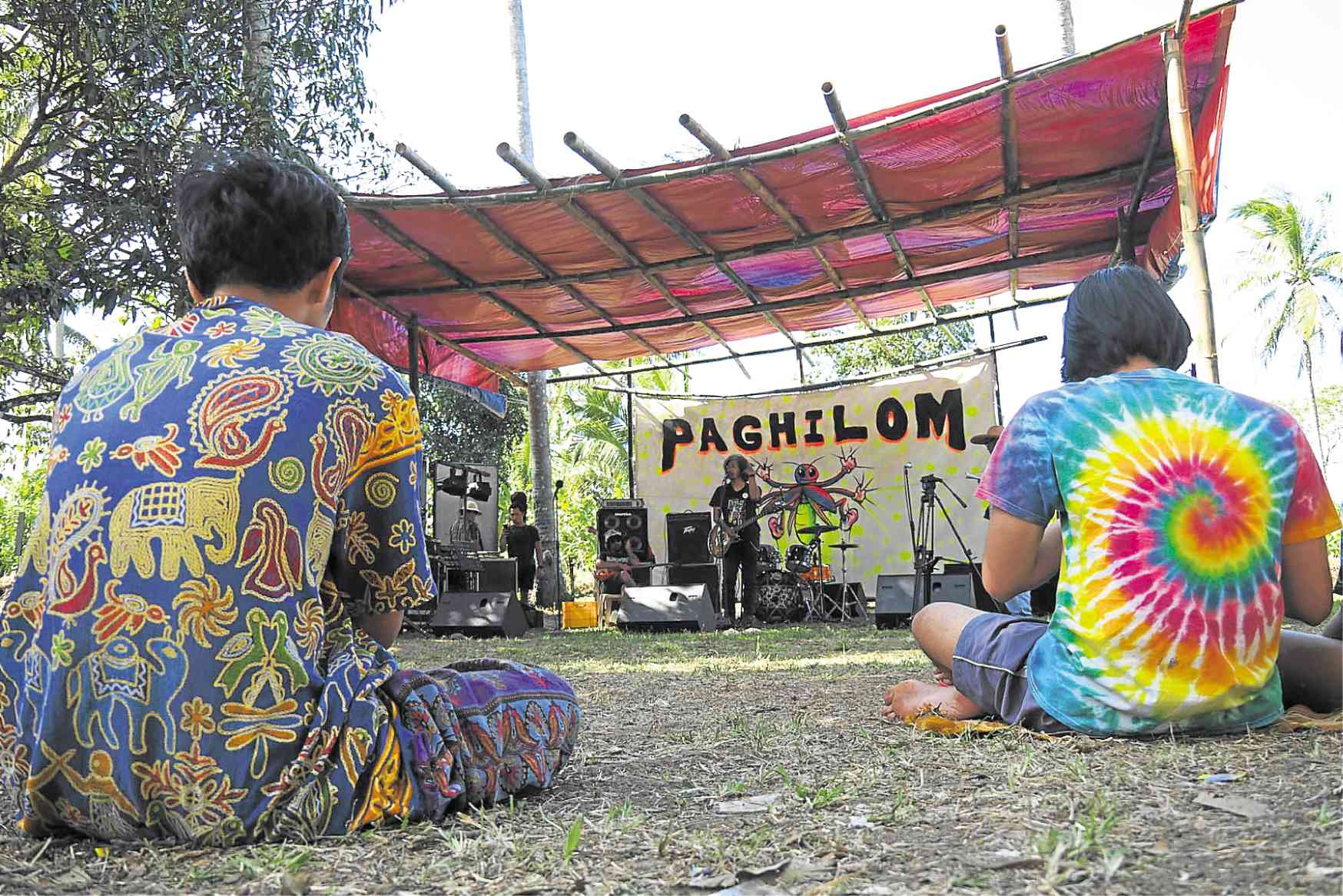 About 30 other artists and groups, like the Cavite art collective Siningdikato of sound artist Lirio Salvador, also acquired lots at Alitaptap.

A small plot was set aside for a common vegetable farm of the artist-lot owners.

The more than 150 trees in the mango farm include some from Ancanan’s 1998 art installation, when he planted a hundred mango trees at GSIS Museum in Manila for the Philippine independence centennial celebration. 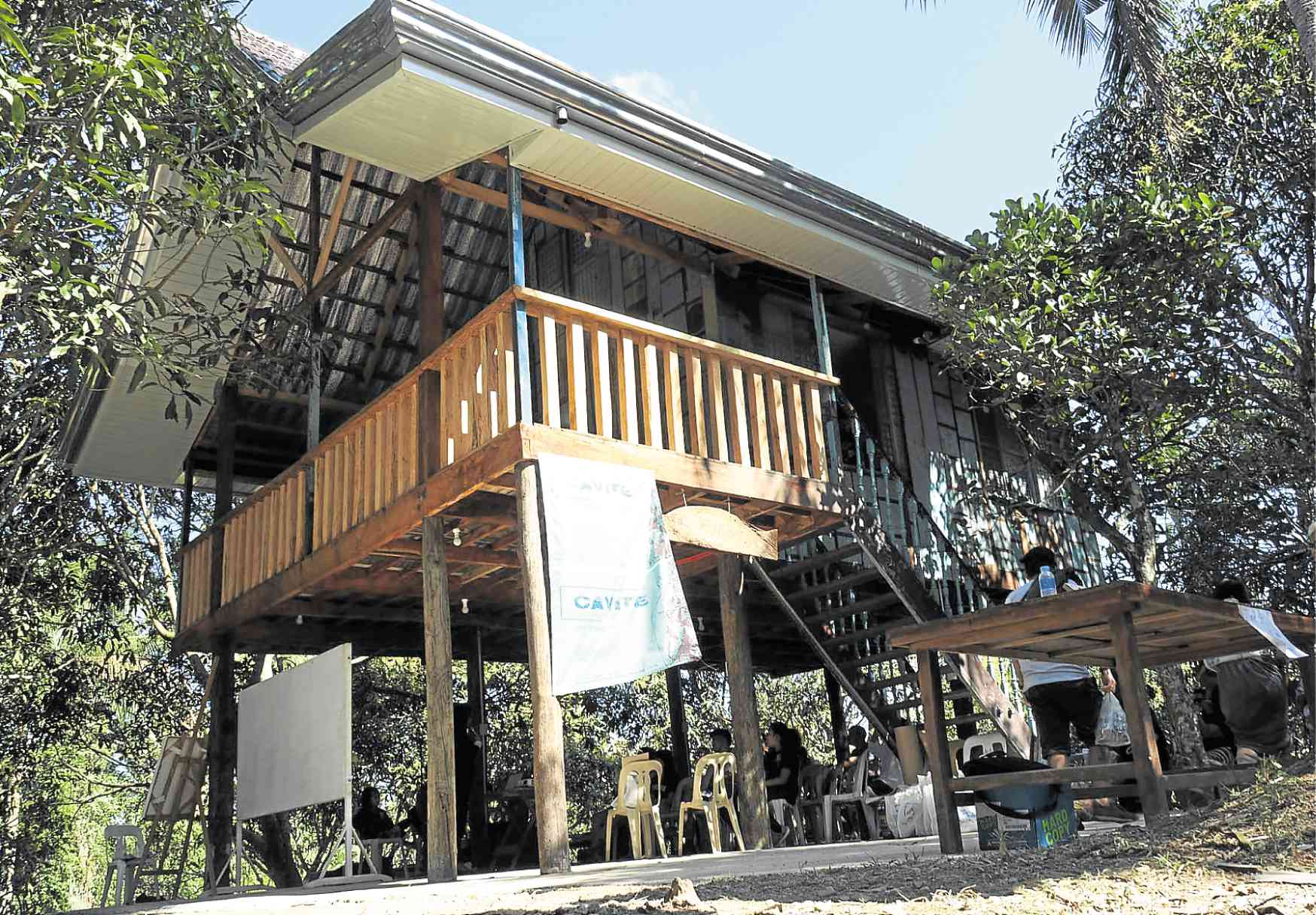 Who would have thought these trees, two decades later, would not only bear fruits but give birth to a “permanent home,” as Garibay put it, to the seasoned and budding artists, who recently organized the art festival “Paghilom.”

“We were always looking out for places to go [and] felt it was necessary to have a physical place [for artists],” said Garibay, 56, one of the conveners of Paghilom, a Tagalog word for “healing” or “renewal.”

Although there are a lot of art spaces and galleries in Manila, “they always came with a hefty price,” Ancanan said.

During Paghilom, held at Alitaptap on Feb. 28 to March 2, dream catchers and art crafts dressed up the farm, along with the works of Antipolo City-based artist Othoniel “Otto” Neri, who painted coconuts that looked like eyeballs lurking in the dark. 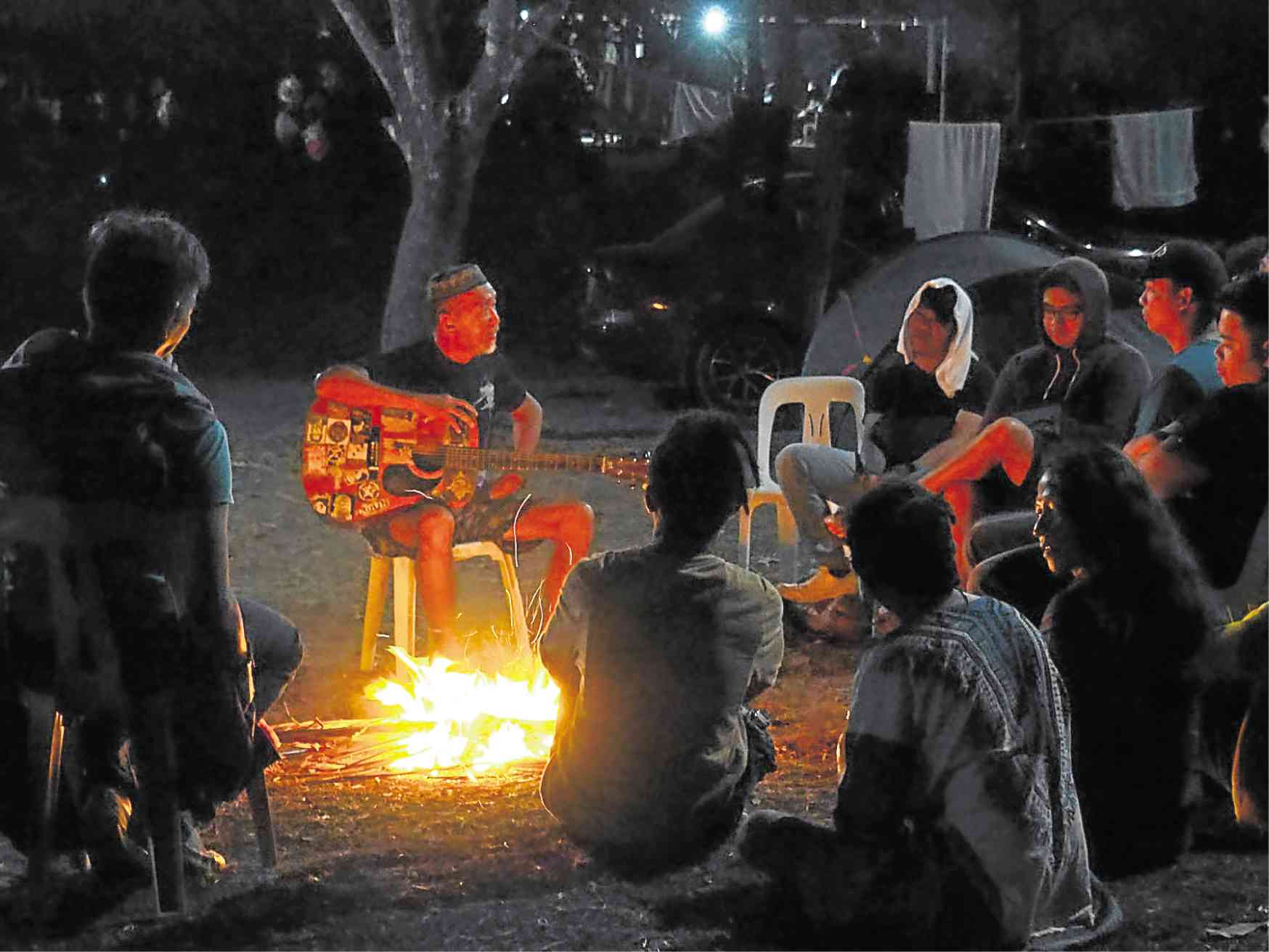 Paintings were put on exhibit and art installations strewn around, as hundreds came in for the artists’ talks, workshops on zine making, a tattoo festival and even a sports event.

On the last night, musicians Joey Ayala, The Wuds, Borrachos and Chikoy Pura performed before a crowd that pitched tents and hung hammocks from the trees.

Bonfires were lit as Baguio performance artist Rene Aquitania walked around with them.

In 2017, the group held a similar arts camp in Dasmariñas City, Cavite, and in 2018 in Pili, Camarines Sur province, which they called “Pagkarahay,” a Bicolano word for healing. 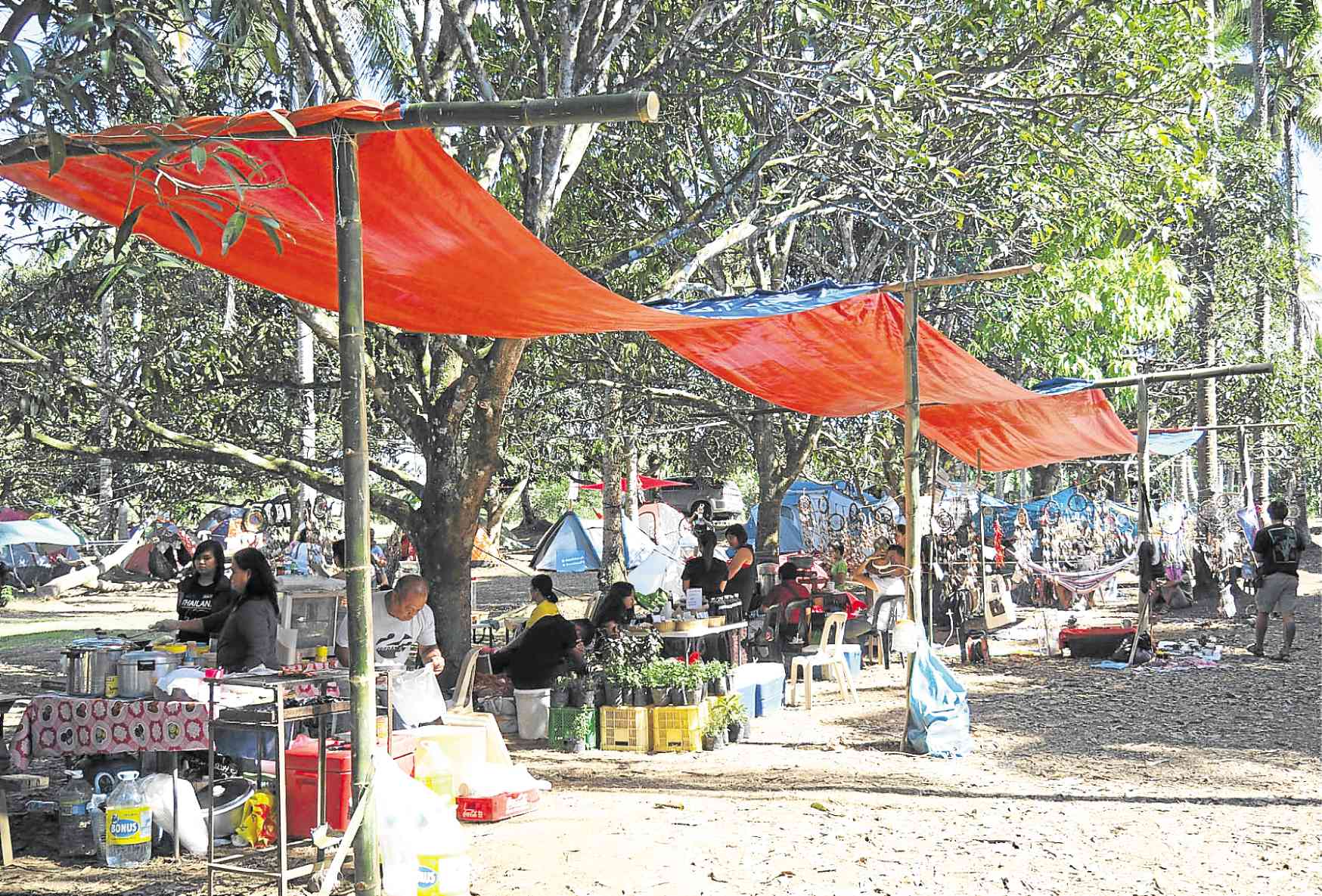 VILLAGE FAIR Arts and crafts and organic produce are sold at a makeshift market area in Alitaptap artists’ village in Amadeo.

Garibay believes that art is an “integral” part of education that shapes the society today. It is a means “to cure individuals, communities and society of its maladies,” the artists said.

Garibay said they wished to keep Alitaptap a public space by holding workshops and activities for art students and teachers.

“What we hope to establish here is to restore some sense of authenticity,” he said. “By being connected to where the people are, spend less time in studios and galleries, and really mingle … and connect with the people.”