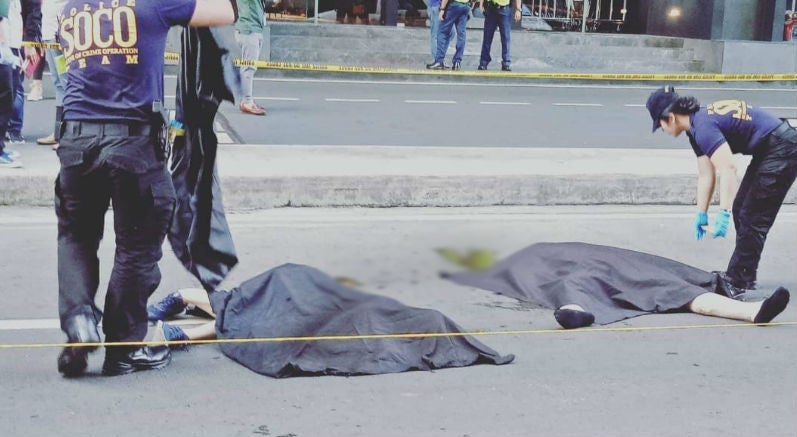 Police Scene of the Crime Operatives inspect the bodies of 2 foreign-looking men who apparently leapt off a hotel along Kalayaan Avenue in Makati City. RICHARD GARCIA/RADYO INQUIRER

MANILA, Philippines — Two foreign-looking men were found dead in front of a hotel in Makati City on Friday morning.

Senior Supt. Rogelio Simon, chief of the Makati City Police, told INQUIRER.net that they have yet to identity the two men who were found dead in front of the hotel along Kalayaan Avenue corner Makati Avenue at around 5:50 a.m.

Although police have yet to determine how the men died, investigators are looking at the angle that the two leapt off the hotel.

According to Simon, the bodies of the two men were discovered by Makati City police officers who were on patrol in the area.

Simon said before the bodies were discovered, the police officers heard a loud thud.

Scene of the Crime Operatives (SOCO) arrived at the area at around 6:30 a.m. police said.  /muf