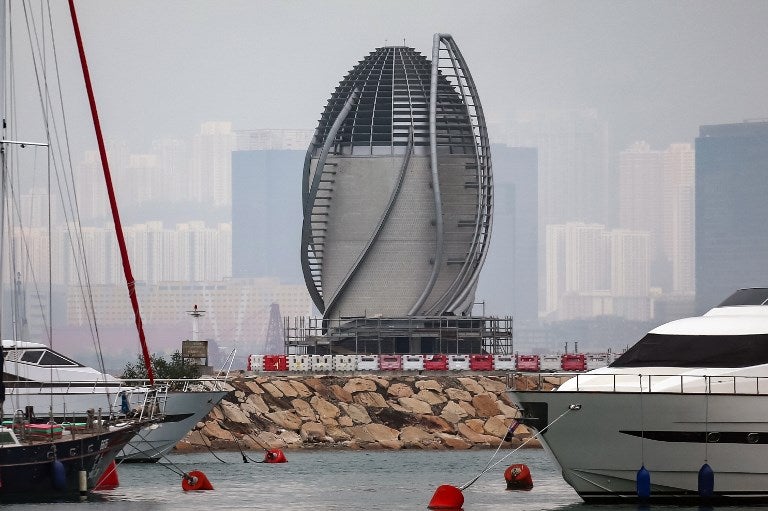 This this photo taken on March 17, 2019, the leaf-shaped ventilation shaft (C) for the air purification system of the Central-Wan Chai bypass tunnel is seen beyond anchored boats in Hong Kong. – Hong Kong this year opened a 3.7km tunnel equipped with an air purification system touted as the largest of its kind in the world in terms of volume of air handled – 5.4 million cubic meters of vehicle exhaust every hour. (Photo by VIVEK PRAKASH / AFP)

HONG KONG — As millions of people in Asia choke under polluted skies, authorities have turned to water-dispersing drones and outdoor air purifiers to improve air quality, while companies have tried to cash in by selling everything from canned air toAgence France-Presse lung-purifying teas.

According to the World Health Organisation, 92 percent of the population in the Asia Pacific region are exposed to levels of air pollution that pose a significant risk to their health, according to UN Environment.

Here is a look at some of the ways those living under the haze try to limit minimize its effects.

As public anger rises over toxic air, authorities have turned to spraying water, which is thought to stick to pollutants and carry them to the ground, but tools such as water cannons have been criticized as having little effect and being a “band-aid” solution that distracts from root causes.

New Delhi – the world’s most polluted major city – tried in 2017 to use helicopters to sprinkle water over the city, but the choppers were not able to fly due to low visibility caused by smog.

In Bangkok, the government tried a raft of measures to combat a murky haze that blanketed the city for weeks in January, including spraying overpasses with water, cloud seeding and even deploying a fleet of water-dispersing drones.

Cloud-seeding is used to stimulate rain by injecting chemicals into clouds using rockets, cannons or aircraft, but the technique is not always successful.

An attempt by South Korea to create artificial rain to tackle air pollution in January failed, after an aircraft sent to seed clouds with silver iodide only produced several minutes of misty rain.

The northern Chinese city of Xi’an is experimenting with a giant air purifier the size of an industrial smokestack which can reduce PM2.5 concentration by 15 percent within 10 square kilometers, according to researchers.

Hong Kong this year opened a 3.7km tunnel equipped with an air purification system touted as the largest of its kind in the world in terms of volume of air handled – 5.4 million cubic meters of vehicle exhaust every hour.

The government says it will be able to remove at least 80 percent of harmful particulates and nitrogen dioxide using large fans which suck exhaust into air purification plants in three ventilation buildings along the tunnel.

New Delhi last year announced a plan to install huge air purifiers at traffic intersections and mount air filters on the roofs of buses that trap pollutants as they move, according to Hindustan Times.

During particularly bad spates of air pollution, which tend to come during the winter, residents in smoggy Chinese cities escape to cleaner places, such as resorts in the south of the country, for a temporary break and return after it has cleared.

Ctrip, China’s largest online travel agent, estimated in 2016 that every year, over a million residents of smoggy cities such as Beijing and Shanghai leave the country to escape the smog.

Popular destinations for these so-called “smog refugees” include places such as Japan, Australia,  and New Zealand. Some even travel to Antarctica on these “lung-cleansing trips,” according to Ctrip.

Although experts say residents in smoggy cities are unlikely to see health effects from breathing bottled air, that hasn’t stopped entrepreneurs from selling them canisters of the stuff from New Zealand, Canada, Australia, and Switzerland.

For about US$22, consumers can order an 8 liter can of Banff Air from the popular tourist spot in Canada, or pay US$125 for a jar of air from the British countryside.

In China, “anti-smog” teas are promoted by vendors as a way to clean the lungs, while Mongolian residents drink “oxygen cocktails” – made by spraying oxygen into glasses of juice using machines or cans of air.

Advertisements boast that “drinking just one oxygen cocktail is equal to a three-hour-walk in a lush forest”, despite no scientific evidence they protect from pollution.