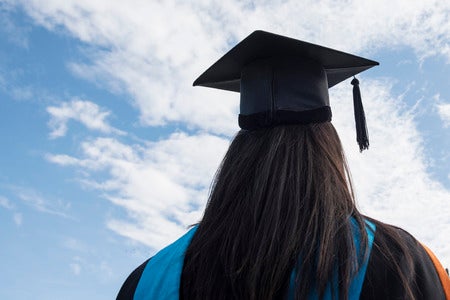 After being questioned for intending to wear female clothes for the baccalaureate mass and graduation day, Emma Bueno, a graduating student of Ateneo de Naga University and a trans woman, wrote a letter to their university’s President.

His response overwhelmed her.

“One of my transphobic/homophobic teacher called the attention of the graduation committee questioning my way of wearing female clothes for the baccalaureate mass and graduation day. So I wrote a letter personally to the Father President and his response made me emotional,” Bueno stated in her Twitter post on March 19.

Here's the letter I sent to Father President 💙💛 pic.twitter.com/yx58s8ptjC

The university’s president, Fr. Roberto Exequiel N. Rivera S.J., whom she fondly called “Father President,” approved Bueno’s appeal to allow her to “wear clothes that reflect her gender identity as a Transgender Woman” on their baccalaureate mass and graduation day.

He even gave her reassurance should there be any further problems about her clothing: “Emma, Pls. present this letter if your clothing is questioned. Congratulations! -Fr. Rivera”

Bueno said that she didn’t expect that their university president will reply to the letter, and much more, congratulate her.

“Didn’t expect he would positively respond to my letter huhu he even congratulated me! I stan a progressive Father President,” said Bueno.

With this experience and knowing what it feels like to be different, Bueno wants to tell her fellow trans women to continuously strive for equal rights and tackle repressive policies head on.

“Always remember that you are valid. Find your safe space and from there allow yourself to shine. Slay the world,” added Bueno.

The graduation day is scheduled on the same day as Bueno’s birthday.

“I think this is the best gift I have ever received,” the future graduate said. JB