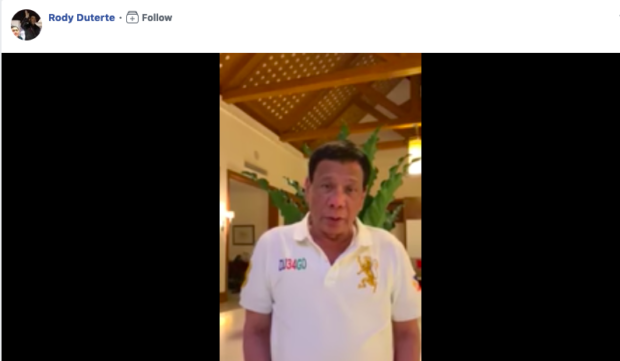 President Rodrigo Duterte delivering a message in a video uploaded on Facebook.

MANILA, Philippines—President Rodrigo Duterte on Thursday slammed former Bacolod City Mayor Monico Puentevella for supposedly “twisting” his speech to put a mayoral candidate in the city in a bad light.

In a video posted on Duterte’s official Facebook page, the President said Puentevella, who is running for congressman in Bacolod City, deliberately “twisted” his speeches to tag incumbent city Mayor Evelio Leonardia, who is seeking for reelection, in the illegal drug trade.

“‘Yung sinabi ni Mayor Monico [Puentevella] na pinangalanan ko si Leonardia as one of the [narcopoliticians]…it was, purposely and intentionally, binaliktad ‘yung salita [it was twisted]. Hindi naman ho fair ‘yan [That is not fair]. Actually, my advice kay Mayor Monico is that ‘wag ganoon,” he added.

Last week, Duterte revealed the names of 46 politicians who were allegedly involved in the illegal drug trade.

In the recorded message, the President hit Puentevella for “splicing” and “mixing up” his speech when he bared the names of the narcopoliticians. He also clarified that the names of Puentevella and Leonardia did not appear on the list.

(You have spliced my speeches and added other… You have mixed them up to make it appear Leonardia is involved in drugs. That is not right. Even Monico is not there, his name does not appear there and neither Puentevella.)

Duterte clarified that he was referring to his meeting with city mayors in Malacañang when he mentioned Leonardia’s name.

The President went on to express his support for Leonardia, whom he referred to as the “more direct and honest” candidate.

“I am supporting Leonardia for the mayorship of Bacolod City. I think the better guy is the more direct and honest. Siya ang gusto kong maging mayor, I am supporting him,” he added. /jpv