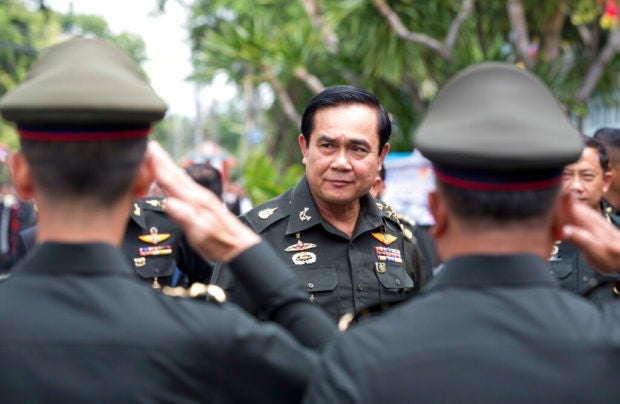 FILE – In this Aug. 21, 2014, file photo, Thailand’s Prime Minister Prayuth Chan-ocha, center, arrives for an anniversary ceremony for the 21st infantry regiment, Queen’s Guard, in Chonburi Province, Thailand. Prayuth became prime minister in a very Thai way: He led a military coup. Now after five years of running Thailand with absolute power, he’s seeking to hold on to the top job through the ballot box. The military’s thinly veiled proxy party has put forward Prayuth as its nominee for prime minister after Sunday’s election. But running the show in an elected government may not be as easy though since he’ll no longer be able to muzzle opponents and rely on a rubberstamp legislature. (AP Photo/Sakchai Lalit, File)

Now after five years of running Thailand with absolute power, he’s seeking to hold on to the top job through the ballot box. The military’s thinly veiled proxy party has put forward Prayuth as its nominee for prime minister after Sunday’s election.

“He knows he can’t be a dictator like this forever,” said Prajak Kongkirati, a political science lecturer at Bangkok’s Thammasat University. “He wants to gain more legitimacy and that’s why he’s holding the elections. He wants to return as a prime minister under normal politics.”

After toppling the elected government in May 2014 with a pledge to “return happiness to the people,” Prayuth outlawed criticism of his regime and vowed the country would not have elections as long as there was dissent. He promised elections and then delayed them every year he was in power.

That’s given Prayuth time to smooth out some rough edges. He’s shed some awkward military stiffness, while still keeping a general’s swagger. He’s worn increasingly well-tailored suits — for which his wife takes credit — and, as pressure for an election mounted, largely transformed himself into the Thai equivalent of your typical baby-kissing politician.

He can boast some accomplishments during his time at the helm, most notably some cleanup of the aviation, fishing and wildlife industries — which had put Thailand at peril of foreign economic sanctions — along with stepping up the fight against human trafficking, which also risked trade retaliation.

Running the show has been fairly smooth though thanks to his government’s clampdown on opponents, the rubberstamp legislature he hand-picked and the law he enacted making all of his actions legal.

Should he remain prime minister after the election, he will be without what he refers to as his “special powers” and his patience could be tested as he has to deal with actual elected lawmakers who may be unwilling to dance to his tune.

“He has a strong personality — vigorous and direct. If he tries to become a politician, he could try to change but he would never really be able to change 100 percent,” said Supparuek Tongchairith, a veteran military beat reporter for Thai Rath, the country’s largest-circulation newspaper. “Because his boiling point is low, if anyone pokes at him, he will explode. And for him to sit in the parliament, I guarantee, he will run into troubles.”

In one respect he has been the instrument of the conservative forces in Thai society. They could not accept the rise of billionaire politician Thaksin Shinawatra, whose populist policies after being elected prime minister in 2001 threatened to unravel the country’s long-established power structure: Bangkok-oriented, devoted to the monarchy and safeguarded by the military.

Prayuth, 65, was born and raised in an army family at a military camp in the northeastern province of Nakhon Ratchasima. He attended a military preparatory school and graduated from Chulachomklao Royal Military Academy, Thailand’s West Point.

Prayuth was already a senior figure in the army when it staged a 2006 coup against Thaksin, justifying the putsch as a way to stop alleged abuse of power, self-enrichment and corruption by the prime minister that had triggered large protests. Some suggested that Thaksin sought to usurp the monarchy’s place in Thai society.

Instead of easing tensions, the coup set off a bitter and often violent struggle for power between Thaksin’s supporters and his opponents. Thaksin had his fortune and newly empowered poor and rural followers on his side; arrayed against him were the courts and the military, deeply loyal to the monarchy, which traditionally has been the country’s most influential institution.

It was in this period that Prayuth climbed the ladder to the top of the military hierarchy. As commander of the First Army Region, he helped lead the bloody suppression of pro-Thaksin demonstrators in central Bangkok in 2010. In October that year, he became the army commander-in-chief.

After abandoning a sham effort to mediate between the Thaksin-backed government and its opponents who had been staging violent protests against it, Prayuth and the leaders of the other armed forces announced they were seizing power on May 22, 2014.

Prayuth and his junta spelled out their major tasks, including brokering national reconciliation and enacting reforms across Thai society to save the nation from what it said was the inherent corruption of politicians.

While the leaders of the 2006 coup restored electoral democracy after about a year in power only to see Thaksin’s allies bounce back, it quickly became evident that this junta had no intention of allowing any Thaksin-allied party from coming to power again. It was also clear that any attempts at reconciliation were going to be one-sided.

Under Prayuth’s junta, called the National Council for Peace and Order, many civil liberties were curbed and military courts judged civilian political offenders. Government critics were summoned, or sometimes snatched off the streets, for “attitude adjustment” at army camps, a week or so in detention at an army base with a stern lecture to elicit a promise not to do it again. Longer term measures, such as a new constitution and election laws fashioned to handicap Thaksin’s political machine, were also enacted.

Prayuth, who was unanimously elected prime minister by his appointed legislature, has a famously quick temper and can bristle at anyone who questions him. Couple that with a sometimes off-color sense of humor and it can lead to verbal attacks, gaffes or just plain bizarre moments.

He’s jokingly told reporters he would have them executed, quipped that he might behead a soap opera star who called for elections, flung a banana peel at a cameraman and given an entire news conference in which he fondled the ear of a nearby sound technician.

Since the coup, the general has also drawn attention for his songwriting, penning a number of sappy ballads with nationalistic lyrics.

Prayuth — who has twin daughters, now grown, who for a time were in a pop band called Badz — has at times taken on the role of tough-love dad, especially during his weekly primetime television broadcast aired on all major Thai stations, “Returning Happiness to the People.” The monologues can last an hour and half and touch on everything from the moral responsibility of youth to tips on cultivating orchids.

Yet allegations of nepotism against Prayuth’s own relatives have led to uncomfortable accusations of hypocrisy. After the coup, a company owned by one of Prayuth’s nephews that had no track record of projects was awarded lucrative army construction contracts. Prayuth’s brother, also a former high-ranking army man, drew criticism when it was revealed that he made another son who had no military experience an army officer.

Of course the most glaring contradiction may be Prayuth’s own transformation.

As it became more likely he would seek to stay on as prime minister, he began allying with the very politicians he initially declared were the targets of junta reforms and launched government handouts that were nearly carbon copies of Thaksin’s populist policies.

Early last year he made it clear, telling reporters: “I am no longer a soldier. Understood? I’m just a politician who used to be a soldier.” /jpv