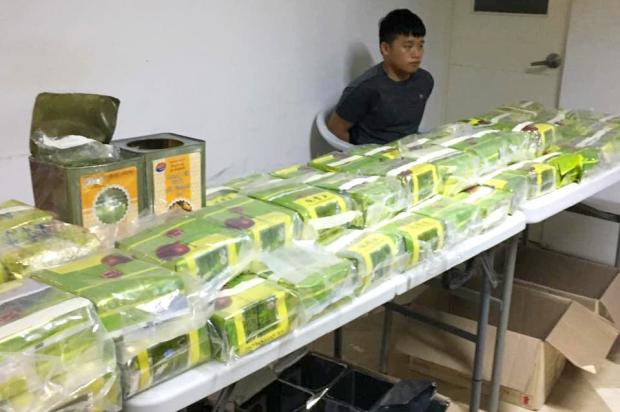 PDEA agents arrested this Chinese national during the raid in Muntinlupa. (Photo from PDEA)

The representative of the congressional district where narcotics agents had seized P1.1 billion worth of “shabu” (crystal meth) proposed on Wednesday that house-to-house searches be conducted on rented properties in exclusive subdivisions to check whether these were being used by crime gangs, especially drug traffickers.

“I call on property owners and residents [of subdivisions] to cooperate and actively participate in weeding out those involved in the drug trade, which is a great scourge to society. At this time, each and every rented or vacant property should be checked and profiled to rule out its use by criminal elements,” Biazon said.

The Philippine Drug Enforcement Agency (PDEA) on Tuesday arrested three Chinese men and their Filipino interpreter in buy-bust operations at a shopping mall in Barangay Alabang and at Ayala Alabang Village, a tightly guarded posh enclave in Muntinlupa City where some of the country’s prominent lawmakers, politicians and business executives live.

PDEA Director General Aaron Aquino said the 166 kilos of shabu, the second-largest drug haul this year, might have been smuggled from the “Golden Triangle” region that includes parts of Laos, Myanmar and Thailand, and southern China where syndicates manufacture drugs.

He said they were also looking into the liability of the owner of the Ayala Alabang property rented by the Chinese suspects.

The two-story house has no furniture or signs of occupancy, as it is used purely for storing shabu, Aquino said.

Biazon urged the barangay and village association of the posh subdivision to review their security policies and adopt measures to prevent the use of rented properties for illegal activities.

He called for a “thorough investigation” to determine lapses committed by  authorities and officials of private entities, and hold them “accountable and prosecuted if warranted.”

“How the hell did that volume pass through Customs and the police checkpoints?” Lacson posted on Twitter on Wednesday. “And the Chinese nationals? WTF!”

Biazon said authorities must determine whether the entry of foreign drug syndicates was due to the “weaknesses in the border security systems of the country or complicity by border security personnel.”

The shabu was hidden in Chinese biscuit tins and tea bags, the same type of packaging used to transport drugs by the Golden Triangle syndicates that had been interdicted by authorities in Thailand, Vietnam, Malaysia, Myanmar and Laos, according to Aquino.

The bulk, consisting of 123 kilos worth P836 million, was recovered from a house along Apitong Street in Ayala Alabang, where one of the three Chinese, Wu Yi, also known as Li Zhaoyang, 19, was arrested.

The others—Kei-Kei Go, 40; Kian Kok Chua, 43; and their interpreter, Emmanuel Pascual, 79—were arrested at the mall.

How they got in

Aquino said in a news conference following Tuesday’s operations that investigators had yet to determine how the drugs were brought into the country.

He indicated that they were likely smuggled by sea, noting the country’s extensive and largely unguarded coastline.

In the first major drug bust this year, two Chinese men were killed at a warehouse in Tanza, Cavite province, on Feb. 2. The operation, which involved teams from the PDEA, PNP and military intelligence, led to the seizure of 274 kilos of shabu worth about P1.9 billion. —With reports from Maila Ager and AP