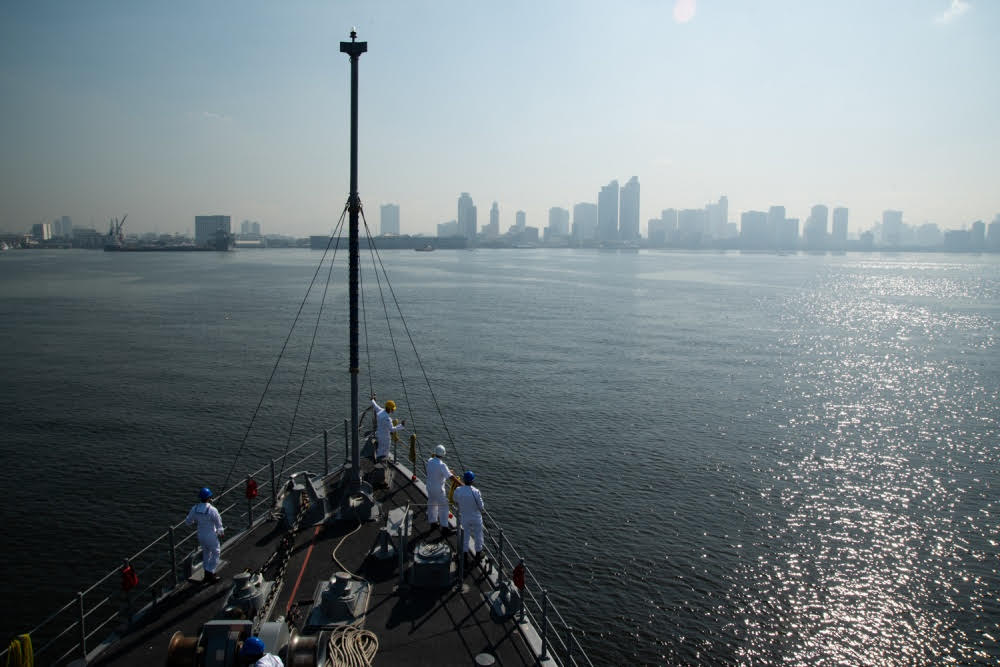 MANILA, Philippines — The US Navy made its second port visit to Manila in less than a week.

USS Chief (MCM-14), an Avenger-class mine countermeasures ship, dropped anchor in Manila on Sunday. It followed USS Blue Ridge, the flagship of the 7th Fleet, which arrived in Manila on March 13.

USS Chief (MCM-14), an Avenger-class mine countermeasures ship of the US Navy, is in Manila for a port visit. It‘s the second US warship to visit here in less than a week. USS Blue Ridge, US 7th Fleet’s flagship, arrived here last week. pic.twitter.com/zjzGRa4iGN

The US minesweeper is tasked to hunt and destroy naval mines that may be in the Indo-Pacific region.

What sets mine countermeasures ships like USS Chief apart are its wooden hulls.

“Basically it’s a wooden ship because there are different threats in the water we’re dealing with mine warfare. You want to be able to reduce your magnetic signature and what a better way to do that is make a ship entirely out of wood,” Crayton told reporters on Wednesday.

This is the first time for the US minesweeper to visit the Philippines and the officers and crew are looking forward to the experience.

“We’re excited to make the most of this port visit in the hope of fostering a closer and stronger relationship with Filipino people and to interact with the people we have sworn to defend with our Mutual Defense Treaty,” said Lcdr. Frederick Crayton, commanding officer of the USS Chief.

USS Chief commanding officer LCDR Frederick Crayton: “We’re excited to make the most of this port visit in the hope of fostering a closer and stronger relationship w Filipino people and to interact w the people we are sworn to defend through our Mutual Defense Treaty.” pic.twitter.com/To3grzlpJV

They are also scheduled to meet Philippine Navy officials to exchange insights and enhance interoperability.

“We are taking the opportunity to interact with the government to support Indo-Pacific region to ensure security and stability,” Crayton said.

The visit of USS Chief comes after the US 7th Fleet has vowed to stay committed to ensure that the South China Sea remained open to all kinds of navigation.

Early this month, US Secretary of State Mike Pompeo made the long-awaited clarification to the Philippines that the Mutual Defense Treaty (MDT) would apply in case it gets attacked in the South China Sea.

The Philippines and the US are bound by the MDT, signed on August 30, 1951, which calls for both states to come to each other’s defense against an armed attack. But the US commitment to defend the Philippines if the attack involves disputed territories has persistently raised doubts in recent years. /kga