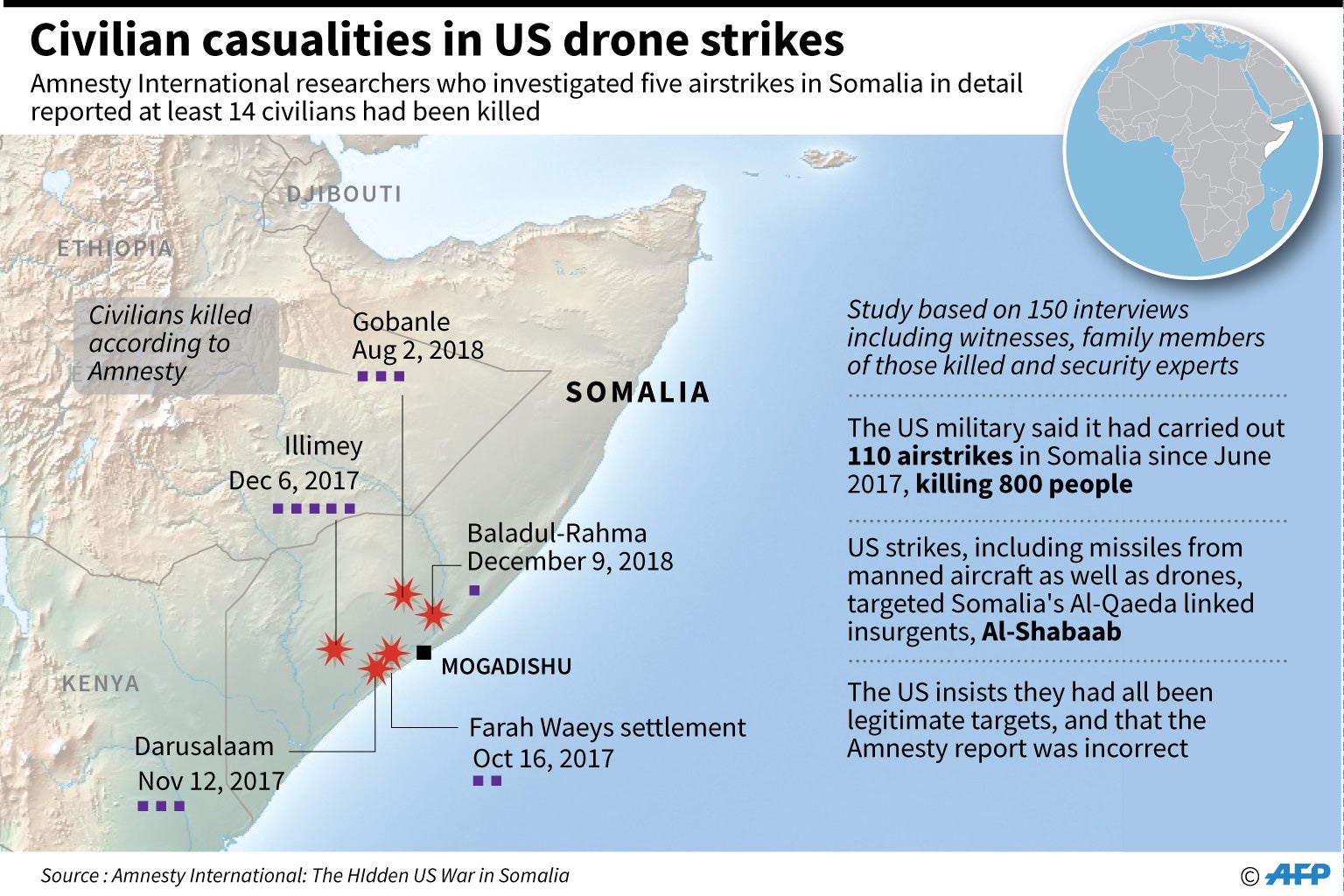 NAIROBI, Kenya — Amnesty International Wednesday accused US forces of killing several civilians in Somalia as they “dramatically increased” the number of air strikes in the volatile country, but the U.S. military denied the deaths.

The U.S. military said it had carried out 110 strikes by drones and manned aircraft in the past two years in Somalia, killing over 800 people, but insisted every death was that of a “terrorist.”

But Amnesty researchers who investigated five air strikes in detail reported at least 14 civilians had been killed — raising fears the total dead in the scores of attacks may be far higher.

“The attacks appear to have violated international humanitarian law, and some may amount to war crimes,” Amnesty said in the report, titled “The Hidden U.S. War in Somalia”.

The study is based on 150 interviews including witnesses, family members of those killed and security experts.

Their reports were corroborated by satellite imagery, photographs of the deep craters of the explosions, as well as munition fragments collected from the sites.

Amnesty said that since April 2017, the U.S. “has dramatically increased the number of air strikes – from manned aircraft and unmanned drones – it has launched in Somalia, tripling the annual rate of attacks.”

It said the number of U.S. air strikes is more than the number of those it carried out in Yemen and Libya combined during the same period.

But the U.S. Africa Command (AFRICOM) insisted they had all been legitimate targets as members of Al-Shabaab, and that the Amnesty report was incorrect.

“Since June 2017, AFRICOM conducted 110 airstrikes in Somalia, eliminating more than 800 terrorists,” it said in a statement, adding that “our assessments found that no AFRICOM airstrike resulted in any civilian casualty or injury.”

AFRICOM added that it was “in the interest of the terrorist group al-Shabaab to untruthfully claim civilian casualties.”

Amnesty’s military expert Brian Castner said that “the civilian death toll we’ve uncovered in just a handful of strikes suggests the shroud of secrecy surrounding the U.S. role in Somalia’s war is actually a smokescreen for impunity.

It said U.S. forces carried out 34 strikes in 2017 following Trump’s declaration, more than in all the previous five years since 2012 combined.

The Shabaab have been waging an insurgency against Somalia’s foreign-backed government for over a decade, and while it has lost ground, continues to stage deadly attacks in the country as well as in neighboring countries such as Kenya.

The rising number of strikes has raised concern among aid workers in Somalia, a war-torn country reeling from decades of conflict. Over 1.5 million people are deemed to be struggling in “crisis and emergency” conditions, according to UN assessments, while 4.6 million people need food aid.

“More airstrikes and fighting mean more families will flee their homes, and civilian lives will be at risk,” said Evelyn Aero from the Norwegian Refugee Council, which works in Somalia supporting some of the most vulnerable people.

“As a party to the Geneva Conventions of 1949, the U.S. has an obligation to protect civilians,” Aero added.  /muf