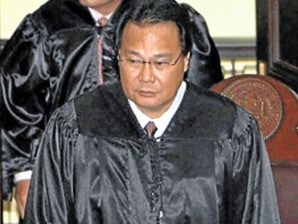 UNDER HEAVY FIRE “I assure you I do not intend to leave and do as they please,” says Chief Justice Renato C. Corona LYN RILLON

“This is very important, grave and historic,” Speaker Feliciano Belmonte declared after a hastily called caucus of the ruling Liberal Party and its coalition partners and party-list groups that  three hours later produced the articles of impeachment against Corona.

“We realize the gravity of this decision,” Belmonte added.

He said the 57-page document was signed by more than the one-third of the 285 House members, a requirement under the Constitution to impeach the Chief Justice without going through the plenary debates.

By late Monday night, the count had reached 188, according to Representative Niel Tupas Jr., chairman of the justice committee which initiated the process.

The grounds for Corona’s ouster included betrayal of public trust, culpable violation of the Constitution and graft and corruption, citing specifically in the eight articles of impeachment his “undue closeness” to Arroyo who is under hospital arrest for electoral sabotage.

Belmonte explained that since the representatives’ signatures had been verified by the House secretary general, the case could be sent directly to the Senate either later Monday night or on Tuesday in the short-circuited process.

He said the 11-member prosecution team would be formed by Wednesday and would bring the case formally to the Senate.

Senate President Juan Ponce Enrile said it was likely that the 24-member Senate would constitute itself as an impeachment court next year. The Senate and the House are due to take a Christmas break on Wednesday and will resume sessions in January.

“I think we would no longer have time for the rest of the year,” Enrile told reporters.

House Minority Leader Edcel Lagman called the move “the mother of all blackmails.”

“The Supreme Court justices are being blackmailed not to decide pending cases against the Aquino administration, otherwise the wrath of impeachment will be on them,” Lagman said.

“The derogation of our democratic institutions is almost complete with the emasculation of the House of Representatives, the violation of civil liberties, the impairment of the rule of law and now the destruction of the Supreme Court and the judiciary.”

Belmonte and another Liberal Party stalwart, Cavite Representative Joseph E.A. Abaya, revealed that a “furious” President Aquino wanted a “fast” impeachment against Corona after he and seven other Arroyo appointees had issued a temporary restraining order (TRO) to block the travel ban against Arroyo.

“He was infuriated after the SC issued the TRO. He called me up and told me how he felt bad that the SC was intervening in behalf of Arroyo. He felt that this should stop,” Belmonte said in an interview. “This is our own game plan, we just had his support.”

Abaya said in an interview that the President had told him that he felt Corona was the “last stumbling block” to his core reform agenda and that Mr. Aquino did not want to spend the next five years in office clashing with the high tribunal.

“He gave the general direction, we followed because we believe this is the right thing,” Abaya said.

After gathering forces in the Liberal Party,  Mr. Aquino moved to consolidate his allies from other parties, according to Abaya.

Belmonte and Abaya said the House leaders went to work immediately to build a case against Corona “and go to every detail and ensure that it will stand on strong legal ground.”

Mr. Aquino monitored the caucus, according to Belmonte. “I texted him about results that we had already reached 172. And he said, ‘thanks,’”

The Speaker said the majority had been talking about Corona’s impeachment for weeks prior to yesterday’s caucus and they only decided to push through with it after getting at least 95 supporters.

Partiality and subservience in cases involving the Arroyo administration from the time of his appointment as Supreme Court associate justice up to his dubious midnight appointment as Chief Justice and up to the present.

Failure to disclose to the public his statement of assets, liabilities, and net worth as required under Section 17 Article XI of the Constitution.

Failure to meet and observe the stringent standards under the Constitution that provided that a member of the judiciary must be a person of proven competence, integrity, probity, and independence in allowing the Supreme Court to act on mere letters filed by a counsel which caused the issuance of flip-flopping decisions in final and executory cases; in creating an excessive entanglement with Mrs. Arroyo through her appointment of his wife to office; and in discussing with litigants cases pending in  the Supreme Court.

Blatantly disregarding the principle of separation of powers by issuing a status quo ante order against the House of Representatives in the case concerning the impeachment of then Ombudsman Merceditas Gutierrez.

Wanton arbitrariness and partiality in consistently disregarding the principle of res judicata, or resurrecting decided cases, and in deciding in favor of gerrymandering in the cases involving the 16 newly created cities, and the promotion of Dinagat Island into a province;

Partiality in granting a temporary restraining order in favor of Arroyo and her husband Jose Miguel Arroyo in order to give them an opportunity to escape prosecution and to frustrate the ends of justice, and in distorting the Supreme Court decision on the effectivity of the TRO in view of a clear failure to comply with the conditions of the Supreme Court’s own TRO.

Corona will be the third high official to be impeached by Congress but the second under the fast-track method after then  President Joseph Estrada in 2000. In March, former Ombudsman Merceditas Gutierrez was impeached through voting on the floor after going through the committee process. With reports from Cathy Yamsuan, PDI and Maila Ager, INQUIRER.net