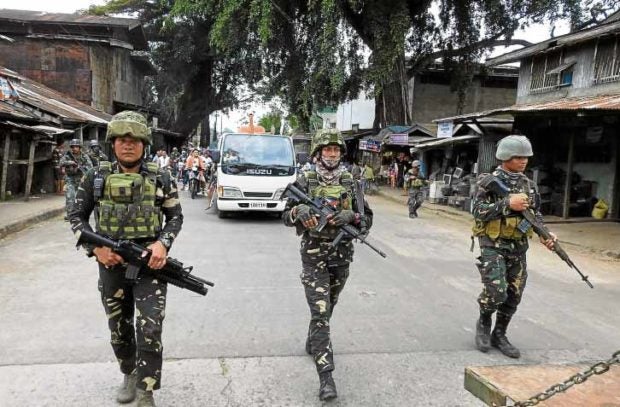 TIGHT GUARDING Soldiers escort the hearse for one of the victims of the Jan. 27 bombing of the Jolo cathedral that killed 22 people and wounded more than a hundred. —AFP

Defense Secretary Delfin Lorenzana on Tuesday debunked a claim by an international security analyst that some 100 Islamic State (IS)-inspired terrorists have moved their operations to Mindanao.

In an interview on the sidelines of Tuesday’s turnover rites of Japan’s donation of aircraft spare parts and maintenance equipment to the Philippine Air Force in Clark Air Base, Pampanga, Lorenzana said: “I would like to debunk that theory of Mr. (Rommel) Banlaoi. I think he was saying that there were already 100 ISIS [terrorists] in Mindanao.”

Banlaoi is the chair of the Philippine Institute for Peace, Violence and Terrorism Research.

Lorenzana pointed out that sustained military operations in Mindanao against IS-inspired groups have resulted in the death of one of their leaders, Abu Dar, and their loss of territories in the South.

Abu Dar, one of those behind the 2017 Marawi City siege, is believed to be among the four Maute group remnants who were killed last week in a firefight with troops from the Army’s 49th Infantry Battalion in Tubaran, Lanao del Sur.

His death, however, has yet to be confirmed.

“They (foreign terrorists) are escaping. They are going back to their own countries. Now if we have Filipinos there fighting in Syria, then we might expect them to be coming back here,” he said, adding that the foreigners are mostly Malaysians or Indonesians.

“The likelihood that they might transfer from one country to another is very big,” Lorenzana added, saying that the Philippines is closely coordinating with the Malaysian and Indonesian governments to make it difficult for the foreign terrorists to escape by moving between countries.

“We are also intensifying our operations in the South so we can eliminate them altogether,” he said.

“I do not believe they (IS-inspired groups) are growing here,” Lorenzana added.

Lorenzana was responding to Banlaoi’s claim that around 100 foreign terrorists have entered the country and have joined local bandits.