Abra province, two towns in Isabela and Northern Samar also to be placed under Comelec control
02:59 AM March 20, 2019 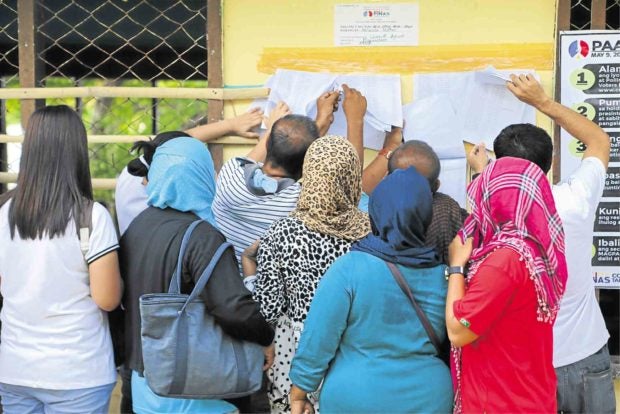 ENSURING ORDER In this 2016 photo, voters look for their names in a precinct in Shariff Aguak, Maguindanao. For this year’s local elections, the Commission on Elections has placed the entire Mindanao under its control to maintain peace and ensure order as Mindanaoans cast their votes. —JEOFFREY MAITEM

The Commission on Elections (Comelec) has declared the entire Mindanao, Abra province and two other areas as election hot spots in the May 13 elections.

These areas, which were classified under “category red,” would be under the control of the Comelec.

The military and police may also be called to augment existing peacekeeping personnel in these areas “as the need arises,” the poll body said in a statement.

Aside from Mindanao and Abra, also declared as hot spots were Jones town in Isabela province and Lope de Vega town in Northern Samar province.

The declaration came in the wake of suspected election-related incidents in the last two elections, together with armed threats posed by the New People’s Army and other armed groups like the Bangsamoro Islamic Freedom Fighters and the Abu Sayyaf.

The Comelec, Philippine National Police and the military identified the election hot spots using these classifications:

Category green to refer to “areas of no security concern and are relatively peaceful and orderly.”

Category yellow to refer to “areas with a history of election-related violence or the existence of intense partisan political rivalry.”

Category red to refer to “areas where, while being under category orange, government agencies declare the existence of conditions which may be grounds for the declaration of Comelec control.”

In December last year, Congress granted President Duterte’s request to extend, for the third time, martial law in Mindanao until the end of 2019.

Citing several fatal bombings in Mindanao last year, Mr. Duterte asked for the extension to quell terrorist groups that, he said, “continued to defy the government by perpetrating hostile activities.”

He first declared martial law in Mindanao after groups allied with the Islamic State laid siege to Marawi City in May 2017. The fighting between government troops and gunmen belonging to the Maute and Abu Sayyaf groups in Marawi took five months.

In Abra, past elections saw the emergence of armed groups supporting political families that had resulted in killings and attacks on candidates. —TINA G. SANTIOS