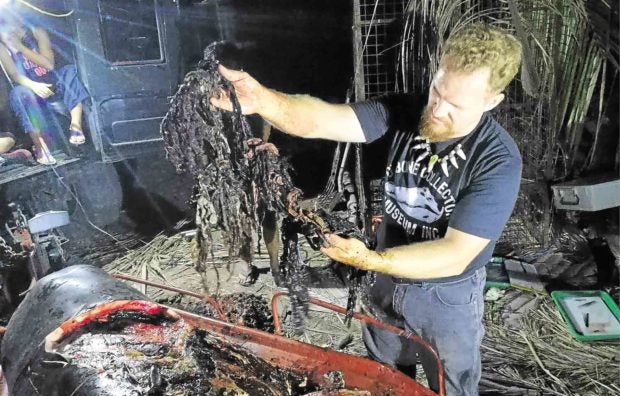 The discovery of a dead whale, with 40 kilograms of plastic trash in its stomach, in Compostela Valley should serve as an urgent call for corporations to curb its plastic production and for people to be mindful of their throwaway lifestyle, environmental group Greenpeace said on Tuesday.

Photos uploaded by the D’Bone Collector Museum, a natural history museum in Davao City, on its Facebook page showed its founder, Darrell Blatchley, pulling out sheets of bloodied plastic and other garbage from the carcass of a juvenile male Cuvier’s beaked whale.

The museum said it received news early on Saturday from the regional Bureau of Fisheries and Aquatic Resources office that the whale was on the shores of Sitio Asinan in Barangay Cadunan. The marine mammal died at 11 a.m. that day.

In a post that accompanied the photos of the necropsy, Blatchley said the garbage from the dead whale included 16 rice sacks, four “banana plantation style bags” and multiple shopping bags.

“This whale had the most plastic we have ever seen in a whale,” the post read. “It’s disgusting.”

Abigail Aguilar, campaigner for Greenpeace Southeast Asia-Philippines, said the frequency of marine animals dying due to plastic ingestion was alarming.

“In Davao Gulf alone, three whales and a dolphin have been found dead with plastic in their stomach for this year and we are just about to close the first quarter of 2019,” she said in a statement.

Aguilar said that in less than a year, whales, dolphins and turtles had perished, not only in the Philippines, but also in Thailand and Indonesia, showing a clear proof on how plastic pollution gravely affected ocean animals.

Just last week, Greenpeace had documented the extent of plastic pollution in Verde Island Passage, a 1.14-million hectare strait within the Mindoro-Calavite-Tablas triangle declared by scientists as the “center of the center of marine shore fish biodiversity.”

Photos from Greenpeace showed sachets of condiments settling on coral beds and a tiny crab trapped inside a discarded plastic cup.

“We can never emphasize enough how urgent it is for corporations to reduce the production of single-use plastic and redesign packaging and systems,” Aguilar said, noting that citizens should not only be mindful of their trash, but also put pressure on both government and the industry to take steps against the plastic crisis.

Plastic pollution remained among the country’s top environmental issues, with the Philippines being ranked as one of the world’s top ocean polluters.

A 2015 report by international group Ocean Conservancy said the Philippines, China, Indonesia, Thailand and Vietnam contribute over half of all the plastics that end up in the seas.

In Zamboanga del Norte province, a fisherman found a dead dolphin on the shores of Barangay Delusom in Leon B. Postigo town on Monday night.

Police said George Escobido was about to go fishing at 6:30 p.m. when he saw the dolphin, which was already decomposing.

Ricardo Mahinay of the municipal fisheries office said they decided to burn the dolphin, “because it is emitting [a] foul smell … there’s no more flesh in the stomach area, we can see the ribs.”

This was the third time since 2012 that a dead dolphin was found on the shores of Leon B. Postigo, officials said. —With a report from Mart Sambalud