Valenzuela City slowly turning green, one park at a time 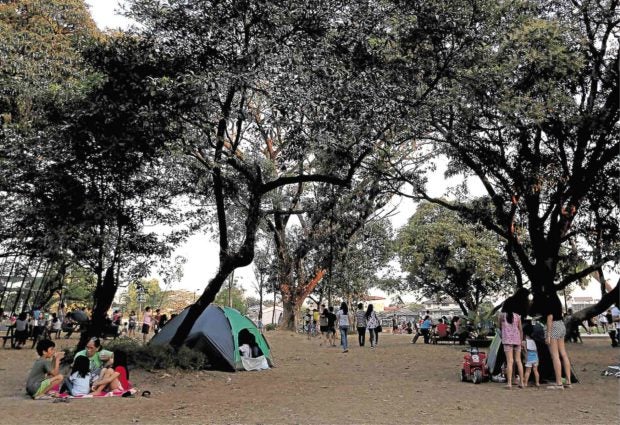 A portion of Valenzuela, the highly-industrialized city that is home to over 3,000 warehouses and factories, has turned green.

Since its opening last month on the busy Karuhatan Road at Barangay Gen. T. de Leon, the Valenzuela City Family Park has been attracting residents looking for a place to unwind for free.

On a hot Thursday afternoon, the 1.1-ha park was bustling with activity. An ongoing excavation at an adjacent lot was kicking up dust and contributing to the overall noise but no one seemed to mind.

At a picnic table under a mango tree, a group of students were singing a jingle with the melody borrowed from Queen’s “We will rock you.”

In another corner of the park, children were rehearsing the dance steps to K-pop group Momoland’s “Bboom Bboom.”

There was also a group of women relaxing with their babies on a wooden bench while keeping an eye on their older children who were running around on the playground.

The park sits on a portion of the 6-ha compound formerly owned by Far Eastern Broadcasting Co. When the lot was bought by real estate developer, Filinvest, part of it was donated to the city government for development into a recreational area.

Part of the park’s charm are the dozens of century-old trees like acacia and mango that provide shade to visitors. Since the trees are protected from being cut, the city’s zoning board allowed Filinvest to build higher structures on its portion of the property to offset the lost income from its donation.

Valenzuela Mayor Rex Gatchalian told the Inquirer that the opening of the city’s second park came after officials observed that “the city [was] choking.” To make a sustainable and livable city, one must take back open spaces, he said. 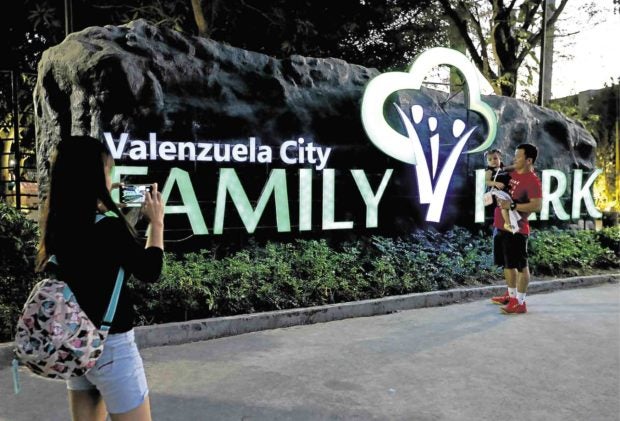 NEWEST FAMILY HANGOUT The Valenzuela City Family Park has become an instant hit among residents since its opening last month. —Photos by Richard A. Reyes

The local government started with the “lifestyle interactive” People’s Park in the center of the city. It quickly became popular, with residents trooping there, especially on weekends.

“We realized that the People’s Park wasn’t enough. In our master plan, the city needs at least a dozen of these parks,” Gatchalian added.

Even though it acquired the  lot for free, the city government still had to shell out money for the park’s landscaping and the construction of facilities like restrooms and a water fountain.

There is an aviary that is home to four peacocks and two eagles, courtesy of residents who could no longer care for them. A small amphitheater was also built inside the park to  serve as a concert venue.

Food stalls that sell flavored fries, popcorn and refreshments stand near the entrance. But the crowd pleaser is the playground that has slides, mini obstacles and a climbing wall for kids. There are also fitness equipment available for adults.

The World Health Organization says that apart from the immediate benefits of parks such as serving as a filter against pollution and producing oxygen, they can also improve people’s physical and mental health. The natural environment “reduces physiological stress indicators,” it adds.

Raschel dela Cruz, one of the visitors at the park that day, said that Valenzuela City could use more open spaces. According to her, a big percentage of residents live far away from the family park and it would be helpful if there were more of these.

Augusto Bondoc, a senior citizen who came to the park with his son and granddaughter, said they had trouble finding a parking spot although they would not mind coming back for another visit.

Tria Angeles, who brought along her 4-month-old shih tzu, had a suggestion for improving the park: “It would be better if the place had more animals, like ducks in a pond.”