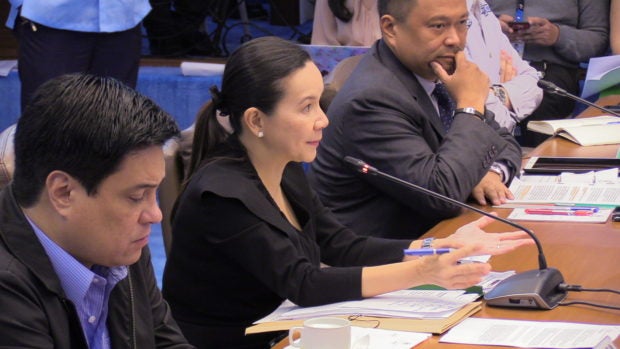 MANILA, Philippines — The Metropolitan Waterworks and Sewerage System (MWSS) is even more liable on the ongoing water shortage affecting thousands of people in Metro Manila and nearby areas, Senator Grace Poe said Tuesday.

Poe said the MWSS was not able to properly address the water shortage even though the Manila Water has earlier notified the agency of an impending water crisis.

She pointed out that it was the task of the MWSS to prod concessionaires to repair their pipes and other facilities that would have prevented the wastage of water due to leakages.

This, she said, could have averted the water shortage being currently experienced by consumers in Metro Manila.

She pointed out that non-revenue water, or the water that was wasted due to leakages, reaches up to 40 percent.

“If MWSS has been very firm that the concessionaires need to repair the pipes and all the other aqueducts and the transmission lines immediately, wala na sana tayong problema ngayon na ganyan,” Poe said.

Poe said the members of the MWSS should be replaced already, pointing out that the agency needs to put in more engineers among their ranks.

She pointed out that the MWSS is mostly composed of lawyers who do not have the technical know-how of Metro Manila’s water situation.

“Ako sa tingin ko dapat palitan na sila eh. The most important thing is the composition has to be according to how that law was actually intended,” she said.

During the hearing of the Senate public services committee on the water shortage, Senator Joel Villanueva noted that the MWSS Board of Trustees is composed of six lawyers, two retired military personnel, and one chemical engineer.

In a statement, Villanueva said it is a “clear violation” of the MWSS charter.

“We’re also shocked when we discovered that not one single board member of the current MWSS Board of Trustees possessed a degree in civil or sanitation engineering, a clear violation of its charter,” Villanueva said.

Villanueva said the MWSS Charter states that the board should “possess any one or a combination of the following qualifications: (a) duly licensed professional of recognized competence in civil engineering and/or sanitary engineering; (b) business management and finance, and law, or (c) recognized labor leader within the ranks with sufficient training, particularly in the field of labor-management relations or corporate practice.”

He said the lack of a civil or sanitation engineer in the MWSS board could be one of the reasons for the ongoing water shortage in Metro Manila.

“I think the lack of a civil or sanitation engineer in the board is one of the reasons why we are in this situation now,” Villanueva said.