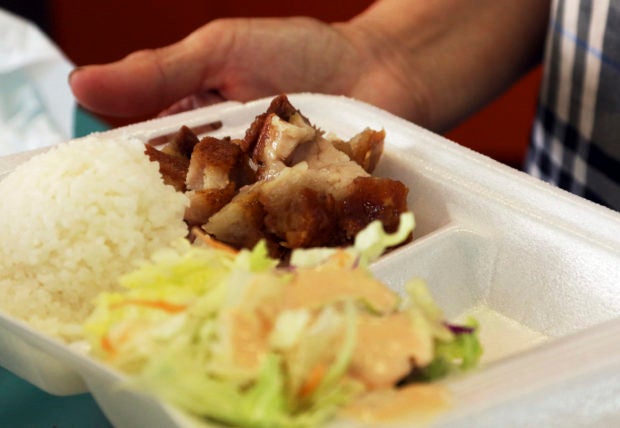 In this Thursday, March 14, 2019 photo, Belinda Lau, manager of the Wiki Wiki Drive Inn takeout restaurant in Honolulu, holds a polystyrene foam box containing an order of roast pork, rice and salad. Hawaii would be the first state in the nation to ban most plastics used at restaurants, including polystyrene foam containers, if legislation lawmakers are considering is enacted. The aim is to cut down on waste that pollutes the ocean. (AP Photo/Audrey McAvoy)

HONOLULU – Hawaii would be the first state in the U.S. to ban most plastics at restaurants under legislation that aims to cut down on waste that pollutes the ocean.

Dozens of cities across the country have banned plastic foam containers, but Hawaii’s measure would make it the first to do so statewide.

The liberal state has a history of prioritizing the environment — it’s mandated renewable energy use and prohibited sunscreen ingredients that harm coral.

The Hawaii efforts would be stricter than in California, which last year became the first state to ban full-service restaurants from automatically giving out plastic straws, and broader than in Seattle, San Francisco and other cities that have banned some single-use plastics.

Activists believe the foam container measure has a better chance of passing in Hawaii.

“We have this reputation of setting the example for the world to follow, and that’s what we’re trying to do here,” state Sen. Mike Gabbard, lead author of the more ambitious measure, said to the Senate.

“Our state can once again take the lead in protecting our environment.”

Gabbard, father of Democratic presidential candidate and U.S. Rep. Tulsi Gabbard, said 95 percent of plastic packaging worldwide is thrown out after being used once.

In the U.S., 500 million plastic straws are used and thrown out every day, he said.

Discarded, slow-to-degrade plastic is showing up at sea, as in a massive gyre northeast of the Hawaiian islands, and on beaches.

Plastics also contribute to climate change because oil is used to make them, said Stuart Coleman, Hawaii manager for the Surfrider Foundation.

Eric S.S. Wong, co-owner of two fast-food establishments on Oahu, said not being able to serve food in plastic foam containers would drive up his costs at a time when he faces rising health insurance charges for his employees and a possible minimum wage hike that lawmakers also are considering.

He said he’ll have to raise prices.

A package of 200 foam boxes costs him $23, while the same number of biodegradable boxes would cost $57, he said.

Chris Yankowski of the Hawaii Restaurant Association, which represents 3,500 restaurants, said lawmakers are trying to do “too much too fast.”

Yankowski, who is also president of Triple F Distributors, argued that good alternatives to plastic products are not yet available. Hawaii’s cities and counties also don’t provide composting facilities, so there is no organized place to dispose of compostable containers that lawmakers say restaurants should use instead, he added.

“It’s almost like we want to do great things for the environment, but we’re not ready to handle it when we change it over,” Yankowski said.

The Hawaii Food Industry Association, which counts the state’s biggest supermarkets and convenience stores as members, initially opposed the foam container ban but now supports it.

The president of Island Plastic Bags, a Hawaii company that makes plastic bags, said the legislation would prohibit his company from selling trash bags to nursing homes and hospitals as well as restaurants and hotels.

Grocery stores wouldn’t be able to sell trash can liners, Adrian Hong said in written testimony. It would create a “public health crisis,” he said.

Gabbard said his proposal was in the early stages so lawmakers have time to address such concerns.

The state Senate has passed both bills. They still must get through several House committees and the full House before heading to the governor.

Cindy McMillan, a spokeswoman for Gov. David Ige, said he hasn’t stated a position on the measures yet. / gsg