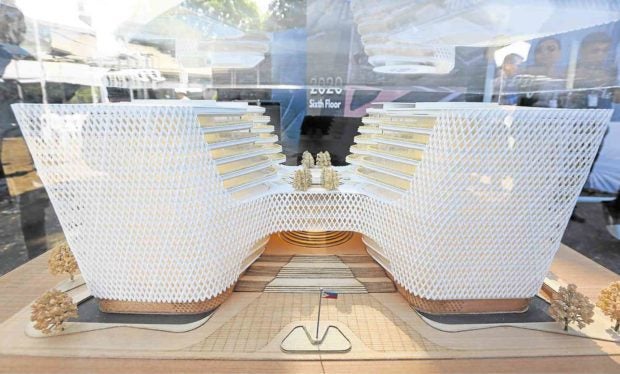 FUTURE SENATE BUILDING A futuristic P8-billion, 11-story Senate headquarters will be built by controversial Hilmarc’s Construction Corp. in sprawling Fort Bonifacio, Taguig City. A model of the new Senate building was displayed during groundbreaking for the project on Monday. —MARIANNE BERMUDEZ

The future home of the Senate in Taguig City will be built by a contractor that it investigated a few years ago in connection with allegedly rigged bidding for infrastructure projects of the Makati City government.

The new Senate headquarters on a 1.8-hectare property at the Philippine Navy Village will have enough space for at least 65 senators, just in case the move for federalism is approved before President Duterte’s six-year term ends in 2022.

Senate President Vicente Sotto III and fellow senators on Monday witnessed the groundbreaking for the new building of the 24-member chamber, an edifice that would cost more than P8 billion in taxpayer money and take 40 months to build.

The contract was awarded to Hilmarc’s Construction Corp., the same company that got embroiled in the allegedly graft-ridden construction of the P2.3-billion Makati City Hall Building II.

Officials of Hilmarc’s were nearly held in contempt by senators in 2014 for their refusal to cooperate when the Senate conducted an inquiry into the issue involving then Vice President Jejomar Binay and his son, then Makati Mayor Jejomar Erwin “Junjun” Binay Jr.

Sen. Antonio Trillanes IV even wanted to ban Hilmarc’s from bidding for government projects until its owners and officers were cleared of the allegations against them.

On Monday, the animosity between officials of Hilmarc’s, led by its chair Efren Canlas, and the senators was clearly gone.

They marked the official start of the construction of the 11-story building designed by American engineering and architectural firm Aecom.

Interestingly, both Trillanes and Sen. Aquilino Pimentel III, who headed the Senate investigation, skipped the event.

“The structure is going to be a worthy bastion of democracy, of free speech, of great ideas … It is going to be an illustrious home for true servants of the people,” Sotto said in his speech.

He said the event was extra special for him as a third-generation politician of his clan.

Sotto noted that his granduncle, the late Sen. Filemon Sotto, was a member of the country’s first Senate in 1916, while his grandfather, Vicente Yap Sotto, was a congressman in 1946.

Speaking with reporters, Sotto said he was happy that the Senate would soon have its own building, noting that the senators are just renting space for 22 years at the Government Service Insurance System (GSIS) complex on Roxas Boulevard in Pasay City.

“Even the old Congress building was just lent to us until 1995,” he said. “This is a great thing for us.”

Sen. Panfilo Lacson reiterated that the Senate having its own building would be more prudent, as it had been paying P127 million in yearly rent to the GSIS.

Lacson sought to ease fears that the construction of the Senate building would be mired in controversy because of Hilmarc’s, which submitted the lowest bid among eight construction companies.

He said Hilmarc’s and the Department of Public Works and Highways had assured the Senate that they would comply with all government policies and regulations.

“I don’t want to say it’s a blessing in disguise … Maybe it’s a paradox of sorts because (Hilmarc’s) will be constructing the Senate building,” Lacson told reporters.

“In the course of discussions (on) how to go about the construction, they said this is their chance to redeem their name because their name was sullied somewhat during the Senate hearings,” he said.

The future Senate headquarters would have four towers within Fort Bonifacio.

The complex was designed to have a three-level parking area for 1,200 cars and offices for at least five dozen senators.

“That’s why we would have a spacious building since there’s now only 24 of us,” Lacson said, adding that the structure would be ready in time for the third session of the 18th Congress in July 2021.

The senators originally earmarked a total of P8.5 billion for the project, but the bid of Hilmarc’s gave them some P500 million in savings.